Why Gonski is unlikely to ever be implemented

The Gonski funding formula is sound but unlikely to ever get up - it requires too much of the states.

If, by some remote possibility, the Gonski funding formula or something like it ever gets up, the Gillard government would, in its brief life, have been responsible for two key reforms to the core of Commonwealth-state relations, on health and education funding.

The health funding model didn’t go far enough, and won’t until the Commonwealth takes over all health funding and establishes a single funding model, but it was a significant step toward a more coherent, logical and efficient funding mechanism across jurisdictional lines.

The funding proposal from David Gonski and his review panel is along similar lines, establishing funding per student based on the best-performing schools, applying it across all sectors, loading funding to reflect the needs of different schools (particularly around disabilities), determine what’s fair for schools already receiving private contributions whether large or small, and the Commonwealth pays 30%.

The current model, as the review points out, is a schemozzle — obscure, lacking in transparency, based on average costs rather than outcomes.

That’s partly a legacy of the Howard government, which as it did on health via the private health insurance rebate, confused good policy with a vast exercise in social engineering. Its SES school funding model was based on John Howard’s personal vision of a taxpayer-funded transformation of Australians  into his ideal of Liberal voters — nuclear families, shareholders, privately schooled, using private health insurance. The conservative Catholic school system was a particular favourite, serving as a low-income distraction from the direction of extraordinary levels of funding to Australia’s richest schools (and the rapid increase in that funding).

Eventually that vision morphed into a simpler mass vote-buying exercise, as Howard’s social engineering gave way to pork-barrelling on an extraordinary scale that left it with a structural budget deficit and a profound sense of entitlement.

It’s a funding model that continues to blight education policy to this day. This government has repeatedly promised that no school will lose any funding, terrified as it is of handing the opposition the sort of weapon they deployed against Mark Latham in 2004.

Fear of the label “class war” thus becomes a tool for entrenching class-based privilege, as usual.

It’s a measure of the extent of the review’s consultation process, and the intelligence of its approach, that private and independent school representatives are so far backing it. The report’s failure to rip and tear at the Howard model — which it was prevented from doing by its terms of reference — has inevitably upset public education groups.

That hasn’t stopped private education fundamentalists like the Centre for Independent Studies from coming out and attacking the review. And Christopher Pyne had the report for less than two hours before emerging yesterday to “welcome” the release of the report and then savage it as a “private school hit list”.

On policy, the opposition is every bit as wretched and contemptible as Labor is on political tactics.

But the funding mechanism necessarily entails an overhaul of all school funding, which means the states must be locked in for this to even be seriously considered. While the government appears to be hastening slowly in sending the process off for yet more consultation, committees and COAG working groups, it’s hard to see how else it could proceed to implement the sort of mechanism Gonski has in mind.

And, of course, no one has billions of dollars lying around — the proposed mechanism would cost around $5 billion more, based on 2009 figures. The states would have to collectively find 70% of that, and Canberra 30%. In practice, Canberra would have to find the lot as a way of getting the states on board. And that assumes they’d be willing to give up control of school funding.

In the meantime, we’re stuck with the detritus of John Howard’s ideological fixations. 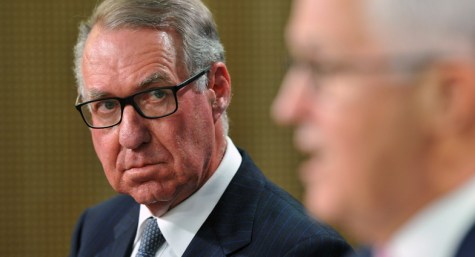 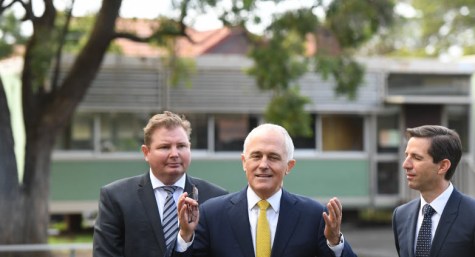 Doin’ the Gonski — a history of the Liberals’ school funding dance

The key to getting the Gonski reforms implemented is to counter the shrill and simplistic argument from the Independent Schools Association that funding is all about “parental choice”. It’s not all about parental choice (for those who can afford it). It’s about productivity, fairness and ensuring that Our children can be active citizens in Australia’s future.

I have broken of after reading “richest schools” which reflects badly on the
writer’s intellect or suggests laziness. What on earth is a “rich” school in
the Australian context – especially if the connotation is automatically and
ipso fact that no assistance is needed for the education of its students?
Some American schools, and a few British ones, have large endowments
of income earnng assets but there are probably none in Australia with
comparable endowments.

So does “rich” mean that the swimming pools and other real estate including
sports grounds and rifle range are valuable? That is just dopey because
they need maintenance and so fees have to be higher to pay for that
maintenance.

When it comes to providing money for school facilities it would be fair to
take account of the ability for so-called “rich” schools to obtain tax subsidies
through deductibility of gifts to their building funds. But why should not
every child’s non-tax-deductible school fees be supported by the same
level of public money as for those going to state schools? If you want to
tack on some public duties such as providing scholarships for those
whose parents can’t afford the fees but would benefit specially from
some aspect of the school then OK, let social engineering begin (but
not go too much further).

Explanation sought on two items:
1. How is it that Geelong Grammar makes a profit larger than the
Government grants it receives?
2. Under what notion is this still supported and defended by a Labor
Government?

The richest schools are those whose parents are overwhelmingly rich and can afford the capital and running costs of their rich facilities and resourcing levels without subsidies from taxpayers.

I agree that a big obstacle is to get the states to agree to effectively pool funding for school education. However, the states are finally reaching that point in vocational education – 17 years after Keating proposed that the Australian Government take it over.