Ware: Oz and Iran’s spheres of influence in Afghanistan side by side

Australia’s and Iran’s spheres of influence in the war-torn country lie devilishly close to each other; indeed, side by side, if not in fact overlapping, writes former CNN and Time correspondent Michael Ware.

Unlike Pakistan, Iran is not yet tacitly involved in attacks on Australian troops in Afghanistan. Not, at least, that we’ve so far heard. But it’s not beyond the realm.

Such a prospect is nothing to be alarmed about, in any event, for it would merely be but part of the wretched business of war. But it should perhaps be noted Australia’s and Iran’s spheres of influence in the war-torn country lie devilishly close to each other; indeed, side by side, if not in fact overlapping.

The Diggers’ area of operations rests in Afghanistan’s Uruzgan province. It’s a wild and woolly place. Always has been. Always will be.

Mountainous and formidable, Uruzgan forms part of the northern rim of south-western Afghanistan. A large chunk of the country that includes the provinces of Zabul, Helmand, Farah and Kandahar — home to the country’s second capital, the birthplace of the Taliban, a city under virtual Taliban siege in recent years. It’s a chunk of Afghanistan that’s seen some of the most intense combat of the war and in which Iran perceives it has legitimate national security interests. Interests it actively pursues.

And fair enough. Before 9/11, Tehran had two enemies at its door. To the west was Saddam Hussein’s regime in Iraq, with whom Iran had fought a bitter and bloody eight-year war in the 1980s. To its east, the theocracy had the Taliban’s Afghanistan. Hostile regimes on its two great borders. And, until just a few months ago, once both those regimes were removed it had massive American forces in their stead. To Iranian strategic thinking, theirs continued to be a hostile neighbourhood.

The US force to Iran’s west is now gone from Iraq but the other remains to its east, in Afghanistan. With our Diggers among them, serving a far more active combat role than they ever did in Iraq.

Tehran’s interest in Uruzgan itself, one would imagine, would be marginal. However, its interest in that region of Afghanistan, and in the outcome of the Western alliance’s mission overall, is considerable. And while we do our best to win Afghan hearts and minds in our military domain, so too does Iran across the same region.

I saw my first signs of Iranian influence around there in 2002, when I lived in Kandahar. Two men accused of being Iranian operatives had been detained and were being, rather unkindly, held in the compound of Kandahar’s chief of police. They were bound and blindfolded and squatting in the dirt facing a grimy concrete wall. A young boy stood guard over them, his AK-47 lazily nosing in their general direction. They’d been detained with a truck full of what I was told was Iranian humanitarian aid — blankets, clothes, some feed — underneath which the Afghan authorities claimed were bundles of cash and weapons.

The men and materiel, I was told, were found in Helmand province, bound for that province’s rugged northern strongholds, near the hamlet of Baghran. That’s an area touching upon the Aussie troops’ Uruzgan and is part of a well-worn rat — or supply — line linking the two provinces. Hours after I saw them, the men were gone from the police compound. I shudder to think what ever became of them.

Since then Tehran’s activities have stepped up in the region. Quite somewhat. Just outside the perimeter of the enormous American base at Kandahar airfield, in 2009 I sat in the neat and humble office of Brigadier General Shir Mohammed Zazai, commander of the Afghan army’s 205th Hero Corps. When I asked the stern-looking general about Iran, the silent American advisers flanking him visibly flinched. But the general did not.

“Unfortunately”, the general began, “we’re finding many weapons with Iranian markings and many explosives with similar markings (in the hands of the Taliban).” However Iran’s covert operations had increased, he said, since the ad hoc discovery of weapons I had encountered seven years before. “Right now we have lots of evidence of people being educated in Iranian madrassah (religious schools) and given military instruction and then being sent here, with orders to conduct combat operations in this part of Afghanistan.”

The US military has for a while now reported the deployment of a particular style of roadside bomb in this region of Afghanistan that is often a hallmark of Iran’s hand. Known as an EFP — Explosively Formed Penetrator — it is a stunningly simple yet brutal device that fires a ball of molten copper that easily punches through the heaviest American armour. It has been a signature of Iranian-backed militia in Iraq and of Hezbollah in Lebanon. Its appearance on the Afghan battlefield heralded a new declaration of Iranian intent in that conflict.

I asked the Australian Defence Force (ADF) about any evidence of the deployment of EFPs in the Uruzgan region and the ADF provided the following comment: “Defence has no record of an IED incorporating an Explosively Formed Penetrator being used or found in Uruzgan Province.”

Traces of Iranian covert operations within the vicinity of our troops, however, is not the point. But our troops’ proximity to Iran’s active interests is.

So too our interests away from the battlefield, in Tehran itself. There, virtually unbeknownst to the Aussie punter, Australia plays a meaningful role in advancing Western interests.

Unlike the United States, Australia maintains an outpost of diplomacy in the Persian capital. Our embassy in Tehran, reasonably untroubled by pesky Australian tourists seeking consular services, is regarded by some in the West as a vital listening post. I know for a fact, for instance, that our well-regarded ambassador’s cables during the bloody unrest of Iran’s elections were read keenly and furtively by myriad foreign intelligence agencies with whom we share such things.

While France and Germany and other liberal democracies also have embassies, few are regarded by Washington to be the allies we are, certainly in a post-9/11 world. And unlike the Brits, with their imperial Shah-backing oil-sucking legacy (yes, I’m looking at you, BP) in Iran, our mission has not been recently attacked by regime-friendly protesters.

For mine, none of this bodes badly. Indeed these pinpricks of information only highlight why distant machinations over Iran’s nuclear ambitions, the increased militarisation of straits, and the ratcheting of sanctions should be followed with at least muted interest by a somnambulistic Australian public. Or, at least, offer some background to our Minister for Foreign Affairs’ seemingly feverish diplomacy over Iran of late. 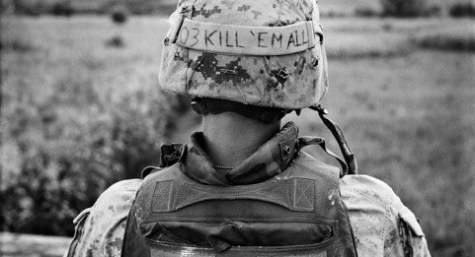 The grim, deadly reminders that the war in Afghanistan has failed

In Afghanistan, we fought a smart war in dumb ways

Just a minor point – EFP is just a fancy name for a hollow/shaped charge/HEAT (High Explosive Anti Tank) warhead. All it is is WWII anti-tank shell technology adapted for roadside bombs. I get p*ssed off when it gets breathlessly presented as some form of cutting-edge weapon.

In the past six months I notice it has bit-by-bit started – the US and Israel villifying Iran; each day a little more nasty Iran related news is trickled out for media and public consumption. Soon the trickle will become a flood and the US/Israel alliance will manufacture a fully justified reason to commence a war with Iran (remember the WMD justifications used to commence the Iraq conflict) and the Communist bogeyman reason to justify the Vietnam conflict before Iraq. I hope I’m wrong, but given past form, there would be no surprise to yet again see Australia begging to become part of that conflict too. I also note the US is the only nation to drop the atomic bomb in anger (again with full justification) on another resulting in thousands of civilian casualties but thats OK as it is the good ol’ USA. Yhe worlds largest manufacturer of WMD.

Excellent article and good backgrounding of aspects rarely, if ever, covered.
Is it any wonder that Iran would see nukes as a protection – they aren’t crazy enough to think of first use – when the saw what happened to Libya once it tried to cozy up to the West, including full photo-ops with Blair & BungaBunga.
As always, the Septics can be relied upon to do the wrong thing for the wrong reasons and it will end badly.
And, as usual, Oz will be the spear carrier & combat fodder for their idiocies.