You don't like it, you detest it in fact, but sorry people, this is real and this is happening.

You don’t like it, you detest it in fact, but sorry people, this is real and this is happening. The Labor government is tearing itself apart. 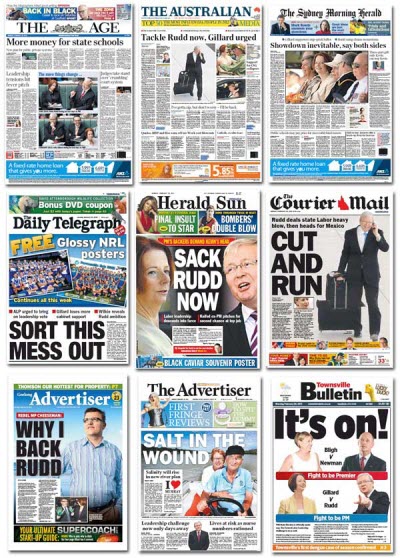 The media machine needs to be fed to generate that amount of front pages, and this past weekend was a veritable feast for them. Most importantly, the all-you-can-eat buffet wasn’t supplied by anonymous sources but MPs like Darren Cheeseman, who claimed Rudd was the only man who could get the government re-elected, and Steve Gibbons, who spat from the other camp with priceless lines like “only a psychopath with a giant ego would line up again after being comprehensively rejected by the overwhelming majority of colleagues”.

And all because Kevin Rudd said f-ck.

Well, not really, but the leak of outtakes of then-PM Rudd expressing frustration over a speech, and employing fruity phrases like “dickheads at the embassy” in the process, has tipped this entire affair into open warfare — silly, ridiculous school yard warfare, but warfare nonetheless.

We’re in for at least another week of the media scrabbling for new quotes from rent-a-heads (hello Peter Beattie) because until our current Foreign Minister wings his way back into the country no challenge can be mounted.

Whether he has the numbers is another question entirely, and one that you can be sure will be hashed and rehashed over in the coming days.

In the meantime, did you hear? The Queensland election kicked off officially yesterday. Yes, it feels like the LNP’s Campbell Newman and incumbent Premier Anna Bligh have been on the trail for weeks, but yesterday the eight-week-long official campaign officially kicked off and will grind on until March 24. Bligh also joined the chorus of quotes on the leadership speculation — she practically begged federal Labor to sort it out — and she would, given she’s being starved of oxygen right now.

Much has been made of the fact this leadership speculation is all about personality over policy. Everyone is talking about the fact Rudd is horrible to work with but adored by the public, and that Gillard is the complete opposite — a dream to work with, the lynch pin to making minority government work, but loathed by the public.

No one’s actually talking about policy. We promise to continue to. We can’t ignore the massacre that’s taking place in public at the hands of the Labor Party, but we will also be covering the other stuff. Starting with comprehensive coverage of the Queensland election, including analysis by Poll Bludger‘s William Bowe, on-the-ground coverage by Brisbane-based writer Benjamin Law and a special joint investigation we’re kicking off today in conjunction with FAQ Research.

CSG: Behind the Seams is a dedicated series devoted to demystifying the facts and answering the frequently-asked questions around the contentious issue of coal seam gas — one of the issues set to dominate the federal election. The investigation will canvass participants in the debate and affected citizens to put their own point of view, test that point of view against expert knowledge and provide a space for real-time debate as the campaign unfolds. A group blog will accompany the coverage, as well as interviews with the main players and on-the-ground reportage.

Later this afternoon, we’ll have our Canberra correspondent Bernard Keane file on the Gonski review into education funding in this country, with info fresh from the lock-up that ends at 12.45pm. Check back to the website.

A few little wins there for those who value substance over style, policy over personality. For everyone else, we’ll see if we can dig up new footage of someone saying the f-word.

I am very annoyed that Labor has destroyed what should have been a good chance of governing for 3 terms.

What do you mean “Everyone is talking about the fact Rudd is horrible to work with but adored by the public”? It was because it appeared that he couldn’t lead Labor to an election win that he was dumped in the first place, and ever since he has sulked and put himself ahead of the party. I, for one, would never vote for him again.

Self fulfilling prophecy by lazy mob of reptile parasites. You must be proud of yourselves. We have the worst press in the world and Crappy is a prime example of the problem. I know now what Frank Sinatra was talking about.