The federal government's efficiency dividend is causing real pain for cultural bodies, with key museums and institutions forced to delay exhibitions and lay off dozens of staff.

The federal government’s efficiency dividend is causing real pain for cultural bodies, with key museums and institutions forced to delay exhibitions and lay off dozens of staff.

Last night Senate estimates heard federally funded bodies the National Gallery of Australia, Screen Australia, the National Library and the National Film and Sound Archive have all cut staffing numbers. The boards were asked to make significant savings as part of Labor’s ongoing drive to bring the budget back into surplus.

In answers to questions put to the various institutions by Greens Senator Christine Milne, the various cultural institutions revealed up to 64 jobs have been lost, or are planned to be be shed, through voluntary redundancies and natural attrition. The National Museum has shed 20 positions through voluntary redundancies, the National Gallery has lost 17 positions through natural attrition, the National Library of Australia has 11 fewer staff, and the Film and Sound Archive will lose seven.

The cumulative impact of the ongoing efficiency dividends since 2008 can be seen in the impact they have had on another federal cultural agency, the Australia Council. Since 2007, the national arts funding and advisory agency has moved from about 150 full-time equivalent positions to a figure of 112.6, according to last year’s annual report.

A spokesman for the Australia Council cautioned that not all these job losses could be slated to the efficiency dividend. But it is clear the dividend, increased in the 2011 budget to 1.5%, is hurting.

In the early years of the dividend, the Australia Council’s management under Kathy Keele opted to quarantine grants to artists and organisations from the cuts, imposing the haircut on the council’s operational expenses instead. That led to a reduction in staff from 150 to 122 in 2008, including 13 redundancies, according to Keele at the time.

But as the efficiency dividend has rolled on, the Australia Council has been forced to start reducing grant funding too. As Crikey reported in May, the council’s 2011 Portfolio Budget Statement forecasts a reduction in grant funding of $2.5 million over 2010-11 figures.

The efficiency dividend is also beginning to affect the operations of the national cultural institutions. The National Library told Senators it had reduced its level of retrospective cataloguing, increased charges for inter-library loans, reduced the level of support for internal help desks, reduced its IT services, restricted the number of public events and made significant reductions in supplier expenditure. The National Museum reduced the number of smaller exhibitions from 12 to six. The Film and Sound Archive admitted the progress it is making in digitising the archive “is limited by the resources we have”.

The National Gallery’s director Ron Radford told Senator Milne last night that two major exhibitions had been postponed. “For instance, the National Aboriginal Triennial will now take place this year instead of last year,” he stated. “We have reduced the number of touring exhibitions by a small amount … we have not filled jobs by attrition, we’ve let 17 staff go in the last year.”

The efficiency dividend has long been known to unfairly disadvantage small agencies. Unlike large departments with significant opportunities for cuts in expense items such as consultancies and travel, the small cultural agencies are already lean organisations in which staff and operational costs make up a large proportion of their budgets. As the Senate estimates testimony demonstrates, the ongoing need to meet the new dividends each year has started to affect programming and services.

Wrapping up her questioning last night, Milne asked Radford what the impact of ongoing efficiency dividends would be.

“If it continues for the next many many decades, there’ll be no money left for anyone,” Radford responded. “I think that’s logical, isn’t it?”

The arts: dividend squeeze, but cash for Wolverine and galleries 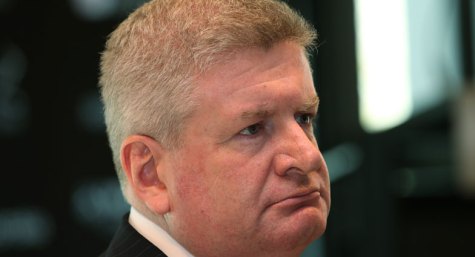 The attrition method is a cop-out. Less pain for managements. But who leaves? Those with a better offer. Who stays?

An extra piece of info. The Australia Council, as you write, met the efficiency dividend with cuts to its admin and staff costs, which is very principled and admirable. Last year, it decided it could go no further with that and would have to cut into the funds that go to artists and arts organisations.

However, the major organisations have been exempted from these cuts, meaning that the whole burden goes onto the smaller organisations and individual artists.

I’m not one for putting the boot into the major organisations but on equity grounds alone I cannot see why they should not share the pain.

How were they exempted? Did they lobby? In that case, better that they could succeed only if they lobbied for the entire arts sector, not just themselves.

Or maybe it was because if they were cut, they would go back into deficit even earlier in their cycle than usual, creating stress in government and funding bodies. But the little guys have the same problem: it’s just that they cannot squark loudly enough for the media to make a story of it, or for the government to be forced to rescue them.

I’ve been waiting for someone to give an authoritative account of where the strange idea of ‘efficiency dividend’ comes from. The name suggests a source in the familiar economists’ idea that productivity in non-market activities increases roughly at the same rate as it does in the economy overall. This suggests that public service agencies require less funding over time to maintain their normal output.

Yet, this kind of explanation is clearly incomplete since it suggests that funding cuts should be kept to approximately the level of productivity increases in the economy as a whole. What happens in practice is that governments ignore this limitation and impose whatever cuts they think they can get away with.. To account for this, we would have to assume some real animus against the public service, something that would not be at all surprising on the right of politics but is really surprising coming from parties with leftish pretentions.