There are two problems with this good news story: trend data, and data integrity, writes Michael Overell, on the RecruitLoop blog

Job ads in Australia increased 6.4% from December to January, according to recent data. This was the biggest monthly increase since 2010. Commentators wet themselves in delight: “Job ads hit two-year high“. Politicians even got in on the game, with the federal Treasurer claiming this as a reminder that our economic fundamentals are strong.

Surely this is great news? Well no, not necessarily. There are two problems with this good news story: trend data, and data integrity.

Don’t yawn — this is a simple case of reading the fine print. We’ll keep it light, and also call out some funky practices that could make these employment “statistics” look more like “damn lies”.

Job ads might have increased 6.4% since December. But from a year earlier, the rise was only 1.4%. Less impressive? You bet. A more relevant comparison? Unfortunately, yep. But a 1% annual increase doesn’t help any headline get more clicks. Much easier to bury that stat deep in the article. Or better yet, just leave it out.

An obvious issue in any December-January comparison is the holiday season. ANZ acknowledges this issue in its commentary of the data: “Even after seasonal adjustments, there was considerable volatility in the job ad data in December and January, as often happens this time of year due to the large swings in advertising over the holiday period. This means emerging trends are more tentative than usual.”

For those who want to use these headline statistics to push their own agenda, the relevant measure would be trend data. That is, average changes in the data over a fixed period. Unfortunately the news on this front isn’t good. ANZ reports: “In trend terms, total job ads rose by 0.5% in January to be 2.6% lower than a year earlier.”

As for data integrity, that points to potentially bigger issues than a few commentators neglecting the fine print: does a measure of job ads actually tell us anything?

ANZ would like us to think so. It proudly references a 2003 report from the Australian Bureau of Statistics, which analyses the leading indicators of employment growth over the period 1984-2002: “The ABS analysis finds that the ANZ job advertisement series has a correlation coefficient of 0.75 with employment growth at a lead period of three quarters.”

But again, reading the fine print: this correlation applies only to ANZ newspaper jobs series. Not online job ads. In 2002, Seek.com.au (Australia’s top job site with 70% market share) was only five years old, and still a private company. Online jobs were less than 15% of the total jobs market.

Today, 83% of all job ads are online. Newspaper job ads are dying a slow death. So, if we’re going to use measures of “job ads” for any purpose, we need to ask whether online job numbers bear any relationship to actual employment growth. So far the answer is “we don’t know”.

I’m not going to run a correlation analysis, but we can take a quick look at the integrity of online jobs data. That’s more fun anyway, and confirms some funky practices that could impact the ability of online job numbers to tell us anything about real employment.

We’ve all heard stories of recruiters and companies playing funny buggers with online job ads. Multiple postings and dummy job ads are the most common complaint. Candidates are the big loser in this game. Unless, of course, this behaviour starts to obscure any genuine trends, and real decisions are then based on this data. A quick search on Seek (February 8, 2012) does indeed confirm some funny business. Like the same job ad posted twice — in the same day …

And the jackpot: the same job ad, on multiple dates, categories and different agencies … 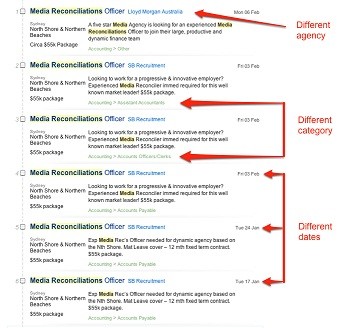 Clearly, the job data ain’t right. Were these practices common in the old “newspaper” days? Almost certainly not to the same extent. A newspaper ad would cost an employer/agency thousands of dollars, whereas a high-volume advertiser on Seek can post ads for less than $50.

What do these practices mean for our measures of employment trends? The fact is we don’t know. In its last published report (2005 — that’s seven years ago), ANZ actually stated: “So far, no statistically robust relationship exists between total (newspaper plus internet) job ads and employment growth.” But they still report the data, and commentators happily quote as if it means anything for real employment trends.

Until we can be confident of any relationship between online job ad data and real employment growth, we should beware any measure of job ads. We can only hope our policy makers do the same.

*This article was first published on the RecruitLoop blog

Which is the better indicator: newspaper or internet job ads?

As employers (and govts) flee papers, how do we measure job ads?

Good article.
I coordinate a university postgraduate degree. In the past I kept a bulletin board with newspaper advertisements for positions vacant. Now I don’t bother.
Some employers don’t spend good money on web advertising for specialist vacancies. They do however circulate job descriptions to industry newsletters and people in my position. Sometimes they just ask us to draw them up a short list for entry level jobs. That takes time, but it is worth the effort as prospective students now see our degree as a sure pathway to a new career.

I’ve found a recruitment firm that posted a bogus ad and then uploaded my entire resume (including my home phone number) to an online website without asking my permission – presumably so they could then on-sell that data. There are some very dodgy operators out there these days.