How the ‘resource curse’ eats at the heart of Bougainville

Bougainvilleans may have won the war but the peace has left years of inertia, and a province desperately needing rehabilitation.

The rusted air vent is deafening and a whoosh echoes around the pit. Copper-polluted water sits in a pool nearby and trees are starting to take over the graded hillside. Rocky, uneven ground is where locals pan for gold, hoping to find a few grams to make some money for families living in nearby villages. Seven kilometres wide at its broadest point, the Rio Tinto-controlled Bougainville copper mine in Papua New Guinea hasn’t been in operation for nearly 25 years, yet still dominates the local landscape.

Dozens of massive trucks lie inoperable. Oil drips from their engines and runs downstream. A loud, machine-like sound is heard in the pit. The vent is sucking air directly into a pipe that takes water outside the mine itself. It is this device that allows the mine not to fill up completely with water when it rains constantly during the rainy season. It has been making this booming sound 24 hours a day for the past two decades.

The island’s brutal war from 1989 to 1997 caused the death of many thousands, maimed countless others and involved Australia arming, training and funding Port Moresby to oppose the rebellion. Former PNG leader Michael Somare accuses Rio Tinto of violently suppressing rebels opposed to the mine during the “crisis”.

Bougainvilleans may have won the war but the peace has left years of inertia, and a province desperately in need of rehabilitation.

The town closest to Panguna mine, Awara, feels stuck in time, old buildings are devoured by lush jungle, Shell and Mobil service stations decay on the side of the road. The locals are used to the poor infrastructure and housing and there are few active services for the dwindling population.

“The mine was never really closed,” says Josephine, manager of the Arawa Women’s Training Centre. “Workers and the company just fled.”

Rio Tinto refuses to properly clean up its mess. Kilometres of tailings — waste dumped by mine operators — have caused a once clear river and land to be turned into desert.

“I remember when this used to be all green back in the 1960s,” says Willy, in faded polo shirt, grey shorts and bare feet, a former leader in the Bougainville Revolutionary Army who accompanies me to the area. “We used to tell the mine owners for years that they were polluting everything but they ignored us. We had no choice but to fight for our rights over the land.”

The local community is divided over whether to try and reopen the mine as a healthy source of income before a planned independence referendum in the next year or develop adventure tourism and sustainable farming.

The owner of the mine, Bougainville Copper Limited, has a website that claims its future is bright. Peter Taylor, chairman and managing director of Bougainville Copper, told Radio Australia in 2011 that he was ready to reopen the mine but he made no comment about cleaning up the ecological disaster his company created last time. He blamed some “small but strong [local] pockets of opposition” to his firm’s re-entry.

The only person I meet who adamantly opposes any kind of mining is the man who protects a checkpoint that every Westerner has to pass to enter the mining area. I visit “Commander Alex” the day before my visit to explain the purpose of my trip and obtain permission. A $100 fee is paid, and an invoice issued, to prove I am there for the right reasons. He says he will stay at the checkpoint until compensation is fully paid to all those deserve it. He lives at the checkpoint 24 hours a day.

Willy’s fears reflect many people’s that I hear. He worries about further ecological catastrophe if Panguna re-establishes itself but is torn between dual desires; supporting a young population who are currently experiencing a baby boom while also providing adequate compensation for the former fighters and families who suffered during the “crisis” (the only word I hear used to describe the bloodshed).

Nobody has faith in politicians in either Bougainville or Port Moresby and Willy knows Canberra talks about avoiding “failed states” on its doorstep. For this reason, he worries Australia will not support independence for the province. But perhaps China will, he suggests, and exert influence as they are currently doing in East Timor, Mongolia and beyond.

A man in his early 60s who lives in a decaying weatherboard house on the outskirts of Awara, Willy told me he hasn’t seen his young grandchildren for five years because they live in an inaccessible area near town and he can’t afford to hire a truck to get there.

Individuals in Bougainville acknowledge the economic weakness of their position if they want independence. They need investment, trust and foreign capital. One of the former leaders of the Bougainville revolution, Samuel Kauona, is upbeat, however.

He tells me about his vision for the island, namely independence and sustainable mining. He talks about the 500-year history of foreign powers, including Australia, not allowing Bougainville to exercise autonomy. For him, keeping the massive mineral wealth in local hands is essential: “This is why we fought the war.”

Samuel is shortly to present to the Bougainville Autonomous Government the first mining exploration since the end of the “crisis”, a desire to examine land that he believes contains gold and silver (conservative estimates I hear claim that billions of dollars worth of gold, copper and silver remain undiscovered in the province). Only then will overseas companies be allowed to assist locals in exploiting the resources but Bougainville landowners will be the primary driver of the projects.

He explains how his insurgency beat the PNG army, its patron, the Australian government and Rio Tinto in the “crisis”. His men knew the terrain and opponents were no match for their guerilla tactics. Kauona says that the Americans in Iraq and Afghanistan faced the same adversary but arrogantly believed they could win with counter-insurgency tactics.

Perhaps Samuel’s most provocative suggestion is to cut Australia’s aid budget to PNG (Canberra currently gives close to $500 million annually). “I would stop all the aid tomorrow,” he says. “It’s not making people self-sufficient.” He has little time for the influx of old men in parliament in Moresby and Bougainville. “We need young people to lead [a not too subtle dig at Michael Somare, a man for whom I find no support on the island].”

Samuel would not be pleased with a view I heard in Port Moresby from some local NGO employees who say they hope and pray Australia reclaims control over PNG and teaches them to properly manage the nation. I respond by saying I can’t think of any other example globally where the formerly colonised request the coloniser to control them again. “Things are desperate here,” one responds tartly.

These sentiments are not universal. Bougainville hotel manager Josephine, a strong figure in her ’50s with fuzzy black and blonde hair and blue-and-red dress, explains that her vision is for Western tourists to come and hike around Bougainville and a robust agricultural sector flourishing in the fertile ground. The record of Panguna mine is so bad, she says, that it is almost unimaginable for it to return.

PNG and civil strife is high on the agenda 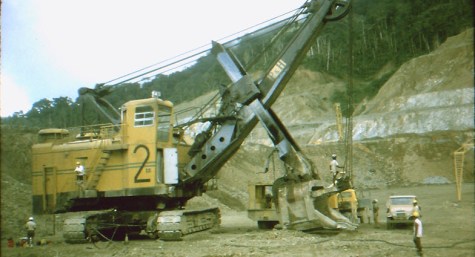 New report signals bright outlook for Bougainville, despite dark past

Great article. What is really sad is the damage seen here is being repeated around the country. There are many local river systems, the lifeblood of local villagers survival, being poisoned by the by-products of mining.

They ARE desperate here, and its far from just an isolated opinion of ‘ some local NGO employees’ that ‘Australia reclaims control over PNG’. I find that its a common wish.

Independence was sought to early and was not managed well, infrastrucutre has been allowed to rot, im talking about roads, sewage, power lines, water mains, the basics.

It is terribly depressing to see the state that PNG is in, all this money from the LNG project, and nothing, no matter what O’Neill’s mob say, is trickling down to the people.

Given that the entire footprint of the mine including all downstream tailings is well less than 1% of the island, why can’t they do both?

And if the “Only then (after locals have done the exploration) will overseas companies be allowed to assist locals in exploiting the resources but Bougainville landowners will be the primary driver of the projects” mineral industry model works, it will be a world first.

When I think about Ok Tedi and recently seeing f the King/Queen rivers in Tasmania, I shudder at the damage caused by copper mining tailings.