Greens: we are not hypocrites when it comes to donations

For some in the Greens, the $1.68 million donation meant success at the 2010 federal election, but I wonder if it was worth it considering the ongoing criticism the party is now receiving, writes Dr Noman Thompson, director of the Greens NSW Democracy4Sale project.

These days I am not so much congratulated on the Greens’ great work in cleaning up political donations as asked if the party has sold out for taking $1.68 million dollars from one individual, Graeme Wood, founder of Wotif.

However, I know that Lee, having led the Greens NSW’s influential campaign to clean up political donations for nearly a decade, has queried the value of accepting this donation .

For some in the Greens, the $1.68 million donation meant success at the 2010 federal election, but I wonder if it was worth it considering the ongoing criticism the party is now receiving. This is a dilemma for the Australian Greens as under the current system our party is penalised as we cannot compete with Labor and the Coalition parties in the all-important area of election campaign advertising.

Rather than accept million-dollar donations we could use fund-raising as an organising tool and work to mobilise many smaller donations. That would be more sustainable in terms of ongoing fund-raising and have the added benefit of involving members and supporters.

None of this $1.68 million was spent on Lee’s campaign to win a NSW Senate spot. While we did not have a huge budget for advertising in the NSW Greens campaign, we have received extensive media coverage for our consistent and principled work in this area.

The Greens are a confederation of eight state and territory parties. In NSW, our policy, which we stick to, is to take no money from corporations or other organisations and limit donations from non-members to $10,000. I know many members and supporters are disturbed about accepting this cheque.

We need to closely consider what taking this big donation says about the Greens, especially considering part of the success of the Greens is that we are seen as different from Labor and the Coalition parties.

The closest donation to the Greens $1.68 million was $959,000 to the National and Liberal parties from mining boss Clive Palmer.

The Australian public are deeply troubled by the impact of political donations. The perception is strong that those who donate gain influence above and beyond the average person.

Now it appears the Greens are in the same league as the old parties.

Having worked on electoral funding reform for a decade, as director of the the Greens NSW Democracy4sale project, this new situation concerns me.

The Graeme Wood donation is now on the books, but in NSW we will continue to campaign hard to reform electoral funding laws so corporate donations are wiped from the political landscape. 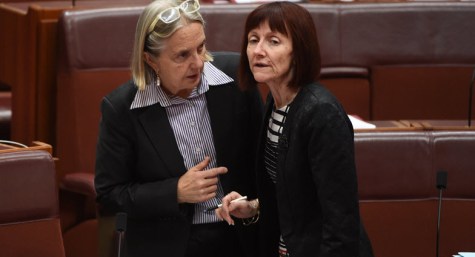 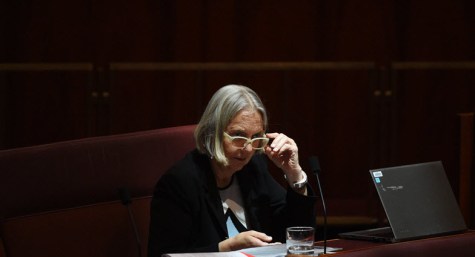 Clowns to the left, jokers to the right: Greens, Libs wrestle with party memberships

The difficulty with not accepting the occasional big donation is that you are not able to keep up with the other big teams in the ball park. You can not possibly do the same level of advertising and “persuasion” during elections as the established big parties.

IF the rule came in that no political party or politician could accept a donation from an individual or an organisation in any one year, of (say) more than $10,000 – the Greens would jump at the idea, and fully support it, and then play the game that way.

But until the rule comes in for all, it is self-defeating to not take the occasional large donation to buy advertising time and space. So long as the donor is already in agreement with the Party’s policies and is not expecting nor will have any undue influence over the party – then take the money … for now.

But ideally, let’s see the rules change so there is a lid on who can give to any party or politician in any one year.

I am not a member of the Greens. While I do support Jim’s idea on this one, there is a world of difference between the one off donation mentioned, from an individual, and the constant supply of funds from corporations into the main politcal parties. This is where the hypocrisy lies, in pretending that there is no payback. Someone may like to pretend that the privatisations we have experienced in Labor states over the past few years have no corrupt basis, as Michael Caton would say “they’re dreaming”

I agree with you Michael. He who pays the piper….

Perhaps the NSW Green should succeed from the “corrupt” Feds, huh?

The Monthly’s report on all this was pretty interesting. I’d read most of their cover story (not on Crikey!) before but coming from left field marks quite a significant and refreshing change in political discussion in this country. Long live the free independent press.

Anyway, who says Mr Wood is not getting value for money? That whole pulp mill Tamar deal, and the magnate’s plans for the site, are on the nose, and the Greens can’t run away from the stench of his dollars.

Gangrene, gaseous or otherwise – presumably Green should succeed from the “corrupt” Feds you meant secede. Your grasp of English seems no better than your grasp of ethics, principle or logic.
What stench from the Woods donation? It was OPEN when made, not buried for (too) many months as per the majors, his plans for the Tamar mill are the epitome of altruism, employing people in a non destructive (if not immediately profitable) enterprise, purely because it is the decent thing to do.
For shame that none of our filthy lucre billionaires have a shred of his integrity.