Misogyny isn’t why Gillard is in trouble

Is criticism of Julia Gillard's performance as prime minister sexist, as Bob Brown suggests? Is the current bout of leadership rumbling reflective of the febrile, misogynist minds of male media commentators?

Is criticism of Julia Gillard’s performance as prime minister sexist, as Bob Brown suggests? Is the current bout of leadership rumbling reflective of the febrile, misogynist minds of male media commentators?

Or, as many Crikey readers think, is it all just another media beat-up?

Gillard has undoubtedly been the subject of gender-based criticism in the media. Some of the coverage from The Daily Telegraph and The Australian during the 2010 election campaign was disgusting in its crass misogyny. In November, she was the subject of a disgraceful newspaper attack comparing her to a schoolgirl during the visit of Barack Obama.

But it doesn’t follow that Gillard is currently the victim of sexist criticism from male journalists (for one thing, last time we checked, there were plenty of female journalists in the press gallery giving Gillard a serve).

It’s not male commentators that caused Gillard’s poor performance at the Labor conference in December, nor did they have a hand in her inept reshuffle soon after. They didn’t compel her to abandon her agreement with Andrew Wilkie. They didn’t dispatch her media adviser to play political games on Australia Day.

Nor do they invent the polls that have shown, week in and week out, for nearly a year, that Labor’s vote is a disaster under Gillard and she is simply not liked or trusted by voters.

Gillard’s government in fact has been effective in policy terms: she has delivered significant reforms, although they’re hardly the historic achievements she insists they are. Wayne Swan’s economic management has been excellent. But as prime minister, Gillard has been almost spectacularly inept at the basic stuff of politics: telling voters what her personal vision is for Australia, what she wants to achieve in her current term, and how she intends to do it.

That’s why she’s in deep trouble and unlikely to reach the end of the year as leader. Anyone who thinks it’s a media conspiracy, whether s-xist or otherwise, is blind to the simple reality of politics. 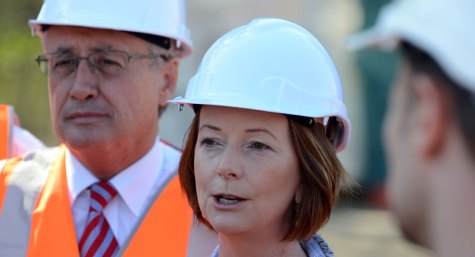 trust Sir Bob to come out with that piece of tripe, he has been blameing the media every day for every single thing wrong with the greens since 2004
As a “Crikey Reader” I do not believe Gillard has faced any greater “beat up” by the media than any other PM. Gee, short memory if you can’t remember to lovely things said during Honest Johns reign,

Gillards gov has not been effective in any policy terms what so ever. She has been playing Twister with wacko cross benches and the greens and has fell flat on her face time and time again.

Swan’s economic management excellent, you have got to be kidding, who wrote this? Some ALP political hack.
“unlikely to reach the end of the year” !?! can’t believe she survived the christmas break.

That it comes from a man is not a requirement for commentary to be sexist – people of both genders buy into the current patriarchal system. That said, this government has made way too many silly political mistakes for which it deserves criticism, but then there’s a heaping of misogynistic commentary piled on top of the deserved criticism. That misogynistic commentary has come from both men and women in the media, not just from people with “ditch the witch” (insert rhyming words to preference) placards.

And yes if the media analysed and banged on about the “we know nothing, and we’re humbled” Rupert and James Murdoch like they do about Julia, the Murdochs would be out on parole by now. Furthermore, if Julia had appeared in public like the fearless “see me, I’m everwhere” Tony Abbott in his little man-kini what a media outrage there would have been. It’s no wonder the printed media circulation continues to dwindle and rightly so with the crap (that passes for journalism) they mostly continue to peddle. Julia and the ALP could do better by having advisers that are a bit more street smart and worked out talking points, that she and ALP ministers use to start mocking the media with their incessant beat-ups. Joh Bjelke-Petersen knew all about feeding the “media chooks” and yes in the end had them eating out of his hand. Bob Hawke deftly used to mock the media chooks with great success and just laughed off any obvious media crap.

I’m not sure Bob’s doing Julia any favours by defending her, but perhaps that’s his intent.

… And Bob is an honourable man.

I fail to understand why it was ‘disgraceful’ of a newspaper to compare Gillard to a schoolgirl whilst in Obama’s presence. This was precisely how her demeanour struck me.

All leaders need a thick hide and if they don’t possess one they should not run for office. There are many power perks at the top, the downside is being subject to ridicule by those who give you the privileges.