There were more clues on Gina Rinehart in another unauthorised account of her life and very rich times in, ironically, another Fairfax title, the Good Weekend magazine, last Saturday. Plus other media news.

Gina Rinehart: the unauthorised bio. One Fairfax journalist watching the market moves of Gina Rinehart particularly closely is senior business scribe Adele Ferguson. Ferguson, a contributor across The Sydney Morning Herald and The Age, has written the book on Rinehart — literally — and is now furiously making changes with publisher Pan Macmillan to include the billionaire upping her stake in Fairfax.

“Definitely including the Fairfax play into it and hoping for the suppression order to be lifted on the court case with the Rinehart children,” the long-time Rinehart watcher told us today. The release date isn’t set in stone, but is likely to be in late May or early June. — Jason Whittaker

Fairfax on Gina, Gina on Fairfax. There were more clues on Gina Rinehart in another unauthorised account of her life and very rich times in, ironically, another Fairfax title, the Good Weekend magazine, last Saturday. And some warnings, perhaps, for journalists at the company’s media entities. For a start, writer Jane Cadzow noted, Rinehart isn’t big on criticism — particularly from the media:

“The princess of the Pilbara doesn’t shout. She sues. While her friends stay silent about her for fear of falling out of favour, her critics watch their words because they don’t want to get a writ. Lawyer Nick Styant-Browne knows from personal experience how relentless a litigant she can be. ‘Indefatigable. She does not give up,’ says Styant-Browne, who acted for Hancock’s third wife, Rose, in the epic battle that erupted when the old man died in 1992 …

“A person who has known her a long time says she divides the world into friends and enemies: unless you actively support her, she presumes that you are against her. And since journalists aim for impartiality, they fall into the latter category. ‘All journalists are communists,’ he says, summing up his interpretation of Rinehart’s attitude, ‘and all media proprietors are weak.’ Despite her Fairfax shareholding, she is said to particularly dislike reporters from this company. Waiting to hear back from her, I cross my fingers that she hasn’t read an article about the Government House garden party on the websites of The Age and The Sydney Morning Herald. It is headlined ‘Prince Philip pokes fun at Gina Rinehart’, and quotes a bystander who claims to have heard the prince say, ‘That hat could poke someone’s eye out.'”

Gina had read it all right, and wasn’t a fan. Mark Bickerton, the “Information Manager” at Rinehart’s Hancock Prospecting, fired back at Cadzow in an email that made her wonder “whether Rinehart had a hand in composing it”:

“Regarding the recent discussion with HRH at Government House in West Australia, other media who were present reported it was a very happy and relaxed discussion between HRH and Mrs Rinehart … Your publication however chose to make the extraordinary and unbelievable claim that HRH told Mrs Rinehart that her non-pointy hat was pointy and may poke someone’s eye out! Obviously HRH would have seen many hats over the years and would not choose to stop to speak to someone for the purpose of criticising their hat, including a hat worn in honour of his wife, the Queen. This is an insult by the SMH to not only Mrs Rinehart, but importantly HRH.”

Pointy hats aside, Cadzow then provided more clues on what Fairfax staff can expect if Rinehart muscles onto the board:

“Rinehart is the sort of boss who inspires devotion in some and rebellion in others. ‘She treats her employees well but you don’t cross her: it’s ‘Yes, Mrs Rinehart’, ‘No, Mrs Rinehart’,’ says one who found the atmosphere so oppressive she eventually left. Another person, who insisted on calling her Gina (‘I was older than her’) and now works for another resources group, says Rinehart’s management style did not sit well with some senior staff. ‘As an executive, you want to have a bit of autonomy and know you’ve got some areas where you can make decisions,’ he says. ‘But she used to make all the major calls. And of course, if you end up disagreeing with her, ‘You’re outta here!’ ’ He laughs. ‘Doesn’t take ‘no’ well.'”

There were other character assessments, too. She doesn’t like to share, according to a former employee: “You didn’t know where you stood with her. You just didn’t know where she was coming from, or where she was going.” Be sure not to steal from the stationary cabinet, either: “One former employee tells of being instructed to phone suppliers of office equipment to haggle over even the smallest bills.” And you’ll have to really work hard at gaining trust: “She had a thing in the back of her mind that everybody, and I mean everybody, was out to do her down, to take a dollar off her. She trusted nobody and assumed the worst of everybody.”

Plus, according to Cadzow’s sources, she’s patriotic and she feels that she doesn’t get the respect she deserves in this country. Batten down the hatches, Fairfax journos. — Jason Whittaker

The Company will shortly make a public announcement about Doug Edwards’ role as CEO – Television becoming redundant. I will be absorbing those duties and responsibilities post a hand over from Doug.

Doug has been a tremendous contributor to the company over his 20 years of service, and in his time as CEO of TV he has provided terrific support to the Board of Directors of PRIME Media Group and great leadership to the television team.

The restructure of the business over the past 18 months has given rise to this change.

There is a myriad of things for Doug and I to work through before he leaves the company, and we will keep you advised in regard to when that is expected to occur. He’ll continue as leader of the television business until we complete that hand over.

Would you please join me in thanking Doug for his achievements with the company, for his great company and sense of humour, and in wishing him the very best for the future.

The Department of Corrections. They say that everything is bigger in Texas. Well, here’s a Texas-style correction in today’s Austin American-Statesman: 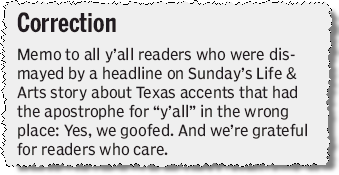 The Age told by court to reveal sources

“The Age has been ordered to reveal its sources for a story that claimed former Labor defence minister Joel Fitzgibbon had accepted $150,000 from Chinese businesswoman Helen Liu, amid revelations the paper was willing to pay $10,000 for documents used in the story.” — The Australian

“I was in the process of hassling some members of Parliament via Twitter and email on a foreign policy issue. On this occasion, one of them actually communicated back – and mentioned my website (this website) isn’t viewable in Parliament House. I decided to find out why.” — Syd Walker

“An e-mail telling Rupert Murdoch’s son James that phone hacking might be ‘rife’ at the News of the World was deleted from his computer less than a week before the police opened their current investigation into phone hacking, lawyers said Wednesday.” — The New York Times

“Prosecutors have subpoenaed the Twitter records of an Occupy Wall Street protester who was arrested in October during a mass protest on the Brooklyn Bridge.” — The Guardian

Thanks for the link to my article about “filtering” of the computer system accessed by Senators & MPS in Parliament House.

Just a minor complaint. The introductory paragraph in Crikey (above) is not an exact quote, but a reconstruction from my original. It weaves together a few sentences from the article but omits text separating some of these sentences in the original. No ellipses are used to indicate the edit. Isn’t that normal journalistic practice?

Anyhow, the result was to make me sound twice as snide as I’d intended – without providing any of the (rather rational) grounds I have for feeling that way.

I don’t “hassle” politicians over foreign policy issues for sport.

I AM incensed by the inexcusable support almost every Federal Parliamentarian (and mainstream journalist) in this land show for policies that seem to me fundamentally at variance with the UN Charter and with basic age-old standards of human decency. This degenerate approach to foreign policy has increasingly entailed “hassling” independent governments that have done us no harm – Libya, Syria and Iran being three recent examples. One is in utter ruins already. The other two are Work In Progress for the murderers our politicians uncritically endorse.

Anyone not clear about my gripe could do worse than check out the fiery interview published today in the New York Times with independent journalist Lizze Phelan. http://video.nytimes.com/video/2012/02/01/world/middleeast/100000001325723/an-interview-with-lizzie-phelan.html?ref=middleeast

I find little in this account of GR’s demands for loyality which could not easily and equally be applied to any number of business worthies of a different gender, including the late Packers (two sterner and more savvy generations), A Bond, R Holmes A’Court, the latter in particular having a major grip on almost anything anyone did in ideas in WA in his time.

Further back, I recall the wonderment of others in the months I worked for the Sydney Daily Telegraph in the early 1960s that, unlike most staff, I had not been sacked by Sir Frank Packer. The answer lay partly in my non-entity status but also, most importantly, the fact I had never shared a lift with Sir Frank, the most common ground for dismissal in those times, when the greatest safety net was the possibility that he did not know your name.

So let’s try to filter out some of the critique to the extent that there seems a hidden gender expectation that GR should be other than she is, warm and cuddly.

GR will surely do better than did James Fairfax, regarding whom the old joke of 30 years ago was:
Q: “How do you make a small business in Australia?”
A: “Give a large business to James Fairfax.”

If you look at some of the intellectual power of media owners in more recent times, for example the 9 decision to give its management to a quiz master, the hurdle is not set high for media ownership wisdom.

Never fear, the market and the shareholders will solve all problems anyway, won’t they 🙂

Of course they will, provided they’ve competition?