Why didn’t PM use the back door? Reports of the showdown at The Lobby Restaurant last week talked of the venue being surrounded on three sides by glass windows. That’s not entirely correct, a Crikey operative notes, and the detail raises an interesting question: “I have worked at The Lobby and can confirm that it has a […]

Why didn’t PM use the back door? Reports of the showdown at The Lobby Restaurant last week talked of the venue being surrounded on three sides by glass windows. That’s not entirely correct, a Crikey operative notes, and the detail raises an interesting question:

“I have worked at The Lobby and can confirm that it has a driveway entrance into the kitchen, which was further down the road and away from the protesters. The public are entitled to an explanation from the Prime Minister’s office and/or her security team as to why that entrance was not used instead of placing Julia Gillard, Tony Abbott, protective security officers and members of the public at risk. In particular, is it the case that being under the media spotlight, the Prime Minister wanted to be seen as the rescuer of Tony Abbott rather than someone retreating through the back door? If it is the case, as it seems to be, that Aboriginal protesters were set up and consequently vilified as a result of the events, Australians are entitled to know the extent to which they were the victims of political strategy.”

As for the political strategy, if any, we may never know. But Google Maps certainly confirms the existence of a driveway at the back of the building … 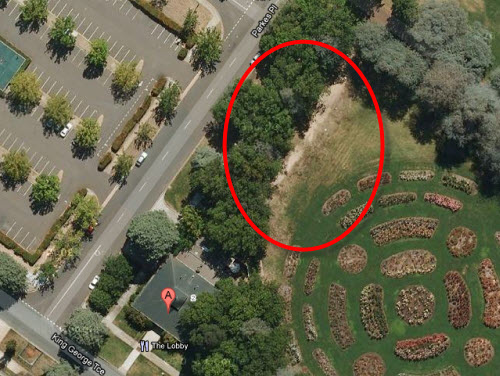 Protesters get their banner back. Remember the protesters at the Santos-sponsored Tour Down Under that had their anti-coal seam gas banner snatched from their grasp by anxious officials (watch the daring raid on YouTube)? Andrew Cooper, from the Lock The Gate Alliance, tells us they got their banner back at least:

“We did get the banner back after threatening legal action against Events SA over the theft of it. There were plenty of police behind us with lock-up wagon, bikes and on foot; they obviously did not expect us to be filming. The violence hurt two 65-year-old females, one’s fingers are still painful. I organised the action for Lock The Gate Alliance at very short notice, with help from the Wilderness Society. We are now planning next year’s actions. We will always be peaceful and not interrupt the event or the public, but with a year to plan we will be bigger and much better.”

Shoebridge must write before spinning. A few raised eyebrows in media circles to see Neil Shoebridge’s byline in The Australian Financial Review today for the 2012 return of its media and marketing pages. Clearly Fairfax will make Shoebridge serve out his time at the paper after he filed his resignation last week for a plum gig as spinner for the Ten Network. There was no hint of a conflict today; there were stories on agency PHD, advertising market predictions, the sale of Hoyts and musings on retail data. But sidestepping stories involving Ten and its rivals might be a future challenge. Wisely a scoop on NineMSN earnings was handled by colleague James Chessell.

More Nine talent at Seven. Meanwhile in TV land, Channel Seven began running promos last night for its latest coup: TV current affairs doyen Mike Willesee will return to the small screen to film stories for Sunday Night. As one TV industry wag noted today: there are more ex-hosts of A Current Affair (two; Willesee and Sunday Night reporter Mike Munro) at Seven than at Nine. Three, if you count freelancer Ray Martin spruiking his book on Sunrise the other day …

Does The Oz not want our money? We want to give money to The Australian to read its copy, really we do. But the sign-up site seemed to be malfunctioning this morning on multiple attempts …