Hugh White is one of the nation’s most listened-to defence strategists. For decades, he’s been helping shape Australia’s foreign policy from all the places that count: media, politics and the public service. These days, the bearded and bespectacled ANU academic is trying to convince world leaders to change their thinking on how they deal with […]

Hugh White is one of the nation’s most listened-to defence strategists. For decades, he’s been helping shape Australia’s foreign policy from all the places that count: media, politics and the public service.

These days, the bearded and bespectacled ANU academic is trying to convince world leaders to change their thinking on how they deal with the giant panda in the room: China’s rise in Asia.

It’s an important discussion, and though people like Greg Sheridan describe White’s ideas as “weird”, “stupid” and “ridiculous”, the ex-ministerial adviser and senior defence official has enough runs on the board for people to take him seriously.

“Hugh is Australia’s most influential defence and strategic analyst and scholar, he has a vast store of experience close to the seats of power to draw on,” former foreign minister Gareth Evans tells The Power Index. “He is responsive to argument, and a very impressive communicator.”

“He’s a deeply thoughtful and publicly courageous commentator,” adds former foreign minister Alexander Downer, who worked with him when he was Defence deputy secretary on the development of strategy around the East Timor crisis in 1999. “I might not always agree with his conclusions but they are based on careful and informed analysis.”

Those who have come across him all acknowledge one thing: White is a provocateur. And though he may look like Ned Flanders on a shaving strike, his ideas are anything but straight-edge. White’s 2010 Quarterly Essay on relations between Australia and its two biggest partners, China and the US, caused rumbles.

“He’s a controversialist with a willingness to stake out a hard position, which he’ll use his skills to defend,” White’s former boss US ambassador Kim Beazley tells The Power Index. “There is not a lot of nuance around Hugh.”

Titled Power Shift, White’s main argument was that Australia would not be served well by having to choose between its two main partners as they compete for primacy in Asia. Australia should foster a “concert of powers”, he said, where the US allows more space for China to grow. It’s a strategy which would have enormous implications for both the ANZUS alliance and Australia’s relationship with China.

“I set out deliberately to write it in a way that it was going to be quite hard to agree with,” White tells The Power Index during an hour-long phone interview, which coincidentally takes place just hours after the death of North Korea dictator Kim Jong-il.

“I wanted to make the message quite stark … I think I succeeded in doing that,” he adds with a laugh.

He certainly did. White’s controversial essay set tongues wagging amongst the diplomacy set, many of whom were quick to counter with criticism. The Australian’s pro-US foreign affairs editor Greg Sheridan was particularly unimpressed, responding with:

“[White] has written the single, stupidest strategic document ever prepared in Australian history by someone who once held a position of some responsibility in our system.”

When the topic of Sheridan’s scathing crit comes up, White chuckles. “I know Greg very well, we go back a long way and I knew that he was going to find what I wrote very distasteful. I knew that he would respond violently, so I wasn’t surprised by that,” he says, before adding that Sheridan’s piece provided his essay with a nice bit of PR.

“He actually did me a favour, a lot of people read Greg’s response to it and said ‘what the f-ck was that all about?’ and went out and bought a copy.”

A year and a half later, they’re still buying copies, or at least talking about whether or not he’s right. White says his measure of success is not how many people agree with his ideas, but how many people respond to them. By that metric, he appears to have had a hit, and not just in academic and media circles either.

Ex-politicians such as Paul Keating and Gareth Evans, as well as current ones like Malcolm Turnbull, have referenced his ideas. And when US president Barack Obama gave a hawkish speech in parliament during his visit to Australia last year, it brought questions about US-China relations front and centre once again.

Though they may not admit it publicly, says White, October’s announcement by Julia Gillard of a White Paper on the “Asian century” shows that the government might be listening as well. 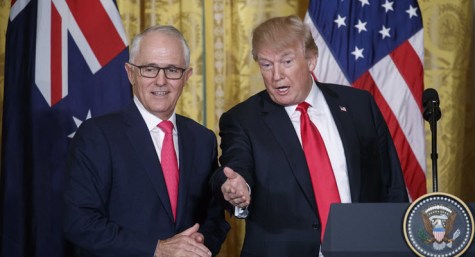