We receive a lot of press releases. Most are useless, but one popped up overnight from Lauren Jones, an Aussie girl who works for gossip site Perez Hilton, which we thought deserved wider attention. But not exactly for the right reasons...

Here at Crikey we receive a lot of press releases from politicians, lobby groups, angry people, etc. Most are useless and immediately deleted, but one popped up overnight from Lauren Jones, an Aussie girl who works for gossip site Perez Hilton, which we thought deserved wider attention.

The subject of this email? “Aussie Lauren Jones rising quickly to the top of the LA Social Media scene.”

Lauren had thoughtfully attached a little intro about herself — she does social media content and edits videos — and asked: “I wondered if you would be interested in doing a story about me for your paper?”

We’d like to take Lauren up on her offer. Not because she’s newsworthy — she’s not — but because it’s an interesting study on how PR can influence what you read both online and in the papers. And how being a shameless self-promoter actually works.

Lauren provided several lines about herself, which presumably any journalist could just pop into a story:

And so on. Lauren also provided a link to where her cousin Dannii Minogue (the less famous one) had blogged about her a few weeks ago calling Lauren a “social networking genius!!!” and noting that Lauren was the reason Dannii had got involved with social media. Dannii writes:

“Lauren moved to Los Angeles in early 2010 and creates around 30 videos for Perez every week. She’s an expert at creating content on the run and totally gets that the audience wants information instantly and with no frills.

“I’m so proud of my cousin, a Melbourne girl making it big in LA and creating social media content viewed by literally millions of people all over the world …

“A big thank you to Lauren for teaching me about blogging and twitter, otherwise I would never have had this connection with you all — this is the woman that made it happen. It took her 6 months of annoying me with tales of ‘Twitter is the next big thing, and you need to learn it’, with a huff and a sigh from me, and a clever and persistent cousin — I made it into the world of social media!”

No word on if Dannii also received a press release/gentle nudge from her cousin to write a promo on her.

Other cousin Kylie employed Lauren to do social media on a tour in 2009 and Lauren helpfully attached some positive quotes from Kylie, including:

“She [Lauren] was ahead of her time with not only the content but the speed of getting it to my audience, who absolutely loved all of it. Her work was outstanding. She is immensely talented, inspired and dedicated to her craft.”

So full marks on getting a celebrity connection. Lauren also pointed us in the direction of a recent feature on her — actually an article she wrote about herself for the Hudson/Houston blog about how she does her job.

For a girl with a job and no apparent real need to promote herself, it’s a top effort by Lauren in attempting to get her name out there. But surely no legitimate newspaper or magazine would actually do a serious profile on Lauren? Oh wait … 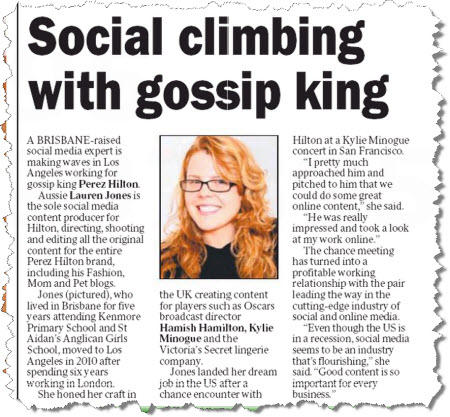 “The chance meeting has turned into a profitable working relationship with the pair leading the way in the cutting-edge industry of social and online media.”

Nice sting in the tail.

I vote Lauren for first ticket on the ‘B’ Ark.

As an expat in LA with onerous visa requirements I’d love to now her trick for getting a work visa in a town not exactly short of video editors.

I just googled Lauren Jones from Perez Hilton. The trick is to have famous cousins like Kylie and Dannii Minogue to help land you jobs!!! This girl’s videos look mediocre at best. And that’s being nice. All she knows how to do is go from Black&white to color, color to black&white. Zoom in, zoom out. And adds some sloppy graphics. My 12 year old cousin could do a better job filming & editing. Please Mr. Hilton, time to hire someone with a film degree who knows what they are doing!

Oh my. If she were a 40 year old male in a suit you’d find her self-promotion “interesting.”