Australia Day turned ugly in Canberra yesterday after comments by Tony Abbott incited Aboriginal Tent Embassy activists to protest at an event attended by Abbott and Julia Gillard, resulting in a dramatic exit of the leaders executed by the PM’s security detail. But the ensuing media coverage has been just as sensational.

Earlier in the day, Abbott was questioned by a journalist on whether the Tent Embassy was still relevant or needed to move on. Abbott replied “I think the indigenous people of Australia can be very proud of the respect in which they are held by every Australian and, yes, I think a lot has changed since then and I think it probably is time to move on from that.”

Abbott and Gillard were attending an Australia Day function just a few hundred metres away from the Tent Embassy when his comments were aired on television. Around 100-200 people (numbers in media reports vary) who’d been celebrating the Tent Embassy’s 40th anniversary headed over to the glass-walled Lobby restaurant to protest Abbott’s comments.

Protesters banged on the glass walls of the restaurant chanting slogans including “shame Abbott shame” and “always was, always will be, Aboriginal land”. After PM security staff deemed the situation a rising threat, a rather dramatic escape of Gillard and Abbott ensued, where the leaders were shepherded out surrounded by riot police and put into a waiting car. Gillard lost her shoe in the process. Activists promised to sell it on eBay to raise money for the tent embassy, but now say they will return it to Gillard.

A look at the nation’s front pages shows some quite dramatic imagery — and some even more dramatic headlines: 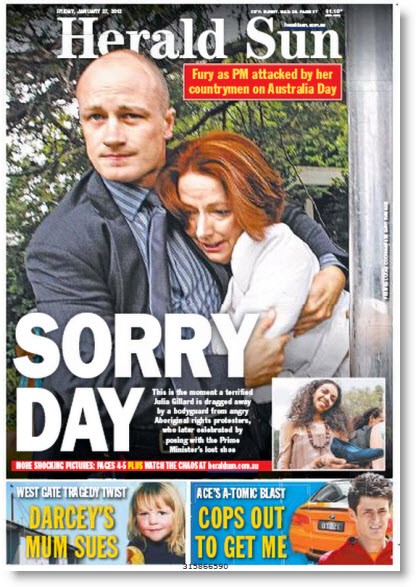 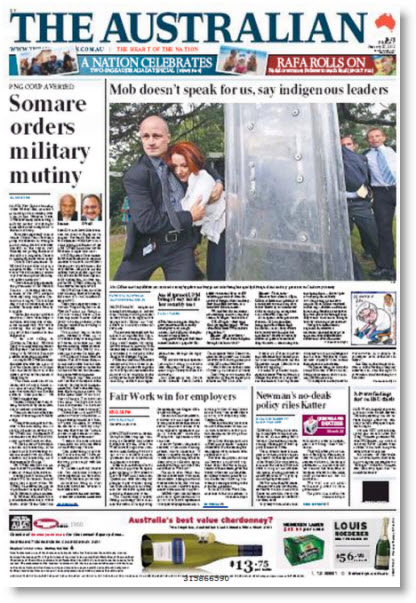 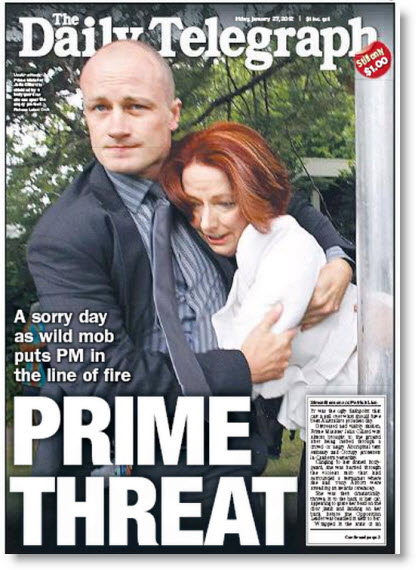 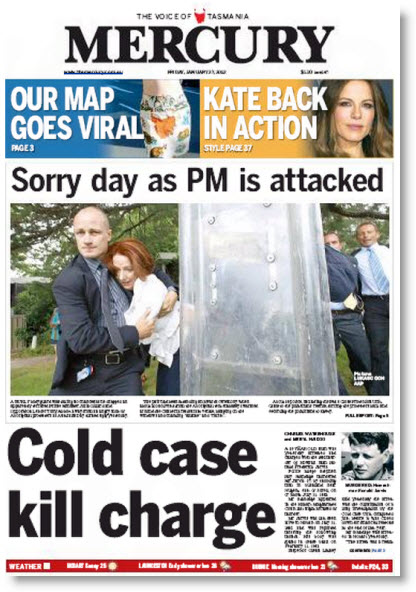 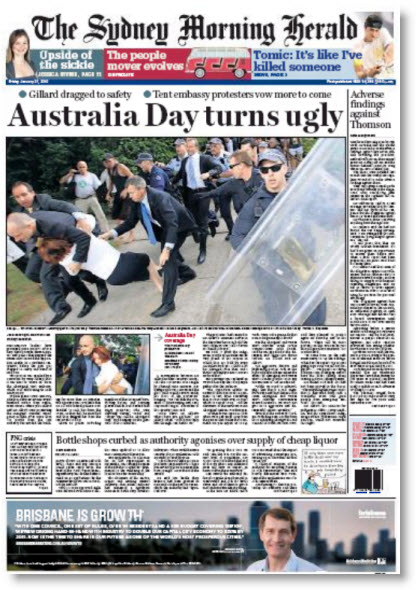 It’s important to note that Gillard tripped over, she wasn’t pushed or attacked by protesters. For a look from another angle — including footage of the security detail warning Gillard of the need to leave The Lobby restaurant and Gillard suggesting Tony Abbott should be escorted out with her — check out this video:

A number of articles have appeared today questioning the legitimacy of the Tent Embassy in light of the protest. This behaviour just illustrates the problems with the Aboriginal Tent Embassy, argues David Penberthy at The Punch:

“The Aboriginal Tent Embassy has never engendered any public respect. It has never done anything to bring black and white Australia together. It is sadly fitting then that the 40th anniversary of this illegal assortment of galvo humpies was celebrated with an unprecedented outburst of violence which saw our Prime Minister being dragged along the ground and our Opposition Leader behind a riot shield.”

This is not reconciliation. This is instead a warning that the wrong path has been taken, leading us to deeper divisions, entrenched by laws, and with dissent punished in courts or on the streets. It means each concession, no matter how extreme, is feeding a hunger for yet more.

Chairman of the Northern Basin Aboriginal Nations, Fred Hooper, explained the angry response by indigenous protesters: “The Opposition Leader on national television made a comment to tear down something that we have built over 40 years which is sacred to us. ‘So what do you expect us to do when we’re 200 yards away from the person that makes that comment? Do you expect us to say, ‘Yeah, Tony, we’re gonna do that now, we’re gonna rip it down’?”

Former ALP President and indigenous leader Warren Mundine said that the protestors had overreacted to Abbott’s comments, adding that the Opposition Leader didn’t say anything about shutting down the embassy: “The words were pretty timid…He echoed words, I would have echoed.”

Aboriginal and Torres Strait Islander Social Justice Commissioner Mick Gooda described the protest as “aggressive, divisive and frightening”, while others have stressed that the majority of the Tent Embassy attendees remained at the Embassy site to continue their celebrations.

A reporter at the Green Left Weekly quoted Sam Castro, who is currently at the Tent Embassy:

“When I spoke to Sam she said that the protesters thought the riot police were arranging to form a sort of guard around the Prime Minister and Opposition Leader so that they could come out and talk to the crowd but, as the rest of the media has shown, the riot police’s real objective was to ‘escort’ the Prime Minister and Opposition Leader to their cars.

“As more protesters made their way to the restaurant, the riot police charged out the doors, practically dragging Ms Gillard along, while the onlookers began to shout “where are you going?” and “why won’t you talk to us?” As the cars drove off, some people threw plastic water bottles and water at the cars.”

The Fin Review reports that co-chairman of Reconciliation Australia Tom Calma said that while he supported the right to protest, it was unacceptable that the Prime Minister had been placed at physical risk and would be disappointing if the actions of a few could be interpreted as reflecting the views of Aboriginal people.

However, he didn’t let Tony Abbott off the hook either — “The other disappointment is that on a day of celebration the Opposition Leader passes a comment about the tent embassy at a time when the embassy is celebrating 40 years of peaceful protest, by and large…This could be interpreted, in an emotional situation, as inciting that sort of behaviour.”

Cox: how about asking Tent Embassy why they’re so angry?

I must say as no fan of Abbott’s that I don’t find anything particularly wrong with his comments, things have come a long way in the last 40 years and the purpose of the embassy should be reviewed, even if it is just making it more relevant to the issues of the day.

I also think it is interesting to here the talkback hosts being disgusted in the lack of respect for the office considering it is they who have fostered this lack of respect in the last fews years (combined with Abbott’s “attack dog” style). I thnk we sould examine whether this has created an atmosphere more conducive to this sort of action?

From a purely political viewpoint this is probably quite good for Gillard, gives her a bit of a circuit breaker from the Pokies issue, makes people a bit more sympathetic towards her, might encourage more “respect for the office”, get’s people to question Abbott’s “fitness to lead” (although in this case it is unfounded) and she get’s points for her “and what about Mr Abbott” comment.

Just heard journo Tony Wright on the ABC saying that he and his wife own the restaurant in question. He wondered why they weren’t ushered out the rear exit via the kitchen.

Good question. I suppose they wasn’t any cameras round the back though…..

Ah, the Coalition’s Midas touch. Even when they don’t say anything they somehow manage to say something.

If Abbott can turn back boats all by himself, surely dealing with a few protesters would be a stroll in the park.

Like @Jimmy Harris, I don’t think what Mr Abbott said was particularly bad. Also, unlike some posters in ‘Poll Bludger’, I do not think that Mr Abbott was dog whistling when he said it. However, I can understand why many would object to Mr Abbott’s comments.

It is indeed regrettable that some protesters allowed their anger to overcome their judgement, resulting in the disruption of an Australia Day event to honour the Emergency Services and causing real concerns for the safety of both the Prime Minister and the Leader of the Opposition. Protesters who broke the law, if they can be identified, should be held to account.

Be that as it may, however, I hope this does NOT mean it’s time for the tabloid press and commercial talk radio to rage against what they would call the ‘Aboriginal Industry’. A forlorn hope, I suppose. I also hope that the Coalition and its media cheer squad don’t reach for the dog whistle.