Jobs to go in Vodafone restructure. The corporate “restructures” are continue apace. Cost pressures at Vodafone have seen the CEO flag coming redundancies to staff this morning. Vodafone Hutchison Australia CEO Nigel Dews dispatched an email to staff — which we obtained soon after — detailing a restructure of the sales and marketing units at the company, with […]

Jobs to go in Vodafone restructure. The corporate “restructures” are continue apace. Cost pressures at Vodafone have seen the CEO flag coming redundancies to staff this morning. Vodafone Hutchison Australia CEO Nigel Dews dispatched an email to staff — which we obtained soon after — detailing a restructure of the sales and marketing units at the company, with “flow-on effects” to include redundancies across the business.

Dews told staff the company was “short of our revenue growth aspirations” despite “strong” December sales. “The opportunity to further strengthen our position in this highly competitive market is still great, it’s just going to take a bit longer than we originally planned,” he wrote. “This means we have settled on a revised budget for 2012 that reflects the fact that although we are growing again, we need to make some changes.”

The sales and marketing groups will be combined into a single organisation from February 9, reporting to one director in Noel Hamill. Current marketing chief John Casey will be moved on (“I am working with him to explore other opportunities to keep his expertise in our business”), while Tanya Bowes’ role as communications director will be subsumed into the new unit (“I are currently exploring other opportunities for her in the business”). Both are said to be highly-regarded and staff are apparently shocked at the axing. The wider restructure of general managers and heads of department will be finalised over the next couple of week.

“There will be flow-on effects from these changes throughout most functions across the company — which will include redundancies and changes in roles,” Dews wrote. “The result will be an organisation which helps us to be more responsive to customers and  is more cost effective, nimbler, and simpler to work in.” Both partners in the business — Hutchison Telecoms (which managed the Three brand) and Vodafone Group — have issued cautious guidance, with Hutchison reporting in August a $78.2 million loss for the first half of 2011.

Fight over the Financial Review fence. We hear there’s tension over at Fairfax between two defectors from The Australian: Australian Financial Review chief Brett Clegg and new editor Michael Stutchbury. It seems Clegg is of the opinion that editors should be more co-operative in talking to advertisers, but Stutchbury is uncomfortable about the prospect. The battle of church and state continues …

Blood on the floor at Fox Sports? There’s reports filtering out of the Pyrmont HQ of cable sports giant Fox Sports of sackings and major changes since new channels director Gary Burns took over earlier this month. The changes are being driven by CEO Patrick Delaney, who used to be 2IC to Kim Williams at Foxtel and was given a brief to refresh and rework the network of channels. That’s the bread and butter of Premier Media Group, half-owned by News Limited and James Packer’s Consolidated Media.

Fox Sports is being revamped from top to bottom, we’re told. Fox Sports News will be rebranded and a fresh look designed for the new AFL channel to launch ahead of the football season will be the benchmark for the three main channels. Stay tuned, as they say.

Green and gold fever at News. Still at News, Williams has issued his latest directive as CEO to the Holt Street troops — wear board shorts and thongs to work. At least tomorrow, when the office celebrates being an Aussie with a morning tea and “special day of events” … 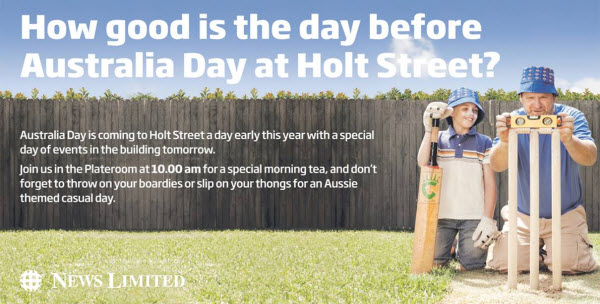 Garrett on why pokie reform is important. Not all NSW MPs, as Craig Thomson asserted in a very public way yesterday, necessarily support the government’s backflip on poker machine reform. After all, Kingsford Smith MP (and cabinet member) Peter Garrett was stuffing this flier in letterboxes — still available on his website — before Christmas last year … FINAL HOURS: Save up to 50% on a year of Crikey

Subscribe before midnight tonight and choose what you pay for a year of Crikey.