For almost a decade, Sydney-based insurer QBE has a market darling.

Beware of market darlings. Very rarely does a business deliver consistently above-average, risk-adjusted returns to investors. For every Berkshire Hathaway, there are hundreds of Allcos. For every General Electric, there are many more HIHs — over-promising, risky entities that deliver short-term gains only to destroy shareholder value over the long term.

For almost a decade, Sydney-based insurer QBE has been a market darling. Led by Frank O’Halloran, QBE’s share price rose from a September 11 low of only $5.50 to more than $35 in 2007 (as well as a couple of dollars per share worth of dividends). QBE has undertaken a spate of acquisitions, all while convincing investors that it’s a conservatively managed company.

But all good things must come to an end. And end they have. Last week, after announcing a surge in catastrophe claims and slumping profit (by 40-50%), investors sold down QBE to $9.88 per share on Thursday, before recovering to $11.

That means in the past four years, QBE shareholders have seen the value of their holding drop by 70%. According to the CEO, the share price calamity was funnily enough caused by a run of calamities. O’Halloran stated that “while catastrophes in the second half of 2011 have attracted few headlines than those earlier in the year, the frequency of events continued at an unprecedented level. In the United States, this included hurricane Irene and further tornadoes, wildfires, hail, fire, wind and snow storms. In other parts of the world, catastrophe claims included bushfires in Western Australia, storms in Melbourne, floods and riots in Europe and extreme floods in Thailand.”

O’Halloran conveniently chose not to focus on “unrealised losses on the group’s fixed-interest investment portfolio as a consequence of rising credit spreads” — presumably, because fault can’t be shifted from management to God for that one.

Between 2007 and 2011, QBE has increased shareholder’s funds from $7.4 billion to $10.3 billion while net profit has slumped from $1.6 billion to only $1.2 billion (and will fall further). This indicates a business that is using more capital to deliver lower earnings. As a result, return on equity has slumped from 21% to about 12%. (Those 2010-11 results were also helped by a foreign exchange gain of $141 million).

Aside from the worsening returns on equity, another concerning aspect of QBE hasn’t even been reflected yet in its financial performance — that is, the group’s exposure to the Australian residential property market, by virtue of its ownership of QBE LMI — one of Australia’s largest mortgage insurers.Mortgage insurance has played a low profile, yet critical role in the inflation of Australia’s property bubble. Mortgage insurance has been so crucial to the bubble because in almost all cases, banks won’t lend to borrowers who wish to borrow more than 80% of the purchase price paid (that is, banks won’t lend on a “loan to valuation ratio” of more than 80%). The reason for this is obvious — if a bank lends 100% of the purchase price, and the purchaser is unable to make payments, it is highly likely that the bank will be forced to sell the property for less than the value of the loan, and will end up losing money.

What banks do to overcome this pesky issue is allow borrowing on LVRs of more than 80% if the borrower gets mortgage insurance from a mortgage insurer such as QBE LMI. What that basically means is that QBE (subject to reinsurance provisions it has undertaken), will be the first casualty of any collapse in Australian property prices. (QBE also values the “goodwill” of LMI, that is, the amount it paid for QBE over and above the businesses actual assets, to be almost $800 million).

QBE noted in its 2011 annual report that excellent results from its mortgage insurance division “reflected the underlying strength of the economy and stable conditions in the housing market”. Of course, since making that statement, house prices have fallen in most Australian locations, while the number of Australians who owe more than the value of their mortgage has hit record levels.

Despite these rapidly deteriorating fundamentals, a report released by QBE LMI in October 2011 boasted of an optimistic outlook for the Australian housing market, forecasting solid price gains in every Australian capital.

It is not without irony that QBE’s 2011 annual report noted former founder John Burns (of Burns Philp), who observed that “while it is easy to tell a boom after it has broken, it is not easy to tell one while it’s still sound”.

While not a huge part of QBI’s business, mortgage insurance is a substantial part of the company’s Australian operations — in 2010, mortgage insurance represented 9.2% of the group’s gross earned premium, up from 23% from the previous year. So while Australians were furiously levering up to purchase over-priced property, QBE’s mortgage insurer was going along for the very risky ride.

QBE provides virtually no other indication of the risks attached to its mortgage business — nor the amount of the mortgage insurance provided, nor the level of reinsurance of that risk. (The company noted that an S&P report on QBE LMI could be found on the company’s website, although it appears no one bothered to upload it). Hedge funds desperately searching for ways to “short” the Australian housing bubble are believed to be taking short positions in QBE.

Fortunately for the executive suite, QBE’s substandard performance doesn’t appear to have affected the remuneration of its management team. O’Halloran, a 34 year-QBE veteran, was paid more than $5.2 million last year, most of it in cash. O’Halloran even received a $1.02 million cash bonus payment, despite QBE’s dwindling shareholder returns. According to QBE’s annual report, O’Halloran’s cash bonus was based on “annual ROE targets and investment income targets” — so one shudders to think what kind of bonus he would receive if the company improved returns, rather than destroyed them.

US mortgage insurer pulls the pin on Aussie float 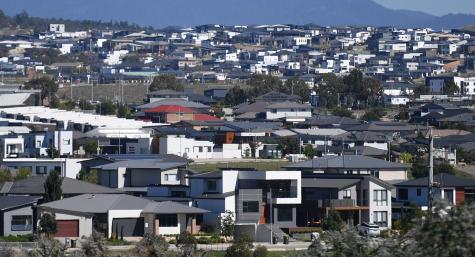