Unions: put your money where your mouths are on cars

There's a great way for unions to directly support the automotive sector themselves. Wonder why they're not using it, ask Glenn Dyer and Bernard Keane?

Here’s a novel idea for the government and the car industry unions: why not get some of the hundreds of millions of dollars needed to support the industry from the industry super fund sector?

That’s the more than 40 funds, large and small, that manage a vast chunk of the more than a trillion dollars of assets on behalf of their mostly union members.

It’s an alternative to the raiding of the public purse by car companies and their employees that will see the government shell out millions of dollars in assistance and now the opposition moving to change its mind on cutting half a billion dollars from current industry support plans.

The Rudd government originally promised $6.2 billion over 10 years in its 2008 New Car Plan, but that was cut by $500 million last year by the Gillard government. Around $3.4 billion still remains to be allocated. The latest round of funding for Ford comes from the New Car Plan. Funding for Holden will most likely be from the same source, but this remains unclear.

In 2008, the Productivity Commission calculated that total assistance, via the budget and remaining tariffs, equalled $23,500 for each automotive industry worker per year. Tariffs have since fallen, reducing the amount, although new funding like the curtailed Green Car program partially offset the reduction.

It’d be more efficient to offer $20,000 to an automotive worker to cover the costs of relocating to WA or Queensland, where they could work in the mining industry. There, they’d get twice their current wage.

The real beneficiaries of the subsidy, of course, are the multinational car companies, which are expert at bleeding governments the world over of funds, exploiting the widespread belief that a car industry is some sort of badge of economic achievement.

So why aren’t industry super funds stumping up money to help their members retain employment, while getting a return on their investment?

The industry sector ranges from the huge AustralianSuper, which is the largest single fund in the country with an estimated $38 billion under management, to smaller funds managing $1-2 billion. Collectively, it’s estimated these funds control more than $200 billion of the country’s $1.3 trillion of managed funds.

According to the Rainmaker group, six of the country’s top 10 funds were industry-based as at September 2011. The six managed more than $150 billion in assets as at last September. 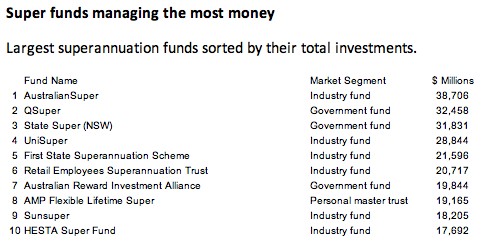 Sixteen of the 45 industry funds own a company called Industry Funds Management (IFM), which manages about $30 billion of assets on behalf of its owners. The owners include Australian Super, MTAA Super and CBUS. So the industry has substantial assets, cash flows and the ability to make large scale investments.

So why don’t unions start encouraging industry funds to invest in the car industry, instead of demanding more support from the federal and state governments? Yes, there’s the usual investment criteria about making profitable and financial sensible investments. But after all, given their recent superannuation performance, you’d be right in asking if the funds could have done worse in automotive manufacturing.

Fortunately for them, industry funds aren’t encumbered with the fees and commissions that significantly reduce the returns of the big bank-dominated retail funds. But like their privately-run peers, industry funds have been doing it tough in the past couple of years as sharemarkets here and offshore have slumped and failed to recover. Property — which industry funds have focused on much more than retail funds — hasn’t shone. Only fixed interest has done well, and all Australian funds (private or industry) have been caught short in this asset class because it has traditionally formed only a small share of the funds’ overall investments. Australian funds traditionally have more exposure to shares (local and international) than fixed interest, unlike super funds in Europe.

Oddly enough though, compared to the massive losses since 2007 on their share investments, any loss from supporting the car plan would be minimal in comparison. And the investment could be justified on helping maintain employment, manufacturing and skills … all the reasons why the unions and their supporters urge the federal government to support the car industry.

It might also be that industry funds have become gun shy about making what might be termed “left of field” investments. Look at one fund in particular, MTAA Super. It has lost well over a billion in the past couple of years on investments in what are called “illiquid products” such as derivatives. It had investments in infrastructure and property, some of which have been put up for sale. Some would point to MTAA Super’s experience as why industry funds should not get involved in something like supporting the car industry. But MTAA Super’s experience was also due more to problems with the derivatives, judging by media reports, not the quality of the assets.

And besides, if the industry funds don’t want to get involved directly in the car industry itself there are other ways of putting their money where their mouths are.

For example, they could treat it as a form of infrastructure investment and buy the car plants and land of Ford, Toyota and GM. Even if the car companies stop manufacturing, the car plants and their land will have a significant residual value. And the land could quite easily be converted to light commercial/residential/commercial and sold off. Holden’s vast former plant at Pagewood in Sydney, for example, shut down in the early ’80s, was bought and is still operated by British American Tobacco. If super funds can buy into (directly or indirectly) renewable energy, or buy into poorly performing toll roads, airports, etc, why not manufacturing?

Super funds might even be more successful at driving the establishment of a viable car industry — if such a thing can ever exist in Australia — than Canberra bureaucrats.

Even if losses are taken, the industry funds and the unions should be able to justify the red ink to the mostly union membership of the funds as “protecting jobs”. It couldn’t be worse than enriching those in the money management sector and other leeches sucking on super for losing hundreds of millions of dollars in buying shares.

Is our super pool a dead weight on the economy?

Well articulated – an obvious solution to a couple of significant elephants in the room.

The conflation of ‘unions’ with ‘industry funds’ is wrong. They are seperate organisations and the boards of super funds don’t take orders from the secretaries of unions.

Why would you suggest industry super funds invest in a lemon? What if they call your bluff and actually do it?

Wow, you guys have written some really dumb things over the years, but this takes the cake. There are just so many reasons why this should not and happily will not happen.