Rundle12: no place for a Huntsman in either the woods or a diner

We were all in the Puritan diner and ice-cream store when Jon Huntsman lunged towards me.

We were all in the Puritan diner and ice-cream store when Jon Huntsman lunged towards me. The tiny roadside store was swarmed with reporters, TV crews, folks trying to buy ice-cream and even the occasional Huntsman supporter, and I was standing beside a short high cheek-boned blonde d’un certain age who was ordering a huge tub of roast duck meat. Huntsman, slim, youthful-looking and casual, was trying to get over to us, through the scrum. What had I done? Did he have something to say to the Australian people? “Dude, that’s the candidate’s wife,” someone said behind me, and we all scarpered.

It was a photo op stop after all, and Huntsman was desperate to be as close as possible — to the duck, which was being taken back to Huntsman headquarters a few blocks down the road for hungry volunteers. Huntsman had to be seen delivering it to his hungry troops. Hell, he’d already lost half-a-dozen potential votes by getting in the way of people after cookie dough and pecan-nut crunch. He swept past us, grabbed the box of duck, posed for a few photos with his wife, and swept on out. His smile was forced, and he gripped the box tightly, pushing through the whole rigmarole without much pleasure.

Out in the car park, he appeared angrier still, trying to get to the SUV. Camera crews swept around him; supporters didn’t. Some lunatic in a beret was intoning “I need a Huntsman badge, does anyone have a Huntsman badge?” over and over again (“You seem to be the only vocal Huntsman supporter here?” / “Actually, I’m a collector of political memorabilia”), as Huntsman finally made the car with barely concealed relief. He looked less like a candidate on the razzle, than a divorced dad on an access weekend Maccas run. 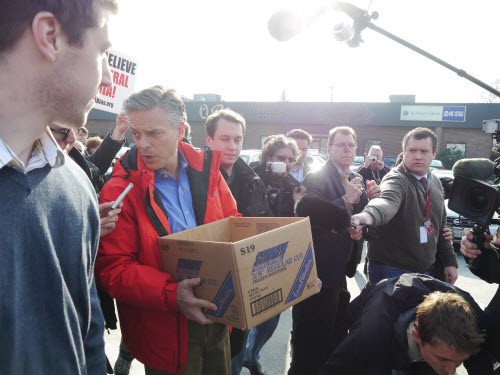 The staff-food run is ridiculous, but it’s one of the most hackneyed and hallowed routines of primary campaigns, allowing the candidate not only to appear as a man of the people, but also to appear in yet another diner, without that awkward, hanging around, can-I-pass-you-the-ketchup sort of appearance. The very absurdity of it makes it a test of political intent — you not only have to do it, you have to love it, and Huntsman, a former Utah governor, and most recently ambassador to China, couldn’t get to that.

Nor is it the only time in which he’s been lacking oomph. He was lacklustre in both debates held over the weekend, and his “town halls” don’t have the revivalist enthusiasm that any marginal candidate requires — although the most recent one was held in Keene, New Hampshire, a town dominated by “free stater” ultra-libertarians who want to legalise everything including incest and consensual cannibalism, so y’know.

Huntsman’s incessant pitch is that the country “is not only suffering an economic deficit, but a trust deficit” and that he’s the one to solve it; that America needs people bringing solutions, not more problems, and that he’s got them; and last but not least that he’s the only candidate for the Republican nomination who believes in evolution and climate change, and that that ought to count for something. The audiences nod, murmur their agreement, and then stream out into the night, as if they had just attended acceptable amateur theatre.

Huntsman was hoping that socially moderate New Hampshire would warm to his message of taking back the party, and launch him — from a polling base of around 5% — into second place beneath Romney, who is currently hovering around 40%. So far it hasn’t happened. He’s managed to bump himself into the low teens, but he’s still running a few points behind Ron Paul, who’s hitting between 17-19%.

By definition, of course, it’s difficult to get people passionate about being moderate. Huntsman speaks of rolling back Obama’s health-care plan rather than abolishing it, of limiting the power of the EPA rather than abolishing it, of withdrawal from Afghanistan, and of breaking up the bailed-out investment banks, so that they are no longer “too big to fail”. He talks a reasonable amount of guff about America’s “world leadership role”, but refrains from the narcissistic exeptionalism which have become a drug for the other candidates and their supporters.

Well and good, and slowly gaining supporters, but Huntsman will not do what needs to be done in carving out a space — what Ron Paul has done, and launch a full-scale insurgency against the other candidates and his own party. For Huntsman to get a real bump in his figures he would have to launch a demolition of Romney, and carve off a section of his voters. That would necessitate attacking Romney’s right flank, chiefly his commitment to a continued war in Afghanistan, his half-way bets on global warming, his hardline anti-abortion stand, and his equivocal answers about what is surely the maddest suggestion to have recently emerged — the idea that US troops might re-occupy Iraq, a notion which was enthusiastically supported by Rick Santorum and Rick Perry during the weekend debates.

Huntsman could take a slice of Romney if he was willing to attack him for pandering to the now flagrant irrationalism of the Republican Right. Such an attack would have a chance at pushing him close to second place, and if successful, do it at Romney’s expense, evening up the race.

But of course he would not do this, for this would finish whatever chance he has of taking the nomination — virtually none in 2012, but more plausible in ’16 or ’20 (he is 52 years old). So Huntsman keeps his attacks at the more general level. His best blow against Romney occurred during a weekend debate, when “Mittens” Romney slated him for serving under Obama.

“I served my country while you were campaigning,” Huntsman shot back, “just as two of my sons serving in the Navy now are. They don’t ask who the commander-in-chief is.”

Romney shot back by saying that, “you don’t serve the country by working for Obama, but by working for conservative politics,” to which Huntsman replied — with, it seemed, genuine disgust — “that’s what divides this country”, a remark which got the loudest and most spontaneous cheer to date.

He could do with more of that, but I can’t see it coming. You don’t have to see very much of Huntsman to suspect there’s something missing there. Huntsman has a solid record of achievement — ambassador to Singapore at 32, governor of Utah (which he ran pretty much as, say, any moderate German social democrat might run a regional state) ambassador to China — but it has all been done in the shadow of great wealth and heritage.

His father is a billionaire, having made his fortune in chemicals developing, among other things, the polystyrene cartons once used by McDonalds, and hence, the Pacific trash gyre. A Mormon family descended from the founders, Huntsman senior served on the “fifth council of the seventy” (don’t ask), and ran for Utah governor in 1988. Jon himself did his two years Mormon missionary service after dropping out of high school, and playing in a REO Speedwagon covers band (“Wizard”) for a few years.So, apart from that youthful outbreak, he’s played it straight down the line, including a stint as CEO of the family company, and the reprise of his father’s failed gubernatorial bid. Whatever his billionaire dad is like, I bet he doesn’t have the soft-spoken, near reticent manner of the son, and it is that reticence — the curse of sons and younger brothers, from Huntsman to Miliband — that comes shining through in every appearance.

Far from seizing the day, Huntsman will barely seize the duck, and that stalling is more than merely personal. For Huntsman is running for a party that simply doesn’t exist anymore — the Rockefeller Republicans, the party that obtained from 1936 to the election of Reagan in 1980. Comparatively centre-right, with religious and cultural causes pushed firmly to one side, such a strand barely exists in the party anymore — though New Hampshire is one of the last redoubts. That is the party Huntsman wants to lead, one in which he could slide into nomination and then power, and introduce a centrist agenda, at which task he would be, administratively at least, unquestionably better than Barack Obama.

But among the raucous puffery of “greatest country on earth”, the arguments as to whether states should be able to ban contraception, and Obama’s “socialist plot”, there’s no place for a moderate, and no role for anyone not content to remain an insurgent, to accept that leitmotif of politics, failure. 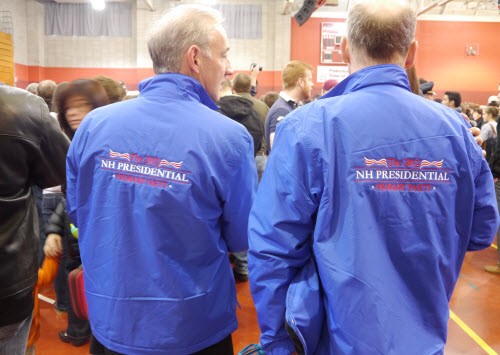 Wearing the colours of the New Hampshire primary

With less than four hours until voting starts in the New Hampshire primary — in the sexily named Northern Woods hamlets of Hart’s Location and Dixville Notch — the candidates more willing to do what is required have gone to the wire. Today they all rounded on Romney. He gave them a great hostage to fortune (he is worth a mere $200 million) when he noted — of private health insurance — that “I like being able to fire people who provide [poor] services to me”. The phrase was in attack ads near before he’d finished the sentence. Even had he not essayed that, his opponents had been ready to launch into unashamed Right populism, to attack Mitt’s period as a sometime corporate asset stripper with a group named Bain Capital.

Bain saved some companies, gutted others, but made millions every time regardless. Desperate to land a blow or two, candidates came out swinging, with Newt Gingrich remarking that “capitalism can’t be the rich dominating the lives of the poor” — which will be news to capitalism, the rich and the poor. The attacks were howlingly absurd (and check out the Gingrich SuperPAC ad on YouTube, “When Mitt Romney Came To Town“, which could be run by the Socialist Workers Party) and, as commentators noted, will give cover to the Democrats when they go for Romney from the Left — but the very possibility that they could be made from the Right demonstrates the degree of myth-making and fantasy in which the Right, and an unknown segment of the American public, remains sunk.

Many are passionate, many are bewildered, but fewer are moderate and there is no place for a huntsman in the woods.

The chances that Gingrich believes the drivel he spouts against evolution are Zero.
What a creep.

Damn, if he brings me duck, I’ll vote for him. Make mine Peking.

The fact that the only ‘moderate’ in the whole Dad’s Army of Republican candidates is unable to gain more than a few percentage points of approval tells us just how dire politics has become in the United States.

There’s more than a touch of irony in the fact of Romney’s history as a Gordon Gekko of the leveraged buyout when you look at what Wall Street has done to Washington and its putative owners ie the American taxpayers. Now owned lock stock and barrel, the whole deal was done with the mug punter’s dollars (hundreds of billions of them) and Wall Street is busy creaming the profits into huge bonuses and churning the rest into massive arbitrage deals to engorge their bottom lines.

The US government is now owned by Wall Street, thanks to the taxpayer, and what could be more fitting than the Republicans putting forward their very own Gordon Gekko to run it?

You know it makes sense.