Despite much public interest in, and debate around, the major banks' purported "gouging" and taxpayer-guaranteed status, some very fundamental questions remain unanswered, says Christopher Joye on Property Observer.

Despite much public interest in, and debate around, the major banks’ purported “gouging” and taxpayer-guaranteed status, some very fundamental questions remain, rather bizarrely, unanswered.

These include: what exactly is the major banks’ “cost of funds” that they regularly complain about; how has their overall cost of funds changed (ie: has it been rising or falling?); and if the cost of funds is so obviously important to the banks, and a key determinant of what they can and cannot do with mortgage rates, why don’t they simply publish a cost of funds index that tracks any change in it over time?

Yet even a cost of funds index would be inadequate, since it is only one input into the profitability, and overall rates of return, that the major banks target. A more informative benchmark is the major banks’ “net interest margin”, which simply measures the net difference between the interest rates the banks pay on the money they borrow from their funders (eg: depositors like you and me) and the interest rates they receive on their loans to businesses, households, and SMEs.

By looking at the change in the major banks’ net interest margins, one can get an indication of the profitability of their business activities. Realised profits will, however, be influenced by three further factors: (1) the volume of loans that they write or “credit growth”, which has been in structural decline since the GFC; (2) the extra fees and charges they levy on customers, which yield the banks profits above and beyond their net interest margin; and (3) the banks’ fixed and variable operating costs, the most significant of which is the amount they choose to pay their executives. After accounting for these variables and a few other things, one can get close to calculating the major banks’ “return on equity”, which is a measure of their shareholder earnings.

Regular readers will know that I have been critical of major bank remuneration levels for senior executives, and the banks’ proclivity for hiring former regulators (eg: Treasury secretaries and RBA governors), which, I have argued, creates dysfunctional long-term incentives between the public and private spheres. Or, in the words of MIT professor, Simon Johnson, a financial “oligarchy”.

According to CBA’s 2011 Remuneration Report, the average total compensation of the top 15 executives was an incredible $4.5 million (the median was only slightly lower). Excluding CEO Ralph Norris, the average compensation was still $4.2 million. 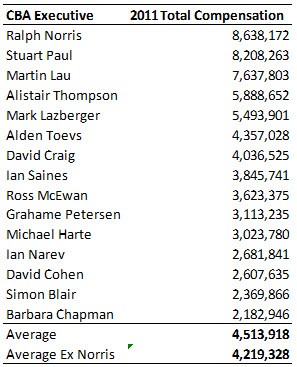 These numbers highlight the absurdity of attacks of the RBA governor’s comparatively paltry $1 million pay, especially given he is responsible for overseeing the entire banking system (in concert with APRA) and, more pointedly, bailing out Australian banks facing funding crises via the RBA’s liquidity facilities. And this all in addition to the RBA’s first-order monetary policy functions.

Reasonable criticisms of major bank pay can also be made on the basis that they are effectively quasi-public (ie: non-private) institutions that implicitly and explicitly rely very heavily on taxpayer subsidies in the form of free taxpayer guarantees of bank deposits, subsidised taxpayer guarantees of bank debts, and the RBA’s many and varied forms of low-cost liquidity support. Ask yourself: what other private companies get the benefit of all this taxpayer largesse? 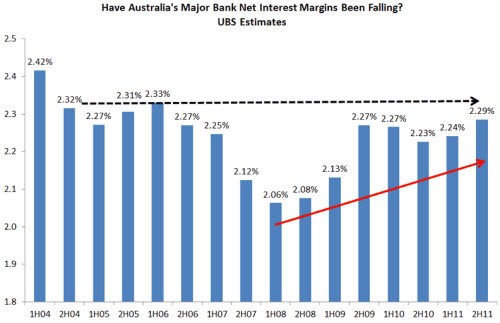 We can draw two insights from this analysis. The first is that the major banks’ net interest margins have been steadily increasing since the low of 2.06% reached during the first half of 2008. The second is that notwithstanding the banks’ much higher cost of funds and the introduction of a raft of taxpayer support schemes, the margins they are earning today are as good as they have been since the second half of 2004.

As noted above, net interest margins are only one part of the banks’ complex profitability picture. Several years ago I censured the RBA for focussing on this proxy to the neglect of more complete benchmarks, such as return on equity (RoE). The RBA now regularly reports and parses bank RoEs in its bi-annual Financial Stability Review.

So how has bank profitability varied over time? And has there been a decline in bank returns post-GFC in recognition of their lower risks as a function of (1) higher internal capital requirements (ie: less leverage) and (2) the fact that as explicitly taxpayer-backed institutions there is demonstrably less of a need to produce ultra-high growth in order to raise capital?In my final chart I have depicted UBS’s estimate of the average major bank return on equity (profit-weighted) since 1993. Remarkably, the major banks were able to maintain solid double-digit RoEs during the global credit crisis experienced in 2007-09 (and since). Today, the average RoE remains a still very high 17%, and, abstracting away from some circa 20% spikes, is not materially different to the levels observed in the 10 to 15 years before the GFC. Indeed, this crisis was evidently a good one for Australian banks, since they were able to keep their returns way above the lows observed during the 1991 recession. 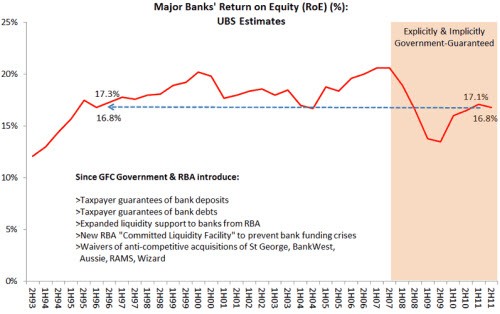 We have, therefore, yet to see a structural decline in RoEs commensurate with the much lower risk profile of these utilities. And there can be little debate about the latter claim. The world’s largest rating agency, Standard & Poor’s, concluded in a review of the banks in December that their credit rating is two notches higher, and hence their cost of funds lower, because of the assumption that they are government guaranteed. Specifically, S&P remarked:

“Our counterparty credit rating on Commonwealth Bank is two notches higher than the [stand-alone credit rating], reflecting our view of a high likelihood of extraordinary government support in a crisis.”

A closing thought is that the major banks have ample room to absorb higher funding costs. That is, they should be prepared to deliver shareholders lower returns, and operate on the basis of somewhat thinner net interest margins, given the advent of public guarantees of their livelihood and solvency has unambiguously improved shareholders’ risk-return trade-off.

*Christopher Joye is a leading financial economist and a director of Rismark International and Yellow Brick Road Funds Management. This article — first published on Property Observer — does not constitute investment advice.

The CEO’s of the banks should be remunerated in line with public sector agencies. Of course, this is just part of the story of how banking lives in an entirely different universe from every other business or public agency.

Given that they are largely immune to anything but the most egregious of errors, and seem to have the capacity to maintain the same level of profits regardless of terrible decisions (Homeside just one of many) they are in fact quasi-public institutions.

Further, the fact that they are so important to the economy, as they relentlessly tell us as an explanation for why they have to continue to gouge customers mercilessly, they should in fact be run as quasi-public institutions.

While there is a strong argument for them to not be run by government, there should be amiddle ground where their oversight by parliament is far in excess of any other type of business, and constrained accordingly.

The obvious first move is the separation of the ‘boring’ basic bank services, which are essential to the economy and ‘too important to fail’, from the merchant/commercial banking arms. At least that way the government could provide explicit guarantees to the boring banking while letting the more risky sides of banking fail if they fark up.

But that chance went by a few years ago, and with a Labor govt Treasurer. What hope salvation now?

It is good that our banks are strong and profitable but they do get away (metaphorically) with murder. I think the kay here is a lack of real competitive pressure – partly a result of customer inertia. We should be willing to shop around more.

Why deal with banks at all. Credit Unions and Building Societies are doing a terrific job. I am utterly satisfied with my Credit Union’s performance.