In today's Media Briefs: a night out with National Review, the first 2012 media killing, how people watch TV online and off, tagging 101 for newsrooms and more...

Front page of the day. The New Hampshire primary is on Tuesday and the New Hampshire city of Manchester held the Republican presidential candidate debate over the weekend. Here’s how Union Leader covered the primary race in its edition today: 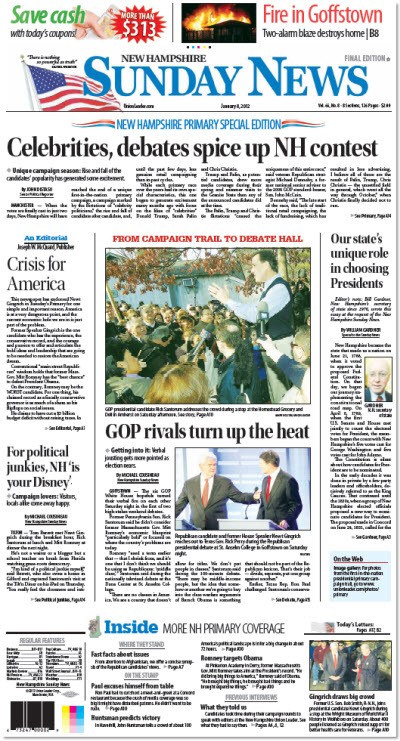 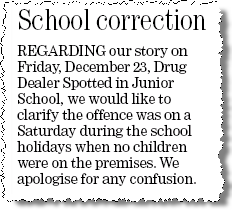 Next, the January 7 edition of the Washington Post carried a correction that strikes a victory for vegetarians everywhere: 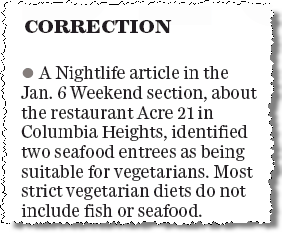 Finally, the January 7 edition of Canada’s National Post apologised for mistaking an Airbus for a Boeing, which is kind of like mistaking a Pepsi for a Coke (or vice versa) for those in the aviation game …

A night out with National Review

“Last night, finding myself unable to get tickets to the monster truck rally in the downtown Verizon Wireless Arena, I did the next best thing and attended a National Review-sponsored debate party in the Grand Ballroom of the Manchester Radisson.” — Columbia Journalism Review

“Overseas media support groups have challenged the Aquino government to follow through on the investigation of yet another journalist’s killing, as outrage continues over the murder of General Santos City publisher and broadcaster Christopher Guarin.” — GMA News

In a fledgling country, perils for the press

“Making a newspaper anywhere these days is not easy; making a daily newspaper in South Sudan can seem nearly impossible.” — The New York Times

How people watch TV online and off

“In a report put out yesterday on the State of the Media summarizing 2011 data, Nielsen estimates Americans spend an average of 32 hours and 47 minutes a week watching traditional TV.” — Tech Crunch

“If your newsroom has a blogging platform or a content management system that allows you to assign keywords, doing it right and consistently can lead to really interesting ways of sorting, filtering and displaying content.” — 10,000 Words