After directing a hardboiled gangster pic (The Departed), a grisly hallucinogenic thriller (Shutter Island), an episode of prohibition-set drama Boardwalk Empire and two music documentaries, Martin Scorsese splashes colour instead of blood or guitar riffs across the screen in Hugo, an eye moistening family crowd pleaser that marks the first time the veteran 70-year-old director […]

After directing a hardboiled gangster pic (The Departed), a grisly hallucinogenic thriller (Shutter Island), an episode of prohibition-set drama Boardwalk Empire and two music documentaries, Martin Scorsese splashes colour instead of blood or guitar riffs across the screen in Hugo, an eye moistening family crowd pleaser that marks the first time the veteran 70-year-old director has dabbled with 3D technology.

The results — a gorgeously rendered rainbow of aesthetic and thematic pleasures — is Scorsese’s Cinema Paradiso (1988), a love letter to the medium inked with the energy of an old hand still giddy with possibilities after more than half a century in the biz.

The eponymous character is a poor young boy (Asa Butterfield) who lives in the roof of a train station where he works winding a gigantic clock. His drunkard uncle has recently passed away and Hugo steals to stay alive, also pilfering motor parts to rebuild an old robot in the hope it will unveil a secret message.

He must evade the clutches of a clumsy but nefarious station railway inspector (Sacha Baron Cohen), who hobbles around with an angry dog and a bung left leg, routinely throwing young’uns in a cage and calling in the orphanage. Hugo meets young bright-eyed Isabelle (Chloe Grace Moretz), niece of local toy shop owner Georges Méliès (Ben Kinglsey), and together they unravel the mysteries of Méliès spectacular past.

Adapted from Brian Selznick’s best-selling novel The Invention of Hugo Cabret, the film uses the unlocking of Méliès’s repressed memories to point viewers in the direction of a different history — the cinema; part real, part imagined — in a backstory that underpins a forgotten visionary’s work with a message about the medium’s potential to transport audiences into alternate universes and states of consciousness.

The characters exist in a reality magic has touched, but one not too different from our own. The performances reflect this by balancing earthy charm with a hint of the otherworldly: the starry-eyed wonder of the two kids, the theatrical backstory and grand caricature of Ben Kingsley, the funny, retrograde, comically menacing villainy of Sacha Baron Cohen.

Oblivious to the smug intertextual post-modernism trending in contemporary family cinema, Hugo latches onto the idea of Hollywood as a dream factory, a land sparkling with feats of unbridled imagination. It’s an idea so nostalgic, so passé, that it seems, appropriately enough, the stuff of fairytale.

Scorsese remains at the top of the class of ‘movie brat’ directors (the first generation of formally educated filmmakers) and has seen the best and worst of the industry during his many years filling the frame. He’s snorted more cocaine than a hundred garbage bags could hold, watched countless colleagues rise and fall into fame, obscurity, rehab and fatal pools of vomit; has by his own admissions delved into near-death experiences for the thrill of coming back alive, and played his part in making and breaking careers of an endless conveyer belt of wannabes clawing desperately to be involved in his productions, clutching onto dreams more often failed than realised.

Scorsese knows Hollywood’s dirty underbelly, understands it like he understands how to point a camera — and yet, away from the eating disorders and sinus infections, in another place to the deal table and pay checks, is a sacred spectrum memorialized in Hugo, capturing the purism in film that binds every cinephile: knowledge that, between mind and screen, lies an incalculable distance where reality breaks down and — if only for a moment — anything becomes possible.

Setting the benchmark for 21st century family films — 3D has never looked better and Hugo’s story is universally appealing — Scorsese has tripped the light fantastic, pounding soul and beauty into a heart-tingling mesh veneered like clockwork, around which, in a literal sense, much of the film takes place.

The gears and cogwheels of the station’s giant clock are captured in glorious explorative camera movements by Scorsese, a technical obsessive who uses his tools like Méliès uses his — to whisk audiences to the moon and back. And the moon, a beautiful vignette in Hugo, is an image Scorsese plucks by reaching into history. A fictitious history, but a history nonetheless, one that folds film within film, feats of imagination within feats of imagination, self-reflexive in a cyclical sense: cinema as a circle of mysteries always unbroken but never complete, whirring like a gigantic clock that turns past science into fantasy and back again. 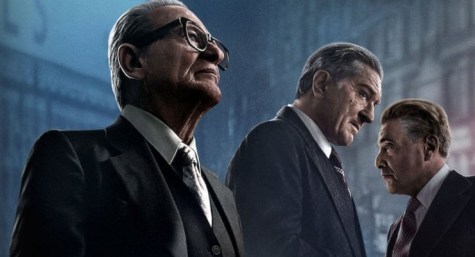 The Irishman, Netflix, and cinema’s long fade to black