The National Housing Supply Council has produced extensive data on the nature of our housing undersupply. And the big problem is in NSW.

The National Housing Supply Council released its 2011 report yesterday and has provided a corrective to the continuing denialism about Australia’s long-term housing undersupply.

The federal government-appointed council, headed by public policy veteran Owen Donald and deputy-chaired by respected economist Saul Eslake, was set up in 2008 and is now onto its third State of Supply report — without, apparently, convincing politicians at federal and state level of the need to addressing housing undersupply.

In what is a rich source of data and analysis on housing in Australia, the council estimates that over the course of 2009-10, the gap between underlying housing demand and supply widened from about 158,000 dwelling units to about 187,000 units. This included a downward revision of estimated gap in 2009 by about 20,000 dwellings. Using “medium” supply and demand scenarios, the council estimates this gap will grow to about 329,000 dwellings by 2015. Longer-term, the gap will widen to over 600,000 dwellings by 2030, based on the same medium scenarios.

But — and this is a critical caveat — the report makes clear that the problem is primarily one in NSW and Queensland. About 40% of the gap is in NSW, well ahead of the 32% of Australians who live in that state,and a third of the gap is in Queensland, despite only 20% of Australians living there. The gap actually narrowed in Victoria, where it’s only 17,000 dwellings anyway, and there’s actually a small oversupply in South Australia. But the gap is also a problem in the Northern Territory and the current gap of 28,000 dwellings in Western Australia will presumably grow significantly when the council reports next year on figures up to June this year.

While NSW and Sydney in particular receives more international migrants than any other Sydney, NSW’s problem isn’t outsized demand, it’s hopelessly inadequate supply. This sums up the problem in NSW — not to mention how badly NSW Labor let the state down from the middle of the last decade. 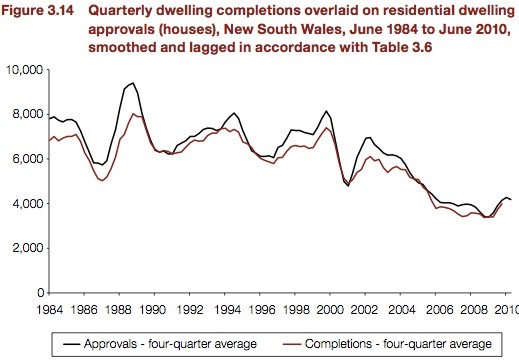 The report also grapples with the dilemma of why the housing market in most larger centres unaffected by the mining boom has been flat or falling, which has been manna from heaven for local housing denialists and doomsayers, as well as their foreign cheerleaders like The Economist, which continues to peddle irrelevant data to argue Australian housing prices are wildly overvalued.

The report devotes several pages to explaining why the housing market remains soft when underlying demand remains strong, arguing that short-term cyclical factors around demand (particularly around affordability, interest rates and the impact of schemes like the first home owners’ boost) and supply may temporarily counter underlying trends. “The housing downturn appears to have been driven by deteriorating sentiment and worsening affordability,” it suggests.

The report also responds to the claims of the likes of The Economist:

“… the council believes that most of these international studies tend to overlook several factors peculiar to the Australian market that distort direct comparisons. Most are based on simple average house price–to-income ratios, which ignore several significant factors that contribute to higher prices in Australia. Cities with more than one million inhabitants tend to have higher house prices relative to income, and Australia has a higher proportion of its population in major cities (particularly Sydney and Melbourne) than the majority of other economies. These studies also do not take into account the balance between supply and demand — the most obvious contrast being with countries such as the US, Ireland and Spain, where significant excess supply is placing downward pressure on prices. These comparisons also make little attempt to account for the different mix of housing stock in Australia compared to elsewhere. Australian homes tend to be larger, on average, than their international counterparts. In addition, several Australian cities rank very highly on international ‘liveability’ comparisons, which are likely to affect the price households are willing to pay to live there.”

Housing undersupply notionally remains on the COAG agenda but has slipped as a priority. Much, then, will depend on the NSW government’s current review of planning laws and the need to end the disastrously sclerotic development approval process in NSW. Our biggest state is the epicentre of a developing housing crisis. Fixing it should be a priority for the O’Farrell government.

This article originally referred to Saul Eslake as “co-chair” of the Council – he is of course deputy chair. Apologies to Saul and to Owen Donald. BK

Can we please put this issue to rest now?

And that means no more articles from Adam Schwab for the frothing masses of housing bears.

Too much immigration, what do you expect, we cannot sustain it and they only want to live in the cities.

After the coming climate crunch has done its work, the rules of the game will change.

Survival in an energy and food poor world will take precedence over small matters like the capital gain to be made on private dwellings, or the pro’s and con’s of McMansions.

Ten years should see significant new constraints on oil and food with commensurate price escalation. Twenty will certainly see new paradigms emerge, as the perpetual growth style of economics is ditched in favour of… what, exactly?

My advice? Grow vegies, expect the worst and get ready.

Housing isn’t everything. It isn’t even close.

Quite rightly too, NSW’s Sydney is the best Sydney in Australia.