No silly season for election freaks

The election season is almost upon us thanks to that wonderful way the United States has of choosing its candidates.

No silly season for election freaks. The election season is almost upon us thanks to that wonderful way the United States has of choosing its candidates so we desperates don’t need Australian leadership speculation to get our kicks.

So let’s forget about whether Kevin will or will not challenge Julia and start concentrating on real contests like the Iowa caucus meetings to be held on 3 January. It will be followed a week later by the Republican New Hampshire primary and the race will well and truly be underway.

The Newt fading a little. A few doubts about Newt Gingrich seem to be reaching the betting market at last. Here’s a picture of what that excellent oddschecker.com site is showing as the prices offered by the British books and betting exchanges. The blue shadings show prices that have shortened recently and pink those that have blown. 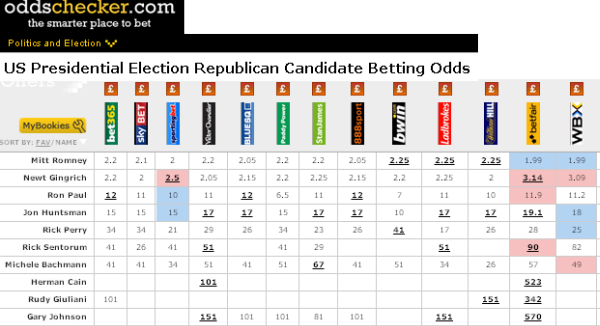 A similar drift in the Gingrich price has occurred at Intrade where things are shown in percents rather than as dividends.

Yet Obama is still the favourite. Perhaps the strangest aspect of the main event to come in November is that the Democrat President Barack Obama is still fancied to win a second term. On all the traditional measures – with the state of the economy being the principal one – his defeat should be near enough to certain. On all the factors that the Gallup pollsters consider significant in finding the winner, Obama is behind.

Election 2012: Survey-Based Metrics That Matter Most

The frequency: Gallup is now periodically tracking trial heats between Democrat Barack Obama and the top two leading contenders for the Republican nomination. Gallup will begin dailytracking of this measure, using seven-day rolling averages, once the GOP race narrows to two candidates or to the final candidate, depending on the timing. Gallup will report trial heat results for registered voters until October 2012. In October, Gallup will start reporting trial heat results based on registered voters and likely voters.

The history: Gallup first asked the trial heat ballot in the 1936 election race between Franklin Roosevelt and Alf Landon. Gallup has asked Americans for whom they plan to vote “if the election were held today” in the lead-up to every election since.

The question: Do you approve or disapprove of the way Barack Obama is handling his job as president?

Voter EnthusiasmThe question: Compared to previous elections, are you more enthusiastic about voting than usual, or less enthusiastic?

The question: Gallup bases its Positive Intensity Scores on two questions asked of those who say they recognize the name of a political candidate.

The frequency: Gallup tracked Positive Intensity Scores for the GOP contenders and candidates weekly from Feb. 28 through Nov. 27, at which point Gallup’s daily tracking of the GOP presidential race shifts to the Republican trial heat ballot. Gallup will periodically update Republicans’ positive intensity toward the GOP contenders until there is a nominee and will measure national adults’ positive intensity toward the Republican nominee and President Obama until Election Day.

The history: The Gallup Positive Intensity Score metric is new in 2011. Gallup bases the measure on its extensive work with calculating the effect of personalities on ratings in media settings. This research showed that while many viewers have mildly positive views of television personalities, those who generate strong reactions determine ratings.

The value: Gallup designed the Positive Intensity Score to measure the degree to which presidential candidates create strong emotions among voters, under the assumption that these candidates have a higher probability of motivating voters in the election. The metric also controls for name identification, which is particularly important early in an election when people know some candidates much better than others.

How would you rate economic conditions in this country today – as excellent, good, only fair, or poor?

Right now, do you think that economic conditions in this country, as a whole, are getting better or getting worse?

The frequency: Gallup tracks Americans’ economic confidence daily and reports the results in three-day rolling averages. The Gallup Economic Confidence Index is an average of two components: ratings of current economic conditions and Americans’ perceptions of whether the U.S. economy is getting better or getting worse. The Index can range from a maximum of +100 to a minimum of -100.

The history: Gallup began measuring economic confidence on a periodic basis in 1992, on a monthly basis in October 2000, and on a daily basis in January 2008.

The value: Consumer views of the economy are not always consistent with unemployment or inflation, and therefore need to be monitored separately to determine an incumbent president’s exposure to economic discontent. Gallup’s Economic Confidence Index closely mirrors trends in the Conference Board and Thomson-Reuters/Michigan consumer indexes, and provides near real-time measurement without long lags in reporting. According to Gallup trends, negative Economic Confidence readings late in a presidential campaign do not bode well for an incumbent’s re-election.

The question: What do you think is the most important problem facing this country today?

The frequency: Gallup asks the most important problem question monthly. The question is “open-ended,” meaning that respondents can provide any answer they want. Interviewers record the responses and then code them into broad categories.

The value: Americans’ assessment of the most important problem facing the nation provides important insights into the issues that influence presidential campaigns and motivate voters.

The question: In general, are you satisfied or dissatisfied with the way things are going in the United States at this time?

The frequency: Gallup asks this question on a monthly basis.

The history: Gallup first asked this U.S. satisfaction question using this format in 1979, and has asked it each month since 2001.

The value: U.S. satisfaction, similar to the “right track, wrong track” question other survey organizations use, provides a valuable summary measure of Americans’ economic and political moods. Gallup trends suggest satisfaction does not need to be at 50% for an incumbent to be re-elected, but should be near 35% or higher for re-election.

Is the paint dry, yet?

I have skimmed through most of Crikey’s pages on the forthcoming U.S. elections and it seems that not many people are commenting. I hope it is because most people that use this site are like me and could not care less about the U.S. elections. This post will probably not be read by anyone except Crikey personnel and i hope that they take the hint and drop the pathetic coverage of another countries elections.