There seems no end to the conspiracy against healthy eating in the modern world, even by quasi-official associations -- such as the Heart Foundation of Australia -- who should know better, writes Michael R James, a research scientist and writer.

There seems no end to the conspiracy against healthy eating in the modern world, even by quasi-official associations — such as the Heart Foundation of Australia — who should know better. Putting aside the potential ethical conflicts or outright conflicts of interest in the HFA’s current Mums United campaign to endorse margarine, their contention that this industrial product is healthier than butter is simply scientifically unfounded.

Since the early 1970s when more or less simultaneously, (1) margarine was being heavily promoted to displace butter in our diets, (2) I began biochemistry studies at university and (3) I began to do my own food shopping, I soon vowed to never willingly eat margarine, and certainly never to buy it. The following decades have done nothing to dissuade me from this policy, not least a decade living in France (more below).

The simplistic, sometimes outright false, story about dietary fats and processed foods goes from bad to worse in this irresponsible promotion of margarine over butter. On the disturbing issue of sponsorship or “co-operative marketing” of this campaign by the processed food industry (e.g. by Goodman Fielder makers of Meadow Lea margarine) David Gillespie has written recently and I won’t say more. But an evidence-based analysis does not support it.

Second, margarine is hydrogenated processed vegetable oil, i.e. it takes a processed food (chemically treated oil) and processes it further via another chemical reaction. The raw starting material — fields of Van Gogh yellow sunflowers swaying in the Provencal breeze — may be natural but the final material is several industrial processes removed from “natural”. The hydrogenation causes “saturation” of the fats and inevitable partial-hydrogenation creates some trans-fats, which today are recognised as major villains in heart disease because they increase LDL cholesterol and reduce HDL cholesterol. (Paradoxically many natural animal trans-fats, including the type in milk, have the opposite effect, i.e. they reduce LDL-cholesterol.) This is why processed palm oil — very high in “bad” trans-fats and one of the cheapest oils (from all those cleared tropical forests) and increasingly used by the processed food industry — is considered by health scientists to be particularly bad.  Margarine advertisements that allude to “polyunsaturated oils” are misleadingly referring to the starting material — the oils — before the hydrogenation.

So, ironically the past 50 years of increasing use of hydrogenated and partially hydrogenated oils has vastly increased our consumption of synthetic trans-fats, a prime culprit in unbalancing our HDL/LDL ratios in exactly the wrong direction, and doubtless contributing to heart disease.

Third, even though butter has higher levels of saturated fats (which is why it is less spreadable) it actually has none of the bad trans-fats! This compares to up to 15% trans-fat in margarines though today manufacturers often remove enough to be below mandatory label reporting levels. In addition, the production of margarine by hydrogenation of processed oil destroys any vitamins in the original oil. By contrast butter has useful amounts of vitamin A, D, E and K. 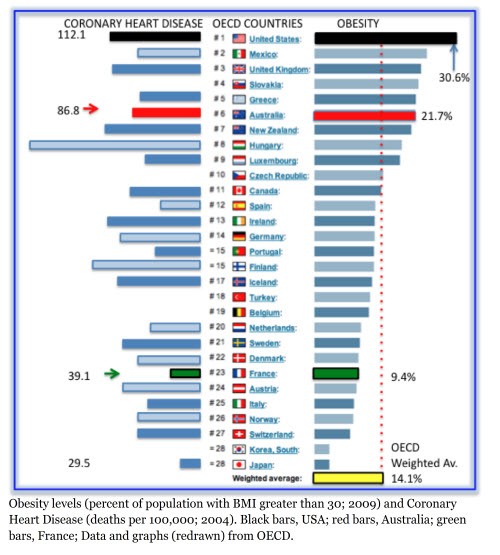 Fourth, while causation between diet and health outcomes is very complex, the French Paradox has never given any support to the processed food industry’s mantra (and many a doctor who did not pay attention during his/her biochemistry classes) about foods suich as butter, cheese or yoghurt contributing to heart disease. The French are the world’s largest consumers of dairy products and who can blame them with all that delicious butter, cream, whole-milk yoghurt, fromage frais and 360 types of cheese!

Although they eat about the same amount of animal fat as Americans, the French consume much more saturated fat because of the different amounts in their natural dairy products versus the processed vegetable oils used in the American diet of processed foods. Despite this the British Heart Foundation reported the French had about 70% of the incidence of coronary heart disease (CHD) compared to Americans while the OECD mortality due to CHD (2004, see figure) is 35% of the American rate. As noted, the reasons are complex and poorly understood but perhaps the fact that the French consume far less “bad” trans-fats — because there are none in dairy — may give a clue.

Fifth: genetics versus lifestyle. The French also consume less sugar compared to Americans and Australians. As Gillespie has pointed out in his books and articles, “diet” yoghurt may be lower in fats but then the manufacturers make things far worse by loading it up with much more sugar (increasingly disguised as “concentrated fruit extract”, which is mostly fructose, the worst sugar but that is another story). This is a not uncommon trap in processed foods labelled “diet” or gratuitiously awarded a HFA heart tick of approval.

Obesity is not unknown in France but, as the figure shows, it is 30% as prevalent as for Americans (Australians are lower but catching up fast). As the graph shows, Anglo countries (USA, UK, Australia, NZ) take four of the top seven positions in the obesity hall of shame while France is No.23 of 29 countries.Whatever additional factors (diet, exercise, healthcare, genetics) may be involved, compared to all this low-fat, over-sugared processed food, whole-milk dairy products clearly are not, per se, a major contributor to obesity or heart disease. On this point the National Health and Medical Research Council’s draft Australian Dietary Guidelines released on Tuesday take the understandable but still simplistic position of advising substitution of natural dairy with low-fat dairy.

And note, that while the Mediterranean countries (except Greece) do quite well, they perform no better than the French. Given that less than a quarter of France would be classified as on a Mediterranean diet (use of olive oil instead of butter) this again fails to implicate butter as a dietary villain.

The eye-catching remarkably low rates of obesity and CHD in Japan and Korea in the OECD data prompt a brief detour to the Far East. Herein lies another interesting lesson in genetic epidemiology. The significant intercontinental migration in the past century has allowed a natural experiment on the role of genetics versus lifestyle factors in chronic disease incidence. Among Japanese-American men (mostly in California) who have fully embraced the American lifestyle and diet, heart disease increases four to fivefold over their matched cohorts back in Japan. Japanese-Americans in Hawaii — who retain more of their lifestyle heritage — are intermediate.

On the other side of the Pacific when we look around at our native-born Asian-Australian compatriots we can observe a similar trend, unluckily for them. This suggests that genetics — at least at the whole population-ethnic level — is no protection against lifestyle diseases. Indeed it suggests strong health warning labels (instead of heart ticks) should be attached to the modern American — and Australian — lifestyle and diet, and the labels should be multilingual.

The lesson is that it is safer to ignore anything the processed food industry — or their proxies — say on health issues. Alas the same dictum seems to apply to those bodies ostensibly charged with giving more scientific and impartial dietary and nutritional advice.

Finally, I must disclose a conflict of interest. I have a personal jihad against the use of substitutes (oil, margarine, shortening from palm oil) instead of butter by Anglophone patissiers when they make their products, especially croissants. I plead with them to stop. Not only do real butter croissants taste so much better, they are healthier!

*Dr Michael R. James is a biomedical research scientist and writer. The author has no conflicts of interest or associations with industries or individuals discussed in this article.

Personally, I haven’t eaten butter or margarine for at least 30 years. Bread doesn’t need it. I find bread absolutely delicious just with a spread or even on its own. The packaged butter in restaurants goes back when I’ve finished the meal.

Good on you Michael, its great to see the non-dairy industry exposed. See a great cookbook just produced by some students at ANU: http://realfoodcanberra.org/cookbook/

So what do you need butter or margarine for anyway? Before refrigerators, butter was a way of storing dietary fat through the northern winter. Now it serves no more function than to provide an impervious layer between the sugary confections that we shouldn’t eat and the instantly-digested bread that we shouldn’t eat either.

Chuck it out of the fridge, you’ll soon get used to doing without. Have a glass of water instead and imagine that one day you will be slim again.