Yesterday, Andrew Penn emerged with one of the most interesting and challenging roles in corporate Australia, with Telstra announcing his appointment as chief financial officer. Is succession in the wind?

In recent weeks there has been considerable speculation about where the highly regarded former AXA Asia Pacific chief executive, Andrew Penn, would land. With no obvious significant financial services sector roles available, there was a belief he would probably end up somewhere in Asia.

Yesterday, Penn emerged with one of the most interesting and challenging roles in corporate Australia, with Telstra announcing his appointment as chief financial officer from March next year. It may not be a CEO position but it is one of the most critical positions in one of the country’s most important organisations at one of the key moments in its history.

When Telstra veteran John Stanhope hands over his office to Penn next year he will almost certainly have ended the most important task of his four decades-plus Telstra career: the negotiations with the federal government, NBN Co and the Australian Competition and Consumer Commission that will see Telstra gradually withdraw from providing its core fixed-line services as its network is displaced by the national broadband network and its customer base progressively transitioned onto the new network.

Stanhope will go down as a pivotal figure in Telstra’s history because of the success of those negotiations in circumstances where Telstra was threatened with everything imaginable if it didn’t accede to Stephen Conroy’s demands.

Not only has Telstra, the ACCC ultimately willing, locked in tens of billions of dollars of cash flows over the next several decades, but it has also potentially secured an even better outcome if the opposition wins the next federal election and abandons the NBN.

Telstra would still receive significant annuity streams from NBN Co but would retain most of its copper network and customers, and be in an even stronger negotiating position with the new government.

Penn, as Stanhope’s successor, will have big boots to fill and plenty of challenges left to tackle.

If the NBN rollout continues and goes more or less to plan, there will be big lumps of cash flowing to Telstra and then very long-term annuity income streams over the next few decades.

How that cash is deployed — how much is devoted to the very different business that will emerge as Telstra sheds its copper network and how much to capital management — will be a sensitive and quite complex series of judgments and, as CFO, Penn will have a major role in shaping them.

Given that there is a realistic prospect of a change of government and broadband policy in 2013, there is more than one dimension to the near-term framework within which decisions about the deployment of Telstra’s cash flows will have to be made.

The volatile and fast-moving nature of the sector and Telstra’s own rapidly evolving position adds another layer of complexity, as the sudden implosion in the Sensis directories business tends to illustrate.

Penn’s long history in financial services during a period of considerable change and growth and the multitude of senior roles he held within AXA should equip him well for managing the complexity of the issues a Telstra CFO has to confront.

His appointment adds to the sweeping overhaul Telstra’s CEO, David Thodey, has presided over since his appointment in 2009. Once Stanhope departs, Thodey’s senior management team will have been completely remade, with several prospective high-calibre names for the Telstra board to slot into their succession planning.

In his late 40s, with a five-year stint running one of the larger financial services business in Australasia and one with a very significant Asian presence, Penn would be a serious eventual contender within a group that now has a number of former CEOs and executives with very senior international experience. 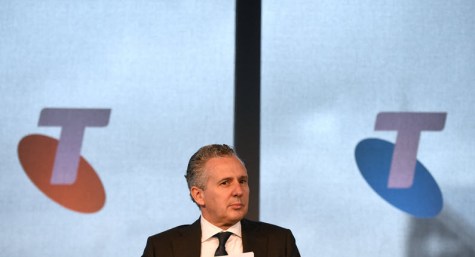 Will Telstra’s adventures abroad plug its leaks back home?

Telstra wins, we all lose in NBN deal