Strong-arm response from The Oz against claims of ‘being used’

All eyes were trained on how The Australian this morning would react to the extraordinary spray dished out against it by outgoing Office of Police Integrity director Michael Strong on Jon Faine yesterday.

All eyes were trained on how The Australian this morning would react to the extraordinary spray dished out against it by outgoing Office of Police Integrity director Michael Strong on Jon Faine yesterday.

Strong reckoned The Oz was pursuing a vendetta to crush his organisation and tendered as evidence 41 articles on the matter by journalist Hedley Thomas. Sure enough, Thomas sharpened his keyboard again, producing this exclusive built around quotes from criminal lawyer Bernie Balmer, who said certain sections of the media “had been used” to propagate the OPI’s version of events around investigations including Operation Briars. 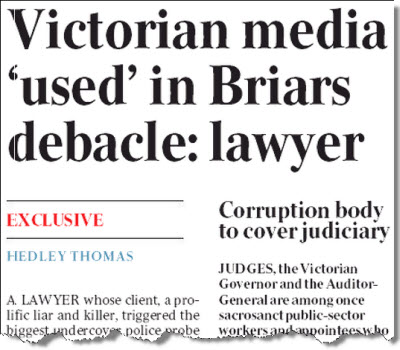 He quoted Balmer as saying “he was not in the coppers’ camp” and was motivated to speak out against the “grossly unfair” treatment meted out by the Briars investigation into the 2003 murder of vampire gigolo Shane Chartres-Abbott, which continues.

Balmer’s outspokenness, Thomas said, was “highly unusual because he is in effect rubbishing the evidence of his own former client, a repeat perjurer, gangland murderer and peddler of false intelligence, who went to Mr [Victoria Police chief commissioner Simon] Overland in early 2007 with a story implicating police in an unsolved murder.”

But missing from the yarn was any disclosure that Balmer is hardly a stranger to the two former police interviewed in relation to Operation Briars — Peter “Stash” Lalor and David “Docket” Waters. Balmer confirmed to Crikey this morning he knew the duo.

“They’re acquaintances … people who … put it this way, they’re not mates but I talk to them from time to time. Where there’s an injustice I feel the need to speak up,” he said.

And while Balmer had once acted for the hit man in the vampire case, who cannot be named for legal reasons, he was not his lawyer in 2007 when Briars cranked up.

In fact, Balmer gave evidence to the OPI agreeing with Lalor’s version of events. He described the alleged collusion between the hit man and Lalor to work up an alibi as ”complete bullshit”.

The Oz and Thomas have been writing on Operation Briars for years, with its most extensive intervention being this piece last June claiming Age journalist Nick McKenzie — who broke the story of Briars in September 2007 — had deliberately omitted evidence given by Lalor and Waters to the OPI.

McKenzie told Crikey that he was “surprised that The Australian had not acknowledged that Bernie Balmer is an acquaintance of both Lalor and Waters in today’s story. The Australian also did not make it clear that Balmer was not acting for the hitman when he made the corruption allegations against both ex-policeman.

“In 2007 The Age broke the story that a secret police taskforce called Briars had been formed to investigate allegations made by the hit man against two ex-policeman,” he said. “Our reporting of this story has been repeatedly misconstrued by The Australian as part of its reporting about the OPI and the OPI’s subsequent inquiry into Paul Mullett and Noel Ashby.

“The Australian‘s characterisation of my work in breaking the Taskforce Briars story is wrong and it is frustrating to see it continually misreported,” he said.

But strangely in today’s story there is no mention of Operation Diana — a spin-off probe into leaks from Operation Briars that focused on Mullett and Ashby. A senior Age source said this morning that Thomas was “getting confused”.

Thomas told Crikey Balmer had told him he wasn’t close to the duo and was speaking out due to a genuine concern with Briars’ ineffectiveness.

“You need to go back and look at the source material mate, you need to be honest in your reporting,” he said.

Thomas claimed Crikey was “on the teat” of the OPI and Overland.

Vendetta journalism? The murky story behind The Oz, the OPI and Overland

Hedley Thomas defends Overland story: ‘… the facts speak for themselves’

So from the sow-pens comes the squeal “You’re on the teat, but I’m for real”?

The worst thing about this saga is that it is so obvious what happened, who got off scot free and why the Oz is reporting every ratbag and crook who has harsh words to say about either Simon Overland or the OPI(under Michael Strong) as though they have some sort of credibility. You can only shake your head. The role played by The Australian newspaper just proves why it is so unfit to determine what people think about various events. But that doesn’t stop “our ABC” from slavishly following every rubbish story that they print.