In today's Media Briefs: wut with the old, in with new at Pagemasters ... Front page of the Day. ...Leveson inquiry: NotW's Neville Thurlbeck to give evidence ...Austereo asks: should we sack Kyle? and more ...

Out with old, in with new at Pagemasters.

Informed sources say the Pagemasters agreement with The Age is a continuing problem inside Media House. There are consistently more errors than allowed under the agreement between the two entities. And The Age has cut back on the number of “change pages” allowed once the presses have started running — each night the powers that be have to decide which mistakes they can live with and which should change. In May, Fairfax CEO Greg Hywood announced 82 subeditorial redundancies across his four major metropolitan mastheads, representing about 1500 years of experience in journalism.

The error rates may be the result of reports that Pagemasters’ Melbourne office is cutting back the shifts of some former Age people and replacing them with youngsters … as part of a cost-cutting exercise. — Andrew Crook

Front page of the day. There’s been plenty of criticism in the Russian elections last Sunday, and with protesters rallying it’s interesting times ahead … 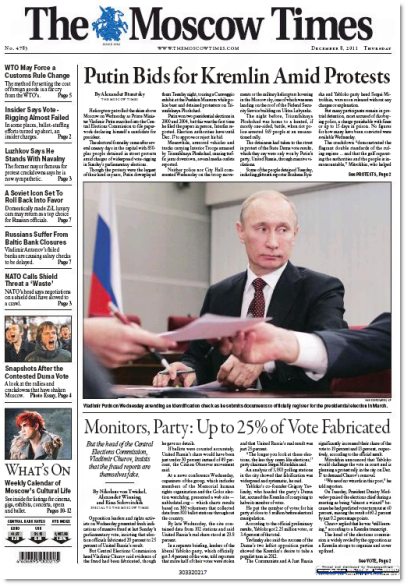 “Neville Thurlbeck, the former News of the World chief reporter, is to appear before the Leveson inquiry next week. Also lined up to give evidence is the News of the World reporter whose name appeared on the Kate McCann private diaries story.” — The Guardian

“Kyle Sandilands is already under fire and hemorrhaging advertisers after his recent woman-bashing broadcast, but now Same Same can reveal a recent caller on his show advocated ‘killing a tranny’ as the show’s hosts sniggered.” — Same Same

“Advertising revenue in the Sydney radio market saw one its the biggest falls in recent years during November. Compared to November 2010, the market dropped by 6.79% to $19.112m according to new numbers issued by Commercial Radio Australia.” — mUmBRELLA

“The website for Scottish titles the Herald, Evening Times and Sunday Herald has introduced a paywall to its content, allowing access to 10 articles a month before introducing a subscription charge.” — journalism.co.uk

“Twitter used to be a cool place to share your succinct thoughts. Now al-Shabab, the vicious Somali allies of al-Qaida, is using it as a propaganda venue.” — Wired

Who cares if journalists break embargoes?

“When The New Yorker’s David Denby broke an embargo on reviewing The Girl with the Dragon Tattoo earlier this week, Sony was ‘furious.’ Denby praised the movie but had published his review more than a week before he was supposed to. The incident prompted journalists to question the advantages of an embargo.” — Poynter