Whatever would we do without a round of bank bashing stories this time of year, when all other news content is reduced to How to Baste Your Turkey and Top Ten Top Tens of 2011...

Whatever would we do without a round of bank-bashing stories at this time of year, when all other news content is reduced to Basting Your Turkey, A How To and Top 10 Top Tens of 2011.

As Bernard Keane and Glenn Dyer point out today, it was exactly this time last year that we were engaged in a debate about the big banks and how they pass on interest rate changes.

The papers have gone big on the Big Four’s refusal thus far to pass on the RBA rate cut (as we hit publish ANZ became the first to break ranks and agree to pass on the full cut), with News Limited tabloids stretching the Grinch imagery to epic proportions. Yes, we’re a little bit jealous of this; props to The Daily Telegraph Photoshop boffin responsible for this hideous/ridiculous/masterful piece of work: 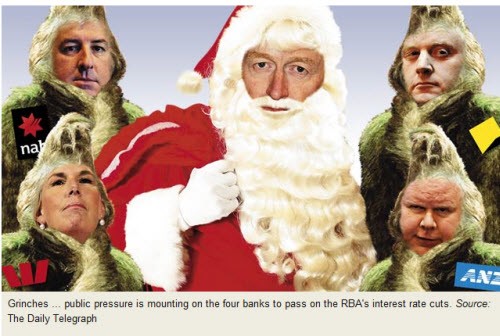 Besides the fact that the RBA will keep cutting rates until banks do, the additional fact that most of us don’t reduce our mortgage repayments when interest rates fall, and that other little inconvenient fact that savers stand to lose from falling interest rates, the real story here is business lending and the failure to cut there — that’s where the banks’ recalcitrance really hurts, because it directly affects business activity and employment.

And speaking of employment, the latest jobs figures are out, and they’re worse than expected, with the jobless rate rising to 5.3%. All of which should feed into the bigger picture, the bigger picture that a media appealing to angry householders and working families residing on Struggle Street, doesn’t quite cover off on.

You talk about banks and Grinches, no one has actually looked at the other side of the equation, you make brief mention of reduced interest for savers, definitely true, but what about the federal government’s, I guess Jenny Macklin as the primary person responsible, lack of action on reducing the deeming rate as pertaining to pensioners and I guess other social security beneficiaries.
The government hasn’t made any adjustment to the deeming rates for quite a while now, regardless of the fact that there have now been two decreases in the official cash rate and that the deeming rate is now above the cash rate.
If the banks have been somewhat slack, the government’s lack of action is downright reprehensible as by their lack of action they are actually depriving a number of people from what most would consider to be their just entitlements.
I guess it’s in line with the perception of this government that they don’t care about pensioners, after all, its a well known fact in Gillard land (as reported previously in the media) that pensioners don’t vote Labor.

Less than a third of OZ households have a mortgage, and a relatively small percentage of those are/were under stress yet it is that cohort who can swing marginals, being younger, dumber & lower class – the battlers’ kids who bought the Rodent’s aspirational B/S of individual contracts, rugged quid chasers and tradies who rely upon their wives to do the numbers, BAS and similar krapola put in place by the Smirk, just to ensure that they never quite rise above the water level upon which the BtR’s swan.