Gross domestic product figures out this morning give no support at all to those who attacked Treasurer Wayne Swan for being too optimistic last week with his revised growth forecasts.

Perhaps Wayne is understating. Gross domestic product figures out this morning give no support at all to those who attacked Treasurer Wayne Swan for being too optimistic last week with his revised growth forecasts.

Growth of 1% in seasonally adjusted terms during the September quarter was a good result by any standard and but for the weather induced problems in Queensland at the start of the year things would be very buoyant indeed.

Here’s how the individual states and territories are doing: 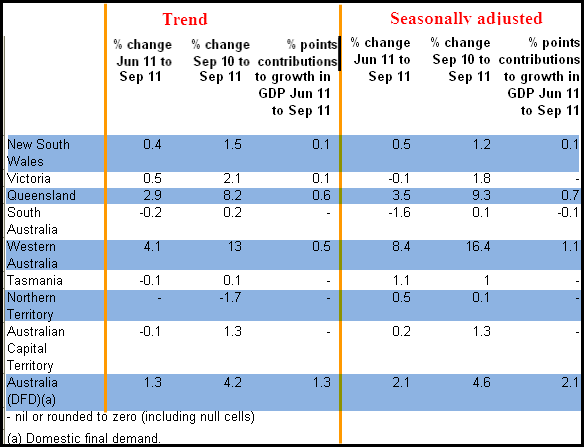 Changing shares of the economic cake. From an ABS paper with the frightening title Experimental Estimates of Industry Multifactor Productivity, 2010-11 come the figures behind this little graph: 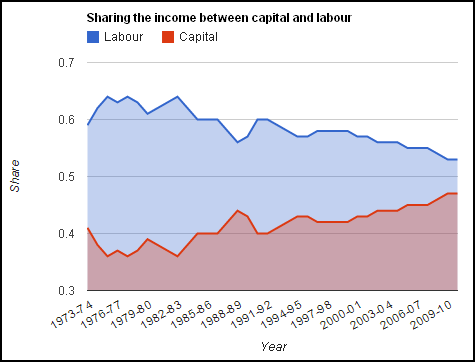 The price of Chinese progress. They are doing a roaring trade selling face masks in Beijing as the residents begin to panic over pollution. Visibility has got so bad that hundreds of airline flights have been cancelled and traffic halted on major motorways.

While the city’s Municipal Environmental Protection Bureau sticks to its line that air pollution is merely “moderate”, a monitor on the roof of the US embassy tells a different story. Its pollution readings are available online via Twitter. 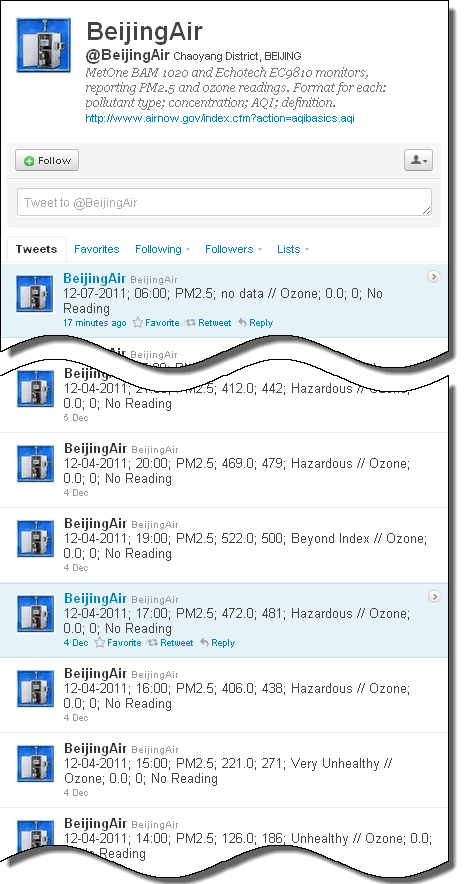 One recent reading, you will notice, went off the chart beyond unhealthy, very unhealthy and hazardous to be described as “beyond index.” 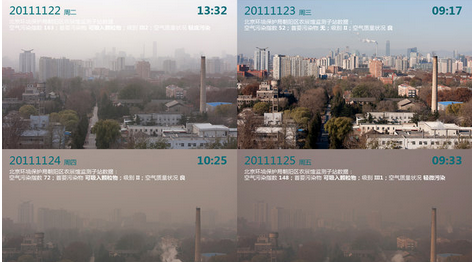 And the English language China Daily website is not buying the “moderate” spin either as the picture above shows.

Understanding political journalists. Words of some wisdom from the Paul Krugman blog:

One crucial thing you need to understand about political journalists is that with some honorable exceptions, they don’t know or care about actual policy. In a way, that makes sense — the skills needed to cultivate contacts, to get the inside scoop on what’s going on in Congressional scheming or campaign war rooms, are very different from the skills needed to interpret CBO spreadsheets. The problem, however, is that all too often political journalists mistake the theater of policy for reality (or don’t care about the difference).

Time for a Victorian. I don’t know why it is but they are quite different beasts these Victorian and New South Wales branches of the Liberal Party. The southerners tend to see their party name as actually meaning they are liberals. The northerners use the party label Liberal simply to hide some quite illiberal views.

The story in the Sydney Morning Herald this morning quoting Malcolm Fraser as he prepares to deliver a Gough Whitlam oration turned my mind to this question. His politics had not shifted, said the last Liberal Party Prime Minister to come from Victoria, but those of the Liberal and Labor camps had “moved leagues to the right”.

How true that is!

Um, not sure about the Victorian Liberals. They are pretty illiberal too. On the back fo making it illegal to swear, now it will be illegal to drink a beer while driving, irrespective of being under the blood alcohol limit.