News.com.au‘s Struggle St struggles. We’re sure News.com.au‘s infographic and accompanying story — “Struggle St vs Easy St – ‘no one knows’ how to fix it” — meant well, but it appears to have somewhat missed its mark:

Here are the two Australias — where the real great divide is between those on Struggle St and those on Easy St.

News.com.au‘s Cost of Living survey, now completed by more than 30,000 Australians, has found the nation’s two-speed economy is creating a two-tier community. Haves and have-nots are split almost down the middle and ‘battler belts’ are scattered among pockets of prosperity in our major cities and regional centres.

As the Reserve Bank cuts the official interest rate for the second in as many months, this map shows where relief is most needed.”

So, for example, the leafy, exclusive Melbourne suburb of Toorak — home to captains of industry, Melbourne old money and celebrities alike — is a “battler belt” where “relief is most needed”? Struggle street indeed. 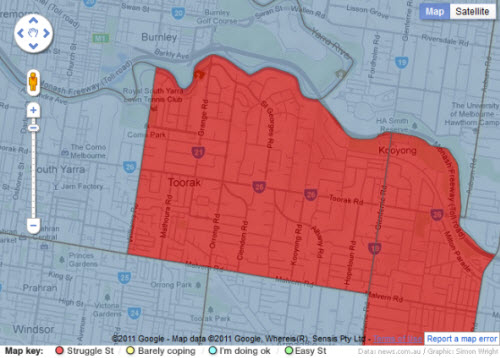 Gay marriage and knowing your history. How did the cultural left win the war on marriage equality, asks Kevin Donnelly at The Drum? His answer? Radical leftists completed what he claims Antonio Gramsci called “the long march through the institutions”, to control the heights of debate.

These cunning leftists apparently commanded the cultural heights, and changed the meaning of words — “discrimination” for example, from a positive thing to a negative thing — in a manner described by St George of the Orwell. Where will it end, Donnelly wails: “Same-sex marriage “raises the problem that if marriage is now to include gays and lesbians, what right do we have to exclude bisexual and transgender people?”

Um, Kevin, I don’t mean to alarm you, but bisexuals and transgender people are already allowed to marry — as long as they marry someone of the opposite sex. Transgender people already have some leeway in which gender they classify themselves in and, um, on bisexuals, do you actually know what they actually are? The simpler explanation for the success of the marriage equality campaign is that the cultural base of social life changed over the past two decades, from a vestigial Judeo-Christian one, to one where market relations and consumption — and the notions of formal equality, exchangeability  that come with it — came to the centre of social life.

Attitudes have been manipulated, Kevin wails again: “To be conservative, on the basis that there are some things from the past that are worthwhile holding on to, is to be old-fashioned, out of touch and guilty of continuing past injustices.”

Indeed, and what has convinced people that conservatism is a bad thing? How about three decades of top-down economic reconstruction, in which people were told that the new economy, new technology, globalisation, cutting-edge, next gen, etc, were compulsory, and the worst things in the world were protectionism, localism, collectivism, etc. The path to marriage equality didn’t begin five years ago — it began, you might say, when Sunday trading was abolished and capital finally triumphed over the Sabbath, quashing any notion that the state should have any regard to traditional values in setting the rules.

Your problem isn’t the left, Kevin — it’s your compatriots on the Right — the Turnbulls, Kennetts and Costellos — whose vision of social life involves a world entirely composed of individual contracts between people, and no institutions to be spared ceaseless transformation. In that framework, the objection to marriage equality becomes as archaic as trying to maintain a commitment to fault-only divorce.

The “cultural left” could have redefined the whole dictionary but they wouldn’t have got anywhere much before around 2005. It’s only after a period in which capital has made all cultural barriers to individual wants into a denial of human rights that the campaign became possible — because marriage equality cuts with the cultural grain of neoliberalism. All the marriage equality movement had to do was work hard, and do its research — a wise move, if only so that one knows that it was Rudi Dutschke, not Gramsci, who advocated a “long march through the institutions”. — Guy Rundle

Front page of the day. Forget the banks’ collusion by not passing down interest rate cuts, what about News Limited metro newspapers’ collusion of using similar Grinch/Scrooge front pages across the country this morning?

Subterfuge can be in public interest, says Guardian hack

“The Guardian‘s investigations editor told the Leveson inquiry into press standards on Tuesday that the use of subterfuge by journalists can be justified in exceptional circumstances if they are pursuing a story that is in the public interest.” — The Guardian

“ABC managing director Mark Scott said yesterday parts of Australia Network and Radio Australia will be merged along the lines of the BBC, a day after control and funding of the overseas television service was handed permanently to the public broadcaster.” — The Australian

How to report the end of the world

“Let’s say, just for giggles, that the word was ending. Could be an alien invasion, a pandemic or nuclear annihilation. If one of those scenarios became a news event, how would it be covered?” — New York Times

US Republicans watch the worst shows on TV

“Entertainment Weekly hired a fancy research company to figure out what shows liberals and conservatives like best. Conservatives like, well, a whole bunch of crap.” — Gawker

“The Associated Press has compiled a Holiday Style Guide of words, phrases and definitions to help its members and subscribers with spelling and usage of traditional terms for religious and cultural holidays in December and January.” — Associated Press

I am intrigued that the long running support for gay rights amongst the Green Party for 20 years complete with rainbow flags symbolicly placed along that journey, is not seen or understood by the Big Meeja (eg Canberra beltway) as the real politik motive for the ALP embrace and momentum for equality.

Certainly the ALP Left – not adverse to defending their inner city establishment turf with personal smears and non sequiturs whenever it serves a purpose – need something to stop the traffic in the other direction on ‘left’ wing policy areas.

A classic Planet Janet moment:
This politician/social movement/film isn’t saying/doing exactly what I want it to do, so it must be crap.

She might make her own Thatcher film, one day.

Re: Front age of the day

For the past 24 hours the news headlines have gushed (initially) about this wonderful Christmas windfall for homeowners. Pardon my pedantry: people who OWN their homes don’t give a rat’s, it’s the home-pseudo-owners who live on borrowed funds who may benefit.

And now we’re into stage 2 of the over-baked news story – will the banks show their bast@RD streak or will they pass on the rate cut to the home-pseudo-owners? There would be plenty homeowners with term deposits who hope the banks don’t cut rates.

Crikey, how about publishing a piece on how many Australians have term deposits as a comparison with how many have mortgages.

Re the Guy Rundle piece on gay marriage and knowing your history, I agree Donnelly’s comments are ill-informed. Transgenders, like everyone, can an enter a “heterosexual by birth certifcate” marriage. Equal marriage would end the issue of forced trans divorce, where the partner in a marriage who affirms their identity either has to be stuck with an innaccurate birth certificate or divorce their partner where there may not be irreconcilible differences.

However, I disagree with Guy’s comment, “Transgender people already have some leeway in which gender they classify themselves in.” Currently the stautory birth certificates laws are focussed on surgeries and people therefore need to meet those surgical requirements before changing their legal (emphasise) classification for birth certifcate purposes.”

Happily the recent unanimous High Court verdict in the case of AB and AH vs WA (6/10/11) questions the stautory laws, at least directly in WA and SA and by putting pressure on all 8 State and Territory governments to act. It is a violation of human rights to force some people to have documentation that differs from the reality of their lives. The quicker birth certificates are based on affirmed identity the better.

This is the kind of heroic and detailed work that shows up those warmists for the Trots they really are!!