Gillard: pro gays, anti nuclear. This little snippet has been doing the rounds on Facebook. We’re not sure what publication or year it’s from — if you know, drop us a line — but it’s clear the prime minister wasn’t always for uranium exports and against gay rights … A new speech writer for the […]

Gillard: pro gays, anti nuclear. This little snippet has been doing the rounds on Facebook. We’re not sure what publication or year it’s from — if you know, drop us a line — but it’s clear the prime minister wasn’t always for uranium exports and against gay rights … 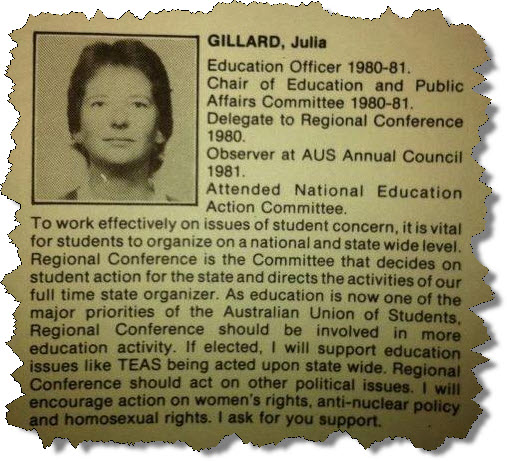 A new speech writer for the PM? Meanwhile, there was plenty of criticism of Gillard’s lacklustre speech at the ALP national conference over the weekend. So much so that Crikey hears the hunt is on for a new ghost writer. Gillard’s office was denying any move today — “there is absolutely no truth to any of your claims,” a spokesperson told us — but two tipsters report a search has started for someone to reshape the prime minister’s rhetoric. One insider says they could come from overseas …

Drink responsibly, Fairfax reminds staff. The Fairfax share price may be in the toilet, but that’s no reason to get on the sauce and offend your colleagues, the CEO of the company’s New Zealand operations has warned staff:

From: ** Fairfax – Communications
Subject: Message to All Staff from Allen Williams
Date: 5 December 2011 8:29:06 AM NZDT
To: undisclosed-recipients: ;

As we reach the end of another full year, I would like to acknowledge and thank everyone for their contribution to our Company.

In the spirit of ensuring that we create a safe and inclusive environment in which everyone can enjoy their celebrations, I would like to take the opportunity to remind you all of our ongoing responsibilities and the standards of behaviour expected as we attend Christmas / end of year functions.

Any of us who are attending functions hosted by Fairfax, customers or clients, must bear in mind that we remain bound by our Company’s policies. We continue to represent the Company, even when we attend functions outside our normal working hours, or our normal workplace.

All of us are to be aware of our behaviour.  If we behave in a manner that others find offensive, intimidating or harassing, we are liable for our actions. Further, we also risk our personal and professional reputations.

You are reminded that:

I encourage everyone to enjoy end of year functions, and I wish everyone a safe and happy festive season.

A very similar stern warning to one delivered by then-Fairfax CEO David Kirk in 2007, as Crikey reported at the time. The reminder seems timely — one Fairfax journo from across the ditch reports (reader discretion is advised):

“Let me tell you about a recent end-of-the-year staff function at Telecom’s systems integrator arm, Gen-i in Wellington. A veteran Computerworld journalist was invited to it, and may have arrived somewhat worse for wear. He proceeded to vomit on the carpet and also sharted himself. People who went to assist recoiled as the pungent smell indicated what had happened, but the journo was bundled into a cab nevertheless for immediate evacuation. In the cab, the journo continued to purging himself from both ends. There was a bill of course for soiling the taxi, which he graciously insisted that Gen-i should pay. Computerworld here is part of Fairfax, but I note that Allen hasn’t banned vomiting and sharting in his Christmas decree.”

Bells aren’t ringing at ABC HQ. Over at the public broadcaster there seems to be a distinct lack of Christmas spirit. We revealed on Friday the ABC cancelled its traditional Christmas party at Ultimo HQ, which has angered at least one (understandably anonymous) staffer who vented their spleen to us late Friday:

“The poor, long-suffering, hard-working staff at the ABC are getting no Christmas party this year even though we usually part for it ourselves anyway. Plus this year we get no corporate Christmas cards to give away. We do get our little ABC gift shop voucher (yay us) but meanwhile that nice Mark Scott can afford to throw parties offsite in a posh hotel in Darlinghurst to announce the upcoming 2012 season of programs and a big party next week to farewell chairman Maurice Newman. Yep, I am angry. Thank you so much  for letting me vent while I bust my ass working over the holiday season with nothing to tell me I’m in the holiday season but a simple tree WE paid for in our own office.”

Has your boss cut back on the festivities? Or is a more lavish soiree planned? Dish the dirt on your party — and who disgraces themselves — to us: email [email protected] or use the entirely anonymous form.

Optus TV goes dark. Optus customers were left in the dark over the weekend after gremlins cut off the cable TV feed. One customer — upset that the Test match disappeared from his screen — reports being told a “major software malfunction” at Foxtel’s end was responsible for the outage. It was still out as of last night.

“I ask for you support” -seems her tin ear and attention to detail was apparent very early.

Re Julia Gillard speechwriter. Sadly, it is not only the content of the speeches, it’s their repetition. It is the form.
In particular the ponderous pronunciaton of ‘a’. Such as a-nother (as opposed to an-other), ‘a policy’ ( most of us say ‘uh policy’ and run the sounds together somewhat). pretty well a-anything.