It seems to be the political orthodoxy in most developed country democracies these days that government spending must be cut to produce budgets that balance.

Doing himself no favours. If there was one major achievement from the ALP national conference it was to remind members of the parliamentary caucus why they dumped Kevin Rudd as their leader. The man acts like a petulant small child. If he really does want to try for the top job again then silence would have been his best policy. Surely Labor could not be so silly as to restore him to the prime ministership.

Gillard would be well pleased. As for the current incumbent, she would be quite pleased with the way things turned out. Julia Gillard had her way on all the major decisions and a leader could ask for no more from this gathering. She sensibly opted for the centrist position on most things and if that encourages a few more Labor voters to the Greens it really matters not. Their lower house preferences return.

An interest rate bonus. The Reserve Bank board looks set tomorrow to give the government a Christmas bonus by way of another cut in official interest rates. If the reduction does come, as the Crikey Interest Rate Indicator is suggesting, it will reinforce the slight improvement in Labor’s prospects that recent opinion polls are pointing towards. 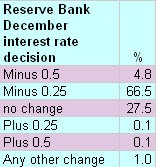 Who’s making what. Gross operating profit figures out from the Australian Bureau of Statistics this morning show that across all industries they improved at a trend rate of 3.7% in the September quarter. The financial and insurance category leads the way. 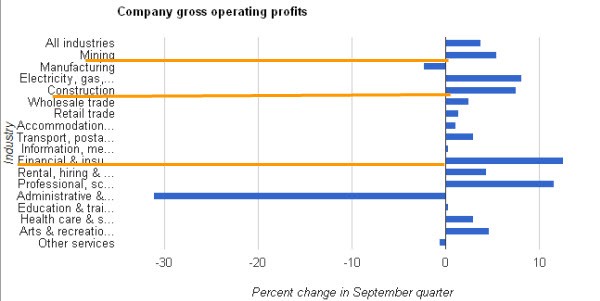 The so-called virtues of austerity. I have listened in the last week to two finance ministers — the Australian Treasurer and the UK Chancellor of the Exchequer — extolling the virtues of fiscal austerity. It seems to be the political orthodoxy in most developed country democracies these days that government spending must be cut to produce budgets that balance.

There is a difference, of course, between the circumstances in the two countries. Australia survived the world financial crisis without slipping into recession and even Wayne Swan’s growth expectations revised down in his mid-year economic update show a country still growing. Unemployment might rise in the next 12 months but announced spending cuts are predicted to increase it only marginally.

In the UK, Chancellor George Osborne does not have the benefit of booming mining exports to Asia to drag his economy back to healthy growth. His forecasts of the last week suggest that a dip back into recession after a short period of mediocre growth is the likely outcome. Government debt is likely to increase for many years yet despite ever more proposals to limit spending.

The paradox confronting the British is that the more they cut government spending the bigger their deficit becomes and the more they must borrow. Paul Krugman put it succinctly in a recent post on his blog after quoting this from an IMF report: “Short-run fiscal and monetary stimulus is associated with smaller medium-run deviations of output and growth from the precrisis trend.”

That is, history says that a financial crisis reduces long-run growth potential if policymakers don’t limit the short-run damage it does.
And yet what’s happening in Britain now is that depressed estimates of long-run potential are being used to justify more austerity, which will depress the economy even further in the short run, leading to further depression of long-run potential, leading to …
It really is just like a medieval doctor bleeding his patient, observing that the patient is getting sicker, not better, and deciding that this calls for even more bleeding.
And the truly awful thing is that Cameron and Osborne are so deeply identified with the austerity doctrine that they can’t change course without effectively destroying themselves politically.
As the Brits would say, brilliant. Just brilliant.

This chart from BofA Merrill Lynch Global Research illustrates the same point as it compares Italy, Ireland, Spain, Portugal and Greece with Germany. 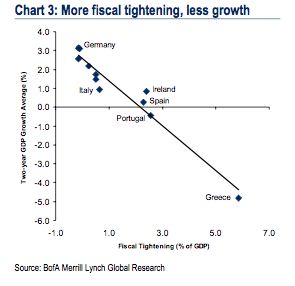 The case against austerity seems quite compelling to me and already the British public seem to be having some doubts about whether they were right to reject the Labour Government at the election last year. While the ICM/Sunday Telegraph poll at the weekend has the Conservatives a couple of points higher than Labour, YouGov’s weekly poll for the Sunday Times has topline figures of CON 35%, LAB 43%, LDEM 9%, Others 13%.

All this polling “evidence” makes me wonder why the betting markets still have the Conservatives favourites to win the next election. Surely there are now many in the Liberal Democrats believing that, with their own support, according to the pollsters, having halved they should leave the governing Coalition.

I am contemplating having more on a Labour victory.

A history of government debt. While musing about the fashionable economic obsession with getting rid of government debt I turned to the IMF’s database to look at what has been Australia’s situation over the last century and  bit. 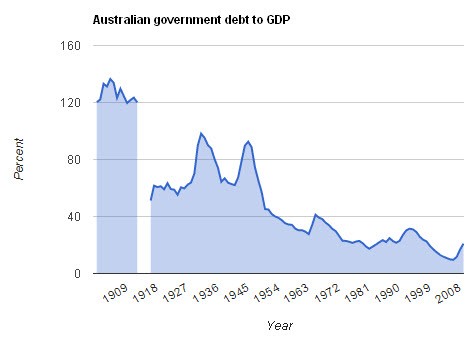 It does make me wonder what all the fuss is about.

What about Australian Private Debt?

‘Surely Labor could not be so silly as to restore him (Rudd) to the prime ministership.’

Richard, they were dopey enough to remove him so you shouldn’t underestimate them.