The ABC is losing Lateline host Ali Moore, who hosted her final program on Friday night. She's off to Singapore with her family. Plus other ABC news changes and media news from around the globe.

News changes at Aunty. The ABC is losing Lateline host Ali Moore, who hosted her final program on Friday night. She’s off to Singapore with her family. Lateline returns on January 30, next year with Emma Alberici joining Tony Jones as a program host. She’s currently Europe correspondent for the ABC and will return to Sydney over the break.

The ABC also said that Karina Carvalho will be joining Michael Rowland on ABC News Breakfast in 2012 while Virginia Trioli is on maternity leave. Carvalho is Western Australia’s 7pm news presenter and will start co-hosting breakfast from February. And the ABC plans to extend the Monday-to-Friday breakfast program to weekends. The Weekend Breakfast program will be hosted by Andrew Geoghegan and Miriam Corowa and will start in February.

The director of ABC news, Kate Torney, also confirmed that Chris Uhlmann will solo host 7.30 next year, while Leigh Sales is on maternity leave and Heather Ewart will step back into the role of political editor. And the ABC plans to simulcast an hour of The Drum on News 24 and ABC for six weeks from Monday, January 9 at 6pm. The ABC said Annabel Crabb, Steve Cannane and Tim Palmer will share the hosting duties Monday to Thursday and on Friday nights, Peter Wilkins will host a sports edition of the program. — Glenn Dyer

Front page of the day. Herman Cain is out of the US presidential race, but does that mean the end of Mike Tyson send-ups? We hope not. 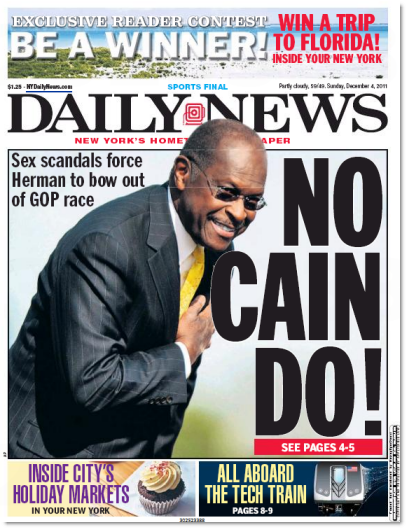 The Department of Corrections. We are not sure how New Zealand newspaper The Dominion Post got this so wrong: Australian skipper Michael Clarke the younger brother of English seamer Darren Clarke? 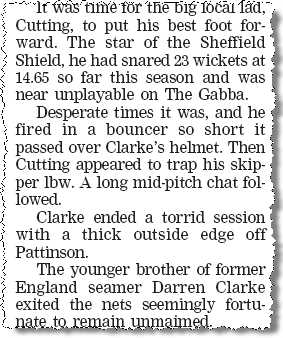 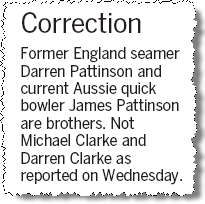 “Court reporters could be compromising trials on a daily basis through live tweeting because the laws have not kept pace with social media, an expert says.” — The Australian

“Two liberal Russian media outlets and an election watchdog said their sites had been shut down by hackers intent on silencing them over allegations of violations in a parliamentary vote on Sunday.” — The Jerusalem Post

“Slowly coming to light in local media and dissected on Twitter by eager followers of Egypt’s electoral process, figures emerged Saturday that offered details of the success of Islamist parties in the first phase of parliamentary elections last week.” — The Washington Post

The debate on the Indian media deepens

“Discussion and debate over the key issues relating to media standards and performance — and in particular what is to be done about them — raised by the Press Council of India (PCI) chairman Markandey Katju continue in different places.” — The Hindu