John Hartigan finishes up as News Limited CEO today, 41 years after he started at Rupert Murdoch's Australian empire. Staff are preparing to stand to attention with a final salute ...

An honour guard for Big Harto. John Hartigan finishes up as News Limited CEO today, 41 years after he started at Rupert Murdoch’s Australian empire. Staff are preparing to stand to attention with a final salute …

As many of you are aware, it is John Hartigan’s final day at News today after 41 years of service. As a little send off management would like Holt St staff to assemble downstairs to form a guard of honour to farewell him as he leaves the building.

If you would like to be part of this, please assemble on the ground floor from the lifts to the security gates.

This is currently set for 12:45pm but I will email you all again shortly to confirm the time as it hasn’t been set in stone as of yet.

PLEASE FEEL FREE TO FORWARD TO ANYONE WHO YOU THINK WOULD LIKE TO JOIN IN.

Update: Harto has won a stay of execution. News Limited insiders say the honour guard will now be held at 4.30pm.

Front page of the day. It’s been all doom and gloom on the world’s financial markets of late, so when the markets finally had a good day, the New York Post — home-town tabloid of Wall St — was the first to celebrate: 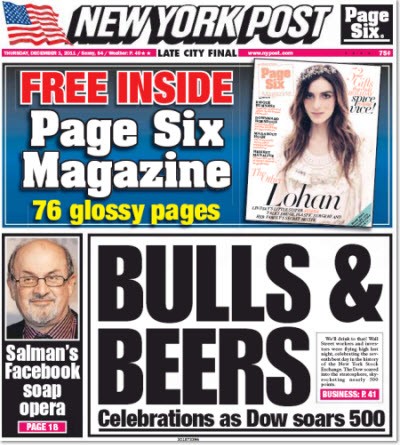 “A former News of the World journalist arrested by detectives investigating phone hacking at the paper has said she has ‘never been involved in the interception of telecommunications in any way’. — The Guardian

“The British Press Photographers’ Association (BPPA) has hit out at the Leveson inquiry over what it called the ‘one-way traffic from witnesses criticising photographers’.” — journalism.co.uk

“The Sydney Morning Herald has lost an eight-year defamation battle with three Serbian restaurateurs who claim a scathing review caused their business, Coco Roco, to collapse overnight.” — The Australian

“Yesterday The New York Times announced an overhaul of its online commenting system, and just like any news of this magnitude, people have been completely incapable of dealing with it rationally.” — Fishbowl NY

“Google rolled out an ambitious new look for YouTube on Thursday, with a fresh, clean interface that has less clutter and more uniformity across channels. With this new design, Google is hoping this will make it easier for people to find stuff they like while also luring them into spending more time on the site.” — The Daily Beast