Matthew Stevens joins The Australian business exodus to the Australian Financial Review. Plus, an Oz sub with your sub and other media news of the day.

Stevens joins Oz business exodus to Fin. The Australian’s business section is mourning the loss of another high-profile hack after Matthew Stevens jumped ship to bitter national rival The Australian Financial Review. Stevens’ decision to shift to the other side of the Yarra brings to four the number of high-profile staff by new Fin editor Michael Stutchbury’s poaching raid, who was himself lured from News by Australian turncoat Brett Clegg. The gravy train back to Fairfax in recent months has included James Chessell, Tracy Lee and Nabila Ahmed, in addition to Stutchbury and, originally, Clegg.

However, News moles say Stevens, married to BHP Billiton media relations vice president Sam Evans, is the most significant transferee given that for 2o years he was feted inside the media giant as editor material. His column is required reading among boardroom hard heads. Ironically, it was Australian editor-in-chief Chris Mitchell who set the merry-go-round spinning when he secured the services of Clegg (then the Fin’s deputy editor), his wife Annabel Hepworth and Damon Kitney from the AFR in May 2010. Chessell and Lee had shifted in late 2009. Now it’s payback time.

“Stutch’s basically just recreating his old Oz fiefdom at Fairfax,” one former Fairfax insider told Crikey yesterday. “The Stutchbury hire has sparked a giant talent grab.” Since taking the reins of The Fin, the silver-haired crusader has taken a vicious line on industrial relations reform as foreshadowed by Crikey when his defection was announced. Nary a day goes by without Stutchbury splashing on the front page with a dig at unions or the Gillard government for stifling apparently overdue industrial relations reforms.

Now it seems the editor-in-chief could expand his domain even further, telling Lateline Business’ Ticky Fullerton on Wednesday night that a buyout of Alan Kohler’s Business Spectator would be “a very interesting thing to think about”, a comment that’s sparked much whispering in Crikey‘s Swann House corridors. And yesterday, his bullish boss Clegg moved to slash the price of The Fin’s print subscriptions by 30%, from $1140 to $780 a year. Home delivery subs will also get access to the previously-barred afr.com with a web-only subscription costing just $680, Clegg said. — Andrew Crook

An Oz sub with your sub. A Crikey reader noticed these on the counter of a Subway store yesterday — a “gold pass” for three months of access to The Australian website worth $38. (Everyone can sign up for free on a three-month trial, but perhaps News Limited believes the sandwich market is ripe for readers?) 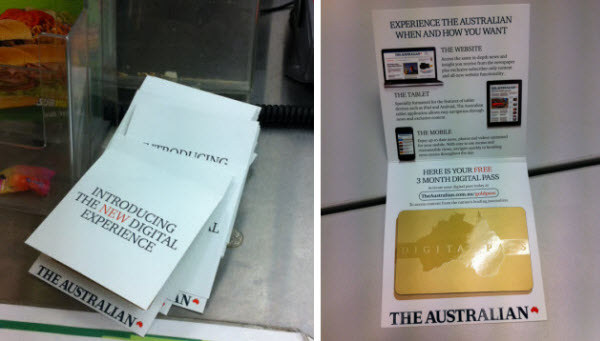 Front page of the day. The Herald Sun gets artistic in its portrayal of politicans’ pay rise: 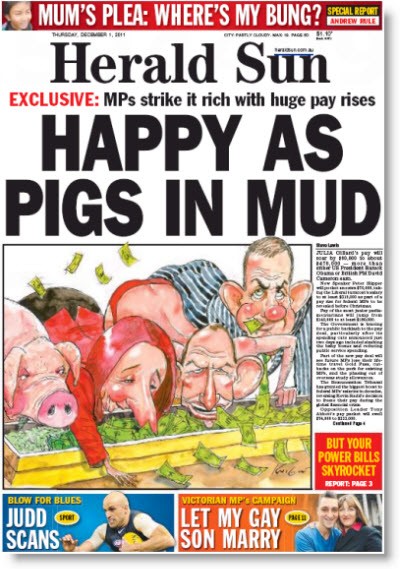 Vox pop of the day. Too much information NT News!

“London police investigating the scandal of illegal telephone hacking centred on the British arm of Rupert Murdoch’s News Corp empire said they had made another arrest on Wednesday.” — Reuters

“Pulitzer Prize–winning New York Times photographer Lynsey Addario was told she wouldn’t be made to walk through an X-ray machine, since she was seven months pregnant and worried about radiation. She was forced to walk through the machine three times before being stripped to her underwear for an additional search.” — NY Magazine

“The BBC World News channel has been blocked across Pakistan after it broadcast a documentary deemed to be critical of the country.” — journalism.co.uk

The most humiliating newspaper ever invented

“This looks like a joke, but apparently it’s real? London design shop BERG has unveiled its Little Printer, which can print, every morning, a 10-inch receipt strip of capsule news, puzzles and social network summary. Because the newspaper was not yet a sufficiently debased medium.” — Gawker

The worst book ever is Microwave for One

“In 1987, The Book Services Ltd published a slim, 144-page cookbook called Microwave for One. The book is by Sonia Allison, who has quite a few publications under her belt. But she’s best known for her masterpiece of tragedy, a book whose title and cover is so rife with sadness that one almost has the urge to brush the invisible tears from Ms. Allison’s face as she leans over her microwave and her food spread.” — PWxyz