McMullan testimony a toxic mix of nihilism, self-righteousness and victimhood

Paul McMullan's appearance before the Leveson inquiry was stomach turning testimony, but it was the best insight yet into what went so badly wrong at the heart of News International culture.

There have been some extraordinary moments in the last fortnight of the Leveson inquiry into phone hacking. There was Mrs Dowler’s unwitting recreation of her own cry when she thought that her missing daughter, rather than a News Corporation journalist, was clearing the messages on her phone — “She’s picked up her voicemails Bob! She’s alive!”

There was the moment yesterday when singer Charlotte Church recalled, aged 13, singing Pie Jesu, a funeral song, at the wedding of Rupert Murdoch and Wendi Deng — and being told that if she waived the fee, News of the World would ‘treat her well’, which suggests that Martin Scorsese is the only possible director for any film emerging from this affair.

There was even the improbable moment when Sienna Miller related how paparazzi would spit in her face to get a startled reaction for the shot, and observed that “I would often find myself, at the age of 21, at midnight, running down a dark street on my own with 10 men chasing me. And the fact they had cameras in their hands made that legal.”

But now it is clear that these and other instances were mere curtain raisers, stations along the way. Today we went deeper into the labyrinth and found the beast in its lair. His name was Paul McMullan, and he was British tabloids. A trim, craggy man, he is redolent in manner and has  the bearing of Malcolm Tucker in The Thick of It, with the addition of a strawberry mark on his cheek, his very own red top. Everyone until now has been willing, indeed eager, to appear before Leveson. McMullan wasn’t.

Three hours later, after evidence as draining for the global audience as it was for the participants, it was unclear whether McMullan’s reluctance was due to what he had done, or who he was. 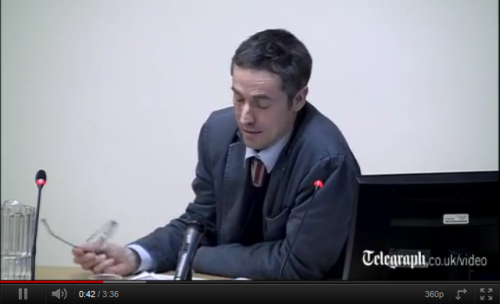 McMullan came out of the gate fast, doing exactly what was wanted from him: placing the blame squarely on Andy Coulson and Rebecca Brooks: “Andy Coulson”, McMullan said:

Brooks knew about it too, and checking journos sources was part of the paper’s standard procedure: “If I wasn’t in the office I’d play the tape [of hacked voice messages] down the phone to them.”

The practice was so widespread that journos swapped phone numbers with each other: “… I swapped Sylvester Stallone’s mother for David Beckham,” McMullan said. It was at this point, as McMullan’s responses warmed up –somewhat reassured by Leveson’s remark that he was not being asked to incriminate himself — that he began to play to the gallery. It was also when he began to fall apart.

The problem for Paul McMullan was that what he had done was neither morally defensible nor engagingly rogueish. He is notorious as the man who wrote up the story of Jennifer Elliott, the daughter of the late actor Denholm Elliott, who had become a beggar due to heroin addiction. Several years later, before she hung herself, Jennifer Elliott would cite the stories as driving her to final despair and humiliation.

That was the last part of his career, yet McMullan lacked the ability to revel in his own nihilism, shifting the conversation throughout to the allegedly positive stories he had contributed, such as undercover work busting drug gangs, every time the questions came round to the pursuit either of celebrities, or to ordinary people dealing with tragedy.

Asked about “blagging” — lying to get hospital records, etc — he managed to work in a sting on a p-dophile priest, and the time his van was torched by angry cocaine runners; asked whether he had any ethical problems with such techniques applied to the powerless or irrelevant, this former employee of the Murdochs began speaking of “catching out those who rule over us”.

Perhaps he thought he was being engagingly demotic; instead, he was cruelling any chance of respect by a display of sycophancy, the second nature of most major organisation journalists. Malcolm Tucker was gone replaced by Finchy from The Office, pissing on the audience and then sucking up to them. This came to the fore when talking about the hiring of private detectives, noting that News of the World had become dependent on the use of them, and that he had inherited the practice from Rebekah Brooks, part of an ongoing denunciation of the ‘red-headed criminal’ and Andy Coulson (“… deputy editor? should have been a junior reporter”.)But he was, overall, a bitter man, nowhere more so than during the discussion of pursuing celebs in fast cars, something he noted had been only somewhat curtailed by the death of Princess Diana. The celebs enjoyed it, he said. Undoubtedly some did, but all of them? It became obvious that he had an obsession with Sienna Miller.

“Brad Pitt had 15 paps outside his house, Sienna Miller, who’s she, someone who made a crappy movie,” he snarled, “she would have loved 15 paps.” The sheer hate served to underline Miller’s point excellently — that there was all sorts of aggression going into the practice, and that privileged, beautiful and only slightly talented women like Miller get the most of it. For all his bluster, McMullan was pathetic, the pure expression of resentment which sells the tabloids themselves — the seething class resentment, in conditions of political defeat, mitigated by selling back celebrity take-down.

That took us into the truly bizarre realm of McMullan’s thoughts on privacy. He was against. Against a privacy law? No, it seemed, against privacy. “In 21 years of invading people’s privacy I’ve never found anybody doing any good … Privacy is for paedos. Privacy is evil.” But that allowed counsel to bring him round to the final matter, his takedown of various people.

One was Jefferson King, best known for playing Shadow in the ITV show Gladiators. Not the brightest bloke — McMullan helpfully imitated his voice when recounting the conversation — he was tricked into confessing to cocaine use on tape. Did McMullan feel any remorse? The patient News Corporation moralist appeared — “no the damage that drug use does around the world is substantial”, and none of it, apparently in newsrooms.

He held his own through that but in the Jennifer Elliott matter, he lost the plot entirely. Yes he had got her details from corrupt police. Yes, he had found her begging for heroin money and offered her money for s-x — an offer she had never made herself. Yes, he had gone back to her flat and photographed her topless. Yes, he had written several stories saying that she was working as a prostitute on the basis of the encounter. Yes, she was confused enough to say he was her boyfriend on TV. “I was driven primarily to write the best story I could.” Yes, after she hung herself, he realised that “I went too far”.

Finally there was a claim he made for his own forgiveness — that he had restarted the process of the investigation by putting the Murdochs themselves, and corrupt police under investigation, work that fed into Nick Davies’ reports for The Guardian. That produced the most amazing exhange of the lot, where McMullan reflected on the Dowlers’ experience, and defended the hacking of their daughter’s phone, noting that “international people” had said how lucky the Dowlers were to have conscientious journalists on the case instead of corrupt police.

They would have been if the News of the World had put any money into investigating the crime. They didn’t, they simply harvested death-p-rn from phone messages but for McMullan “our intentions were good, our intentions were honourable. Last summer my boy went missing only for twenty minutes, but for those twenty minutes I knew how Mrs Dowler felt.”

Yes he really said that. He was invaluable, the soul of the News International attitude, the same toxic mix of nihilism, self-righteousness and victim hood the organisation expresses the world over. It was stomach-turning testimony, but it was the best insight yet into what went so badly wrong at the heart of that culture.

From the ABC story:

“In a bizarre way I felt slightly proud that I’d written something that had created a riot and got a paediatrician beaten up, or whatever was the case, due to the paedo aspect of what our readers latched on to,” he said.

“Privacy is particularly good for paedophiles, and if you keep that in mind, privacy is for paedos, fundamentally, nobody else needs it.”

News of the World? Scum of the Earth more like it.

“Here’s the plan. We get Paul to take the stand…”
“Paul?! Are you kidding?!”
“No, listen…of course he’ll make a complete dick of himself. That’s the point. He’ll be his usual self and everyone will be so revolted it’ll make the rest of us look sane by comparison.”
“I’m not sure it’ll work.”
“Trust me.”

Of course that kind of attitude could NEVER take hold down here, they’re COMPLETELY DIFFERENT organisations, it isn’t institutionalised at all.

Yet more hysterical anti-Murdoch, anti working-class, pro-elite apologia from Mr Rundle. We get it: You love celebrities and look down your nose on the pathetic working class man just trying to earn a living by bringing stories to other working class people.

God it will be nice when the revolution comes and we can finally get payback for the way proletarian culture is constantly attacked and belittled by the likes of Rundle and his ivory tower mates.