MYEFO and the twisted politics of illusion

There are illusions everywhere in Wayne Swan's MYEFO documents. In effect, the budget will still be in deficit in 2012-13, it's just that enough of it has been tacked onto this year's deficit to get it out of the red.

Yesterday’s Mid-Year Economic and Fiscal Outlook, in effect, commenced in the weeks leading up to the May 2010 budget. That was the budget in which Wayne Swan (and Kevin Rudd) declared that the government would achieve a budget surplus in 2012-13, “three years earlier than previously projected.”

At that stage, admittedly, prospects looked considerably brighter globally: there was some plausible hope that both the US and European economies would build up steam as they recovered from the impact of the global slowdown. Nonetheless, the commitment reflected the extent to which a government that had skillfully navigated the GFC and saved hundreds of thousands of jobs in doing so had allowed the economic debate to be defined by its opponents as consisting exclusively of whether the federal budget was in surplus or deficit.

That was an illusion successfully foisted on the public by an opposition desperate to tear down the government. The Coalition’s creature from the economic id, Barnaby Joyce, even claimed Australia was at risk of default, so massive was its debt. And Labor allowed it to go unchecked and, eventually, joined in, with its cast-iron commitment to surplus, come what may.

Six months out from the relevant budget, Swan claims to be on track for that surplus, albeit a pared-down, Surplus Lite. Fittingly, however, he’s achieved it with some fiscal illusions of his own. Behold the cavalcade of clichés today: three-card trick, sleight-of-hand, pea-and-thimble trick (that’s mine), cooking the books … all focussed on the fact that the surplus is achieved at the expense of this year’s deficit and a tiny surplus the following year. In effect, the budget will still be in deficit in 2012-13, it’s just that enough of it has been tacked onto this year’s deficit to get it out of the red.

The other basis for Swan’s commitment to surplus, one that didn’t exist back in May 2010 but which has grown into a significant issue as the European crisis has unfolded and the US has struggled with its deficit problems, is retaining the confidence of financial markets. Swan’s commitment is intended to provide reassurance to the markets and ratings agencies that, at a time when sovereign credit ratings are under more pressure than ever, Australia stands in marked contrast to even the biggest developed economies.

Those who, like Tony Abbott, might think that revenue downgrades are entirely the fault of Swan rather than external circumstances might care to look at the UK, where overnight Tory chancellor George Osborne revealed a huge deterioration in growth and revenue would force the UK government to borrow an extra £113 billion.

The illusory nature of the surplus isn’t a problem for markets. If there’s a lesson from the Eurozone crisis — well, there are dozens of them, but still — it’s that financial markets will seize on any glimmer of hope, no matter how implausible, when times are bad.

The irony of all that is that Swan had accomplished his mission on that front even before he released the MYEFO documents, with Fitch’s announcing it was upgrading Australia’s credit rating to AAA yesterday morning. Not bad for the day the government announces a huge blowout in its budget deficit. Someone suggested Peter Costello would be apoplectic, but what about Paul Keating, who in 1986 had both Moody’s and Standard and Poor’s downgrade Australia (ex-band manager Keating mocked Moody’s by singing “I got the moody blues” at his press conference)?

The only significance of yesterday’s statement is whether the fairly minimal $11+ billion worth of savings are “quality cuts”. It’s a mixed bag. The additional “efficiency dividend” imposed on the public service is supposed to come from cuts to consultants, advertising, travel and training. The chief driver of consultancy and advertising costs are ministers themselves, so as long as they’ve signed up to having less money to spend, that’s fine. How much fat is available in travel and training remains to be seen.

I never worked in a public service department that came close to spending its training budget, but I reckon a lot of bureaucrats would be perfectly happy to travel less, provided their ministers don’t have a problem with less consultation with industry and other governments. But reversing the cut in HECS fees for maths and science — ostensibly because it has failed to achieve the anticipated boost in enrolments — looks plain short-sighted.

Some “quality cuts”, however, are there: the rort of the living-away-from-home allowance should never have been allowed to develop. And the cut to the baby bonus is long overdue, despite the drivel from the likes of the wretched Gemma Jones at Australia’s least-trusted newspaper, The Daily Telegraph. 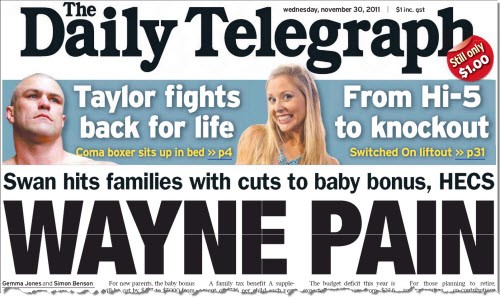 Paid parental leave has already replaced the baby bonus for many parents and it’s time it was dumped altogether. It was established by Peter Costello to buy votes and boost Australia’s fertility rate, and it has had no impact on fertility, which is now falling again.

The cut is another tiny chip away at middle class welfare. It’d be better if this government had the guts to really take the knife to the largesse taxpayers provide to middle-income earners, but in lieu of that, such cuts will have to suffice.

Swan’s MYEFO tricks to be overshadowed by EU?

Morrison can run but can’t hide from S&P

I must say I agree with the 457 Visa cutback that Swan announced. Pity they only starts in 7 months

It seems that all income contingent loan schemes may have this desirable characteristic of not deterring higher education students. The English scheme is not as well designed as Australia’s, particularly with the changes that take effect next year. Nonetheless, a tripling of fees for 2012 does not seem to have reduced student demand below 2010. (Student demand was inflated in 2011 by many students enrolling before the fee increases took effect in 2012.)

I guess, Bernard, if the economic crap really hits the fan, in the months ahead, in Europe and elsewhere, then Wayne Swan will have the luxury of cover to make the more swingeing cuts to Middle Class Rorts, er, Welfare, that you desire.
I must say, that I am waiting with baited breath for the report into one of Howard & Costello’s biggest filips to their base, the SES by postcode, Private School student subsidies report, to be finalised and acted upon by this government. So much money to so few who deserve it, I have never seen before in my life. I hope Peter Garrett and the government have the guts to correct this massively skewed situation. Hardly anyone who sends their children to a Private School votes Labor anyway, so I can’t see how their vote could get worse because of it, and, as you say, they may gain some respect for tackling the pork barrell.
So, basically, it’s the next full Budget which Wayne Swan should show some intestinal fortitude over and bring the Budget back to Surplus, without the pea-and-thimble tricks, and with some real egalitarian Labor policy.

I’m extremely sceptical that Labor will cut its subsidy of private schools much: recall the condemnation of Latham when he suggested that might be desirable.

It seems that all income contingent loan schemes may have this desirable characteristic of not deterring higher education students. The English scheme is not as well designed as Australia’s, particularly with the changes that take effect next year. Nonetheless, a tripling of fees for 2012 does not seem to have reduced student demand below 2010. (Student demand was inflated in 2011 by many students enrolling before the fee increases took effect in 2012.)