Brilliant tabloid work by The Daily Telegraph. Plus, JK Rowling tells of press attention's impact on children, James Murdoch departures "may herald his exit from papers" and other media news.

Front page of the day. Brilliant tabloid work by The Daily Telegraph: 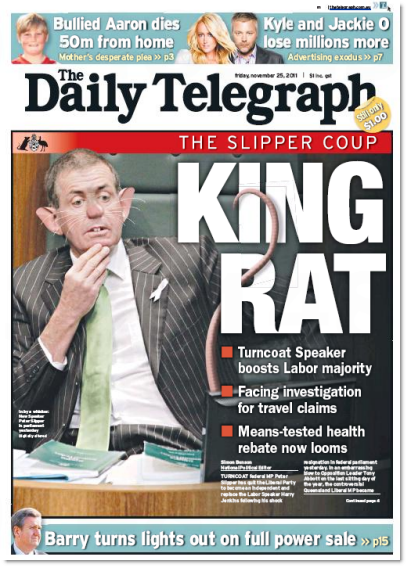 Murdoch departures ‘may herald his exit from papers’

“James Murdoch has dramatically quit as director of the companies that publish the Sun, The Times and the Sunday Times and analysts said he could soon sever all ties with the troubled newspaper group.” — London Evening Standard

Staffer turns against Sandilands as banned brands go to air

“The prominent US-Egyptian journalist Mona Eltahawy has described a brutal s-xual and physical assault that she says she suffered after being arrested by Egyptian riot police during a 12-hour ordeal inside Cairo’s interior ministry.” — The Guardian

“The gas and petroleum industry’s peak body has lashed the ABC for publishing an information website on coal-seam gas mining ‘riddled with factual errors’.” — The Australian

“New York Times media reporter and blogger Brian Stelter spoke about his experience as a young reporter at the Times, a company that is symbolic of old media. He argued that one must earn the right to teach and learn the way a company operates before you start making changes. After spending his time learning.” — Mashable

From 'Enemies of the state' to 'Dan-made disaster', the News Corp tabloids are suspiciously selective in their COVID-19 targets...

The Daily Telegraph has fallen foul of the Australian Press Council (again), the former editor of The Sydney Morning Herald has been hacked, plus more of the latest tips and murmurs from the Crikey bunker.