The violent reaction to Occupy protests isn't just generating coverage, but illustrating the claims of the movement.

It’s the casualness of it, the apparent insouciance of the act, that catches attention the most. University of California policeman John Pike strolls in front of a group of seated Occupy protestors and bombards them with pepper spray like he’s using insecticide. The casualness, and the contrast — between the heavily-equipped, helmeted officer and his passive targets. In a few seconds, Pike earned himself the sort of international notoriety reserved for southern sheriffs from the 1960s, another victim of the reversal of the panopticon, in which law enforcement are now the subject of ever-increasing surveillance, especially as protests are attended by a bank of cameras, phones and the occasional iPad recording everything.

It also replaced as an iconic image that of Dorli Rainey, who the previous night had, if only temporarily, provided the compelling image of the protests after she was pepper-sprayed by police in Seattle. They were only the latest of a series of incidents involving police-on-protester attacks during Occupy protests, the most notorious being the Oakland shooting with a “non-lethal weapon” of Scott Olsen that put the Iraq veteran into a coma.

The police tactics had their counterpart here with the violent eviction of Melbourne protesters on October 21. In all cases, police tactics appear designed around responding to violent riots, rather than peaceful protest or passive resistance. But as Pike — since placed on leave-with-pay — may now understand, that has the potential to generate the sorts of appalling contrasts for which he will forever be associated.

There’s some important context here, of course: protests in Tahrir Square in Cairo over the last 40 hours have now left at least five, and probably more, dead (there are currently reports of up to 27 fatalities). There’s a tendency to glib equation of the Occupy protests with the Arab Spring, which overlooks not merely that the reaction of law enforcement to the protests in western countries hasn’t yet yielded a body count, but that even non-violent protesters in less dangerous Middle Eastern countries often risk their lives.

For a movement that has been persistently criticised for failing to articulate any sort of positive agenda, however, the images of police overreaction are enormously beneficial, not merely for cynical reason that they generate media coverage, but because they provide an effective illustration of what the movement is complaining about, a visual counterpart to the cut-through “1%” slogan.

While the movement’s complaints — the debauching of democratic government by corporate interests, the economic double standards of the latter, the skewing of capitalism against the interests of most of the community — are hard to articulate in detail, the overreaction of law enforcement encapsulates the basic notion that the governmental apparatus is hostile to even passive forms of dissent and dismissive of basic rights.

This is enhanced by the reaction of authorities in the aftermath of violent police crackdowns. While Seattle mayor Mike McGinn immediately apologised to Rainey, he was atypical of authorities, who have either had to reluctantly support police despite obvious misgivings about their behaviour, or have resorted to peculiar reasoning to justify actions against protesters. New York mayor Michael Bloomberg justified clearing Zucotti Park on “health and safety” grounds. Melbourne mayor Robert Doyle had a bizarre interview with Jon Faine in which Doyle dismissed the need for any independent inquiry into the violence inflicted on Occupy Melbourne protesters, or even that anything untoward may have occurred. Oakland mayor and former activist Jean Quan has tried to blame “anarchists” for violence in the crackdown in that city. They’ve been supported by some law and order commentators. “It is truly not excessive and I am surprised by how not excessive it is,” said one New York policing academic in the aftermath of violent crackdowns in the US.

Not excessive in a Middle Eastern context, true.

The result is a stream of images, accompanied by a stream of rhetoric, that appears to confirm exactly what the movement is saying: that governments now instinctively lash out at dissent and rely heavily on spin to protect themselves. It reinforces the cynicism of voters who have become all too aware of the credibility gap in western societies between the carefully-prepared talking points of government (and corporate) leaders and reality.

The problem isn’t so much John Pike, an employee who will bear the brunt of the reaction against law enforcement tactics, as the lack of faith voters have in authorities and the way those in authority so frequently give them good reason for that lack of faith.

The photo of the students being sprayed on the Crikey homepage comes from Brad Ngyuen, a photographer for the university newspaper.

What are the laws around occupying? 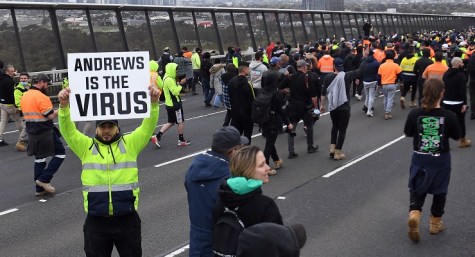 Were the Melbourne protesters lawless unionists or brave freedom fighters?

Occupy’s big no was a big yes to something else

The only way these images could be more demonstrative of authority’s attitude towards the ordinary person is if he’d undone his fly and urinated on the protesters. If a picture paints a thousand words, then some of those words in this case might be “you are nothing but cockroaches”, “this is what we in authority think of you scum” and “this is how we treat anyone who dares express a contrary opinion in the land of the free”. Nice one Officer Pike. Every cop who ever gets spat on and called a pig from now on can thank you.

So now the Occupy movement is about police brutality? And one policeman (who is only a campus cop, I would like to see the training and screening process for that job compared with other police forces) speaks for the actions of police globally? Did Rodney King’s beating represent the attitudes of the Victorian police? And wouldn’t the average cop be part of the 99% not the 1%?

Even if the police’s attitudes are demonstrative of why the occupy movement is protesting it once again shows why the Australian versions struggle for relevance, in the US we have a man being shot and put into a coma, an old lady and university students being callously pepper sprayed and what do we have in Australia?

And just last week Obama was celebrating the land of the free.

Jimmy – sadly for the police, the whole force is judged by the weakest link. That was our unoffical motto in NSW Ambulance service (I am going back a long time here) – we use to say that the public will judge all of us, on the basis of watching one incompetent ambulance office bungle someone’s injury. And so we determined to be as good as we could, and never let ourself be that “weakest link”.

The paid police in Victoria belong to the 99% like the rest of the 99% of us.

Reality check: just as there is a big difference in the way the authorities treat peaceful protests in modern western democracies, compared to elsewhere (like the middle east), there is also a reality check about the 99%! There are actually some big graduations within that 99%. For example, most Australians are in the top 15% of that 99%.

eg: about 20% of the world’s people are actively engaged in consuming – non-stop buying stuff. The newest, the latest, the best… Then about 30% are living quite poorly servicing that 20%. The other 50% are living ridiculously poorly and get the left overs or nothing. (I was shocked to hear a related statistic that helps illustrate this: Over 62% of all humans alive right now, have never made a phone call.)

Dont get me wrong here: I support the call to limit ridiculous CEO wage packages, and the power of corporations over elected govts. Absolutely. But I dont want to pretend that just because I am a middle class Aussie, I am somehow badly off.

Jim I completely agree with your characterisation of the 99% and the majority of Australians place in it.

However I would go further and say that “the power of corporations over elected govts” does not exist as much here as in the US or much poorer nations.

The occupy movement was born out of something real in the US but for Australia to try and adopt it just doesn’t gel with reality.