US Congress, at the behest of the copyright industry, is set to impose the most draconian anti-filesharing régime yet.

After twelve months of clashes between internet activists, governments and corporations desperate to impose controls on the flow of information, 2011 looks set to end with the biggest online fight yet, over Hollywood’s attempts to stop filesharing.

In October the draconian anti-filesharing bill known as the PROTECTIP Act, currently before the US Senate, was joined by a new bill, the Stop Online Privacy Act bill, before the House of Representatives. Hearings into the SOPA bill were held this week in Washington. The bills significantly strengthen the legislative framework aimed at halting the remorseless growth in filesharing.

Despite previous attempt to prohibit filesharing, and the copyright industry’s attempt to outsource the pursuit of consumers to ISPs and ambulance-chasing lawyers, filesharing traffic is forecast to keep rising steadily. Cisco’s most recent figures suggest that while filesharing is no longer the biggest single source of internet traffic, it will accelerate in coming years. 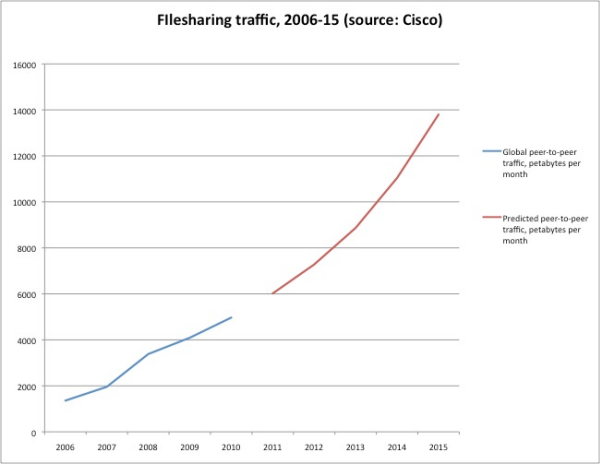 Rather than heed the lesson of digital native Apple, which has found a way to earn revenue from providing content in more flexible and consumer-friendly forms, the copyright industry has instead ramped up its war on the internet by lobbying heavily — particularly by exploiting links between Hollywood and the Democrats — for a new approach to prohibition involving wide-scale internet censorship. Under the proposed legislative framework,

Remarkably, the attack on anti-censorship software directly contradicts the Obama Administration’s investment of tens of millions of dollars in support for online freedom initiatives, including anti-censorship and anonymisation software, and creates the possibility of software developed and supported with US Government funds could be banned within the United States.

And as we know, the bills are in addition to efforts to impose US-style copyright laws on countries such as Australia via trade treaties like the heavily-hyped Trans-Pacific Partnership.

While the bills have infuriated net freedom activists, they’ve also attracted intense criticism both from major internet companies and cyber security experts. Google, Facebook, LinkedIn, Twitter and eBay wrote earlier this week to Congress supporting the goals of the bills but condemning their approach.

“Unfortunately, the bills as drafted would expose law-abiding U.S. Internet and technology companies to new uncertain liabilities, private rights of action, and technology mandates that would require monitoring of web sites. We are concerned that these measures pose a serious risk to our industry’s continued track record of innovation and job-creation, as well as to our Nation’s cybersecurity. We cannot support these bills as written and ask that you consider more targeted ways to combat foreign “rogue” websites dedicated to copyright infringement and trademark counterfeiting, while preserving the innovation and dynamism that has made the Internet such an important driver of economic growth and job creation.”

A Congressional committee hearing this week was stacked with copyright industry representatives but a simultaneous hearing by the Homeland Security subcommittee heard concerns from its chairman that the bill would undermine efforts to improve domain name security. A US government agency, Sandia National Laboratories, also warned the bill would “negatively impact U.S. and global cybersecurity and Internet functionality.”

And as a number of critics have pointed out, evading a DNS blacklist can be as simple as using numerical internet addresses, and recent domain seizures by the US Government have failed to dent traffic to blacklisted servers. As several researchers put it, “users and infringing websites do not simply ‘give up’ in response to implementation of a filtering mechanism. They go online, find new (non-American) domains or direct IP numbers, and connect as they usually would.”

The bills serve as an effective symbol of how little the copyright industry has moved from its original response to filesharing in the late 1990s. The only substantial change in its approach has been to successfully impose on taxpayers and ISPs an ever-greater share of the costs of copyright enforcement, as it demands ever-more draconian legislation. But under SOPA and PROTECIP, the collateral damage from this approach would extend beyond ISPs and start damaging other major online service providers and undermine the operational effectiveness of the internet, all without any guarantee it would have a significant impact on filesharing.

The issue then becomes — when the SOPA/PROTECTIP régime is proven ineffective, what’s the copyright industry’s next step? Beyond this, there’s only population-wide internet surveillance. And there are plenty of governments who would be amenable to that if they could get away with it.

“Rather than heed the lesson of digital native Apple, which has found a way to earn revenue from providing content in more flexible and consumer-friendly forms, the copyright industry has instead ramped up its war on the internet..”

For instance, True Blood series 4 aired in the US 5 weeks before it was legally available for purchase on iTunes. I was ready and willing to pay, but by making me wait, I ended up downloading it for free. Comedy series Drag Race is not available to purchase by any means in Australia, but thanks to Torrents, I’ve viewed all 3 series (again for free). In both cases my credit card was ready to be used, and nobody wanted to take my money!

iTunes has proved people are willing to pay. They just aren’t willing to wait OR be told what devices they can/cant view the material on. And arguably the success of iTunes has come despite the fact it is overpriced, so that proves people are even happy to pay a premium for immediate, multi-platform material. The copyright holders just need to be ready to make the sale on the consumer’s terms!

Very true Scotty, I’m in thye same boat and spookily downed the same shows as you.
Me and my partner have often said we’d pay to watch the shows but that option has been unavialable to us, so we downed them for nought. As Stealer Wheel tell it ” Clowns to the left of me
Jokers to the right”.. here I am downloading away…

Other than being from different sides of the labour-capital divide, is there any real difference between the real and mythical Luddites of old and the modern copyright industry?