Could the US stockpile and transit banned cluster bombs in Darwin?

A US military “base” in Darwin will necessitate foreign weapons systems and armaments being stockpiled, retained and transited on and in Australian territory (spun as a “rotational deployment” — for China?). I’ll use base until I know better. Long-standing and committed allies Australia and the United States hold different positions on many matters relating to both arms […]

A US military “base” in Darwin will necessitate foreign weapons systems and armaments being stockpiled, retained and transited on and in Australian territory (spun as a “rotational deployment” — for China?). I’ll use base until I know better.

Long-standing and committed allies Australia and the United States hold different positions on many matters relating to both arms control and humanitarian law. One recent normative development where the US and Australia’s views have diverged is the ban on cluster bombs, a weapon that has inside multiple — often hundreds — of small explosive sub-munitions or “bomblets” that are dispersed over an area the size of several football fields from either the air or ground.

As a result, the final location of each bomblet is impossible to control for those deploying them, and so whom they maim or kill is both unknown and indiscriminate. Roughly 30% of those deployed “fail” to explode on impact and so the unexploded bomblets become de facto landmines.

When the Convention on Cluster Munitions came into effect in August last year, the Gillard government was part of a chorus of NGOs and governments that saw “an end for all time” of the use of cluster munitions by prohibiting their production, use, stockpiling and transfer. At present a bill sits with the Senate that will criminalise Australian deployment of the weapon under domestic law, thereby ratifying the international convention.

With the formation of a US military base in Darwin, Gillard will effectively make use of certain “loopholes” in the legislation that arise from America’s non-signatory status to the Convention, and obfuscation of negotiations that are currently taking place for an additional arms control measure this week. Best estimates are that the US forces presently have a quarter of the world’s four billion in stockpiles across both its territory and existing overseas bases. Though the US last deployed cluster munitions during the Iraq War in 2003 despite it not being bound by the emerging norm.

In my view, there’s a fair degree of probability cluster munitions will be stockpiled in Darwin since there are known plans for the US to base a number of B-52 bombers historically used to deploy cluster bombs. It is already known that nuclear weapons will not be permitted onto Australian territory, but a number of the US’ naval fleet are nuclear-powered vessels which will be allowed.

Curiously there have been no statements from the Gillard government as to whether the Darwin deal will result in US cluster munitions being transited and stockpiled in Darwin, despite widely debated concerns over the Bill.

For instance, writing to the Senate Committee responsible for a detailed review of the draft legislation in a letter dated March 16, I warned that the current wording provided: “Australia’s military allies that are not party to the convention unfettered access to stockpile, retain and transit cluster munitions within Australia.”

Specifically, the Bill provides a blanket exemption for the stockpiling and transit of cluster munitions on or in Australian territory by foreign forces. Where this is provided — section 72.42 — severely contravenes article 9 of the international convention, which requires states parties to criminalise all prohibited activities (including stockpiling and transfer) on their territory, and to also refrain from assisting non-signatory states from doing so.

Both acts would result in Australia violating the spirit and intent of the Convention — to eliminate cluster munitions and the harm they cause for all time. And both are likely to occur as a result of the US base in Darwin.

Speaking at the Senate Committee hearing on cluster munitions in March this year, Greens Senator Scott Ludlam probed this military interoperability loopholes most expertly with then Lieutenant General David Hurley, then vice chief of the defence force:

Senator LUDLAM: If I one day got a security clearance to go and visit Stirling, Fleet Base West, would I find some secret stockpile of United States cluster munitions that they can sweep by and pick up? To cut to the chase: are we stockpiling these materials on behalf of anybody else?

Lt Gen. Hurley: We are not stockpiling cluster munitions on behalf of anybody.

Senator LUDLAM: Okay. Do they get transhipped through Australian airspace or over land?

Lt Gen. Hurley: If US forces are transiting Australian airspace or sea passage there is a possibility they will have them on board, yes.

Senator LUDLAM: Would Defence be brought into the conversation as a result of negotiations that kicked off late last year between us and the US government on an expanded US military presence here? How would the general public know if cluster munitions were to be brought onto Australian soil?

Lt Gen. Hurley: There are a couple of hypotheticals in that. We are in very early stages of the force posture review discussions with United States armed forces. The nature and characteristics of the outcome of those discussions are really hard to tell at the present time, and whether that would involve any stockpiling of US explosive ordnance in Australia would be a decision far down the track. I think that would be a policy decision government would make and it would determine how it would advise the population.

At the time Lieutenant General Hurley made these statements (he is now “chief”), it is clear he foresaw the strong possibility of foreign forces such as the US stockpiling cluster munitions in or on Australian territory, as well as subsequent demands for some form of public disclosure and accountability for the defence forces and/or federal government.

Any loophole analysts found in the Bill, then, were deliberate.

Gillard’s about to bomb out where Rudd didn’t

Church campaign gets a win: ANZ turns its back on cluster bombs 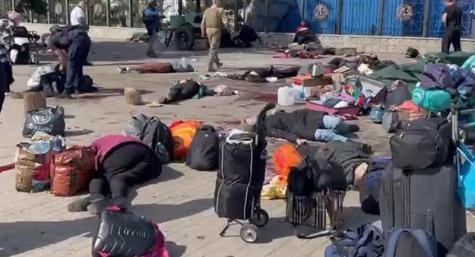