Why Eddie championed Lil' Wayne .... UK "celebrities" attacked by rabid koala in Oz ... Front Page of the Day. ...The Department of Corrections ... Peter Roebuck, we hardly knew you and more ...

Why Eddie championed Lil’ Wayne. Nice to see Eddie “no conflict” McGuire popping up on page 3 of yesterday’s Sunday Herald Sun to assist US rapper Lil’ Wayne with a visa application for his imminent Australian tour. Eddie, it seemed, had written to promoter Paul Dainty to plead Wayne’s case with Immigration. And McGuire’s Collingwood Football Club had also bizarrely pitched in with a proposal to rope Lil’ Weezy — jailed last year on gun charges — into a local “Knives Scar Lives” education campaign. (What could he teach them other than not to bring guns to a knife fight?)

A key fact the paper neglected to mention is that McGuire and Dainty are directors of Twenty3 Group, the company managing the marketing and promotion of the stadium tour headlined by Eminem. Dainty is the promoter of Lil Wayne’s solo shows at not insubstantial venues like Rod Laver Arena. Tickets for the sideshows are, unsurprisingly, still available but are sure to get a kick-along from yesterday’s prime publicity. — Andrew Crook 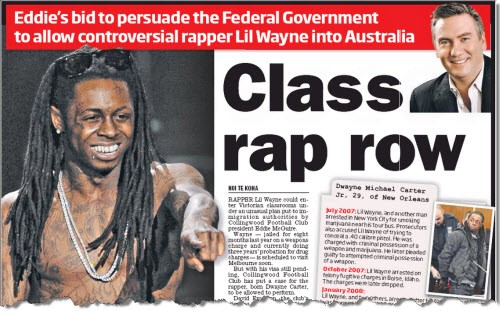 UK ‘celebs’ attacked by rabid koala. UK tabloid Sunday Sport has an interesting “story” on how a rabid koala is terrorising the cast of UK I’m a Celebrity… Get Me Out of Here: 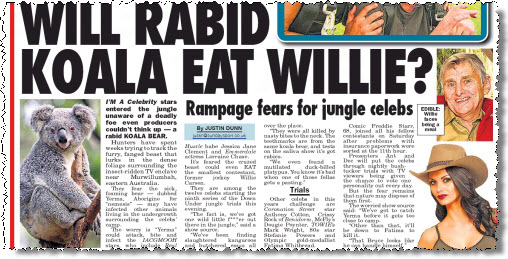 Front page of the day. The only thing more dangerous than a rampaging, rabid koala, is a rampaging, naked, drunk, angry Kiwi: 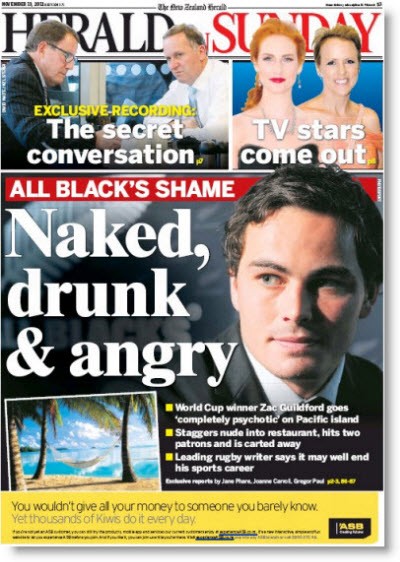 The Department of Corrections. Yesterday’s Sunday Herald Sun corrected a story from the previous week that reported, remarkably, the late Kerry Packer had played a game of golf with Tiger Woods … 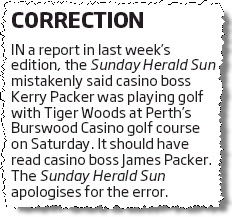 ‘The Bard of Summer’: Peter, we hardly knew you

“Tragedy far greater than 47 all out has struck cricket, and this should be a Roebuck column. But it isn’t one, and can’t be one, and never will be one again because the tragedy is Peter Roebuck. He is dead.” — Sydney Morning Herald

“It has been one of Newsweek’s signature ventures and a staple of American political journalism since 1984. Every presidential election season, the magazine detached a small group of reporters from their daily jobs for a year to travel with the presidential candidates and document their every internal triumph and despair — all under the condition that none of it was to be printed until after the election. But the ambitious undertaking, known inside the magazine simply as ‘the project,’ is no more.” — New York Times

“By 4am Domingos, a veteran news cameraman and Alves, a TV crime reporter, had clocked in at their newsroom. By 5am they were racing out of town behind a column of flashing red sirens. t 7.40am that morning Domingos was bundled into a local health clinic and declared dead on arrival. Alves slumped against a redbrick wall and wept.” — The Guardian

“Producers from around the country will gather today for the annual conference by the Screen Producers Association of Australia.” — TV Tonight

Who should join Kochie on Sunrise? We have a few ideas

Just as long as the Poms keep being afraid of the dreaded drop bears.