Dolly was busting out. Her bus was too big, our roads were too small, her tour was at risk of deflating. Now Parton will meet the man who made it happen -- transport minister Anthony Albanese, writes Harrison Polites.

Dolly was busting out. Her bus was too big, our roads were too small. An Australian tour for the country music megastar was at risk of deflating.

Step up Labor hard man Anthony Albanese. Pesky road regulations weren’t going to stop Dolly Parton’s trip Down Under. He made some calls. He twisted some arms. He came to the rescue.

And after the damsel no longer in distress said yesterday she would “smear lip gloss all over” her hero, Crikey can exclusively reveal the diplomatic negotiations that next week will bring the smitten pair together. When Dolly meets Albo.

So was it the chance of a shimmery smooch that had Albanese rearranging his schedule for a private audience with Parton? “Not at all,” the transport minister told us today, insisting he just wanted to thank the veteran diva for all the praise.

“She has been overgenerous with her offers of thanks,” he told Crikey this morning, also on the open road heading to an engagement in Wollongong, perhaps with Country Road on the stereo, more than happy to chat about his brush with music fame.

Dolly, not surprisingly, prefers the road to the skies, shipping two buses to Australia — at a reported cost of $1 million each — to travel between her 12 concert gigs across the country, to Perth and Adelaide and up and down the east coast.

“She doesn’t tour without her buses,” Albanese said, explaining the desperation of the situation and why he had to intervene.

But these are not your standard road-going buses — at 14 metres long, the luxuriously fitted-out travelling homes breach Australian road laws. “They were too long, too wide and too heavy,” Albanese said. A road regulator’s nightmare.

(We think this is one of the Dolly Express buses)

So Albo went to work. He says gaining an exemption to state laws did require some political power. He worked 9 to 5 to pass the exemption through the transport departments of all the states to which Parton was travelling.

(Never missing a political opportunity, Albanese told us the potentially embarrassing international incident was “another argument for national transport regulation”. States and territories have differing road regulations, meaning Albanese had to lobby individual state agencies for clearance; after a decades-long fight the states have agreed with the Commonwealth to implement national transport regulations from 2013.)

When Parton arrived in Australia she had the minister in her sights. She told a press conference yesterday: “He was so good to make sure that I got my buses here; I hear there was quite a bit of press about that. So I don’t know if he’s here today, if he is, if he’ll come up here and I’ll smear lip gloss all over him.”

He wasn’t, but next Tuesday the pair will meet after Dolly extended an invitation. Albanese seems a little star-struck about the encounter.

“She asked to meet me,” he exclaimed this morning. “She’s an icon … a legend of the entertainment industry … and a goodwill ambassador for Australia.”

And he isn’t sharing the opportunity with any of his cabinet colleagues. Not even the Prime Minister.

Known as the queen of country music, with her own US theme park to boot, Parton’s career has spanned five decades to compile a catalogue of some 3000 songs. She hasn’t toured Australia for 25 years — thanks to Albo she might be back sooner than that.

Is Albo a genius or a fool? 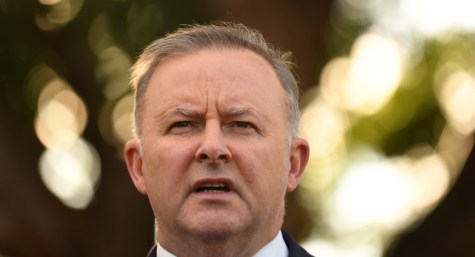 Well done, Albo.
You’re a champion.
Sophie Mirabella must be fuming.
She can’t recognise real class when she encounters it.

One of the greatest political achievements in Australian history.

Next up for Albo: Israel and Palestine.

Lucky Dr. No is not in the country.