"The door is closing...I am very worried – if we don't change direction now on how we use energy, we will end up beyond what scientists tell us is the minimum [for safety]. The door will be closed forever."

“The door is closing … I am very worried — if we don’t change direction now on how we use energy, we will end up beyond what scientists tell us is the minimum [for safety]. The door will be closed forever.”

That’s Fatih Birol, chief economist at the International Energy Agency, upon the release this week of the IEA’s World Energy Outlook 2011 report. According to the report, the world is likely to build so many fossil-fuelled power stations, inefficient buildings and energy-hungry factories in the next five years that it will become impossible to hold global warming to safe levels.

If current trends continue then by 2015 at least 90% of the available “carbon budget” will be swallowed up by our energy and industrial infrastructure. By 2017, there will be no room to move at all — the whole of the carbon budget will be spoken for, according to the IEA’s calculations.

Throw to the graphs. Our energy demand: 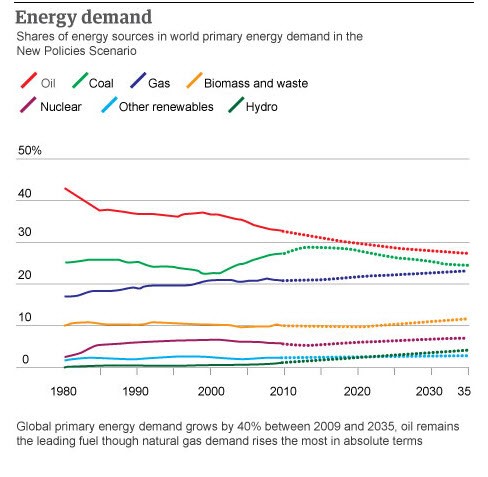 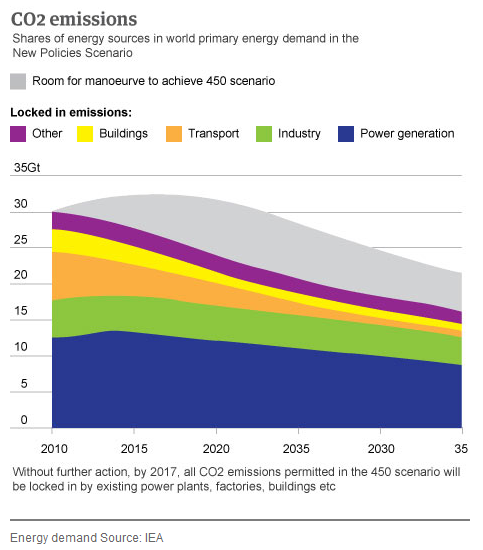 “Everybody knows that what we need in Australia is to advance a renewable energy revolution. We need to get 100% renewable energy as quickly as possible in this country. Not only will that be a great thing for reducing greenhouse gas emissions and seriously addressing the climate crisis but it is a recipe for sophistication in the Australian economy, greater diversity and a rollout of investment in the bush in particular. It will mean new jobs. As we have just heard in the debate on the steel transformation plan, it is where Australian steel needs to be directed. It is needed to build the towers for the wind turbines and the support for the solar arrays. Solar thermal needs steel; renewable energy needs steel. The advancement of renewables has so many advantages for Australia in terms of our future economy, our jobs growth and our whole manufacturing mix.”

“It is time the Greens stopped deliberately misleading the Australian public with their claims that Australia can move to 100% renewable energy within a decade … They are living in fantasy land if they think this can be achieved … The simple fact is that renewable energy is currently more expensive than other energy sources … We must be realistic about what can be achieved and over what timeframe.”

Someone might want to put a rocket under the minister … a wind powered one, that is.

Someone might want to put a rocket under the Crikey editorial writer. A nuclear powered one, that is. Ferguson is much more correct than Milne on this issue, as even just the graph above hints. 100% renewable energy plans for Australia are multi-trillion dollar recipes for failure.

With their disgraceful and completely unjustified insistence that nuclear energy be excluded from international carbon credit calculations under the new legislation, the Greens are even more part of the climate problem than Ferguson.

I plead with anyone whose mind is not closed on this issue to get over to bravenewclimate.com and get educated. Almost anywhere will do, but try bravenewclimate.com/2011/11/06/depressing-climate-trends/ (especially the comment stream) for a recent example.

If Australia is to move to 100% renewables energy supply, we must install storage with a capacity of our entire energy supply for about a week of unreliable weather. Storage of even the very smallest fraction of that capacity would cost an exorbitant sum. Just ask the Minister.

By the way, the climatic crisis is nothing to do with renewables or non-renewables, it is to replace carbon-energy with non-carbon-energy. If we really are serious about doing that, we must repeal the federal legislation against nuclear. How to do that? Just ask the Senator.

Do you want to insult the intelligence of the Crikey readership? Just ask the editor.

100% renewable energy has already been tested and shown to work. Number of failures (ie blackouts) for this project so far: 0.
http://www.kombikraftwerk.de/index.php?id=27

The only way to reconcile the climate crisis with our current way of living is nuclear power.

If you think there’s another solution (apart from another way of living) you’re engaged in wishful thinking.

“A SCIENTIFIC movement to promote thorium as a nuclear fuel, due
to its abundance and improved safety, is developing around the
world and Australia could lead the way.
The Sydney scientist Reza Hashemi-Nezhad has argued for more than
a decade for the benefits of thorium when used in an
accelerator-driven nuclear reactor that operates at subcritical
conditions.
You cannot have an accident similar to Chernobyl,
Dr Hashemi-Nezhad, the director of the Institute of Nuclear
Science at the University of Sydney, said. It does not produce
weapon-grade materials. And the nuclear waste is much less toxic
than from a standard reactor.
With the world’s largest reserves of the radioactive mineral, Australia
could be a leader in developing and adopting the technology.
It is completely proven and feasible, Dr Hashemi-Nezhad said. The
only thing required here is government acceptance.”
Perhaps and hopefully the minister has his feet firmly planted on the
ground and will support Reza’s call – in preference to having our heads
in the clouds (or some other inappropriate place).