Things can only get better

The labour force figures out from the Australian Bureau of Statistics this morning at least tell us that things are not getting worse.

They really are cutting. My public service acquaintances from several departments tell me that the talk by Treasurer Wayne Swan of budget cuts this time is more than just rhetoric. Apparently some hard decisions really are being made.

Over the last year, in seasonally adjusted terms, unemployment has fallen 0.1 percentage points to give an October figure of 5.2% but before getting too excited about that note that without a drop of 0.3 points in the participation rate there would have been an increase. 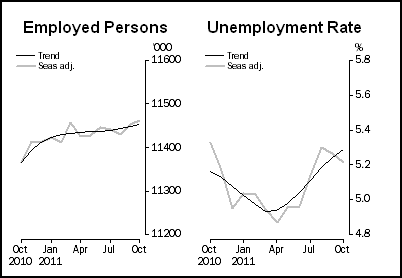 And while the October unemployment rate is lower than the upwardly revised figure for September, the trend rate is still pointing higher.

Courage by a Liberal. Surely Western Australian Liberal MP Mal Washer is not the only one of our parliamentary representatives to think that Australian troops should be fighting in Afghanistan but his is a lonely voice in actually saying so.  “It’s not a popular thing to say … you are fighting an unwinnable war,” says Mr Washer.

“I have great empathy for the people who fight and their families, and their dedication. But if I’m going to (ask them to) risk their lives, I want a damn good reason and this is not one.”

I could not agree more.

Despairing of democracy. The inability of elected politicians in Greece and Italy to even choose a new leader for their countries in the face of a real crisis is enough to make you despair of democracy.

And of deregulation too. So who has got the benefit from the deregulation whose virtues the political elites keep extolling? New York Times columnist Paul Krugman gives this comparison of the postwar boom with the alleged deregulation boom, comparing real average family income with real average income for the top 1 percent: 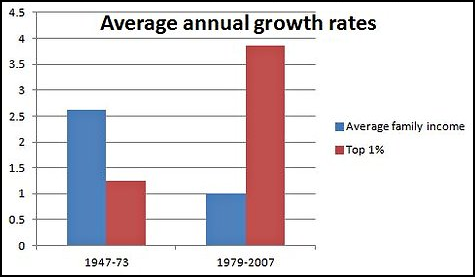 “If you’re looking at the average, the last generation is a poor shadow of the postwar boom. But if you’re talking about the 1 percent, wonderful things have happened.

No wonder then, that Very Serious People — who, after all, get to be considered Very Serious because the elite likes them — have retained faith in deregulation despite repeated disasters.”

“…Mal Washer is not the only one of our parliamentary representatives to think that Australian troops should be fighting in Afghanistan but his is a lonely voice in actually saying so.”

So he thinks that they “should be fighting”, then egures that they should not. Or is there a missing negative between should and not?