Has the Nine Network opened its chequebook for the family of the now infamous "Bali boy"? The agent and the network aren't talking, but network rivals insist it's been done.

On Sunday it was a done deal … 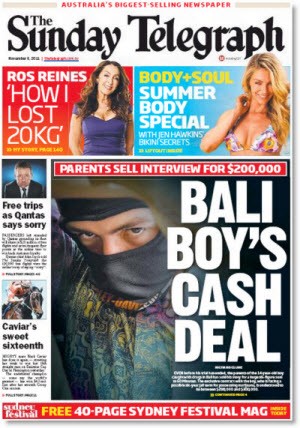 By yesterday it was all a beat-up … 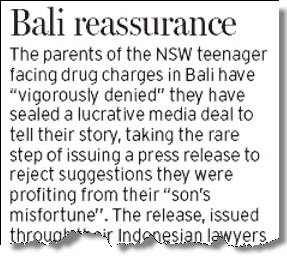 And today nobody is talking about whether the Nine Network has opened its chequebook for the family of the now infamous “Bali boy”. Except television rivals, who insist the deal has been done and cameras are set to roll once the teenager accused of marijuana possession has been judged.

Nine issued a terse “no comment” to Crikey this morning after repeated requests to clarify recent denials that a deal has been signed. But Channel Seven’s veteran news boss Peter Meakin insists the contract was signed last week.

Meakin told Crikey yesterday Seven was sounded out about a chat with the family for its Sunday Night program but refused to pay a fee given it was a criminal case. “We said we were interested but not using money,” he said.

A Seven source confirms: “That was our decision from the get-go.”

And anyway, Meakin said he couldn’t see the value in an interview before any conviction and one that couldn’t name the minor in question: “I didn’t think there was much appeal in running an interview without disclosing his identity.”

According to a source involved at one point in the negotiations, celebrity agent Grant Vandenberg approached the networks in early October, soon after the 14-year-old was arrested, with a starting price of “at least $100,000”. A joint media deal was suggested, with interviews on television and in a magazine.

The weekend reports from unnamed sources at Nine suggest a $300,000 deal, with an interview to run on 60 Minutes and Nine Entertainment Co title Women’s Day.

Vandenberg, who said yesterday a deal with Nine is yet to be signed, wasn’t returning calls this morning. The former corporate spinner and freelance agent has 2GB hot head Alan Jones and Oscar winner Russell Crowe on his books, and represented former Federal Court judge Marcus Einfeld during his legal troubles.

Parents of the NSW teenager issued a statement yesterday through the boy’s lawyers “vigorously” denying they have sealed any media deal that would profit from their “son’s misfortune”. The statement said the father is a successful businessman who ”does not need the money that has been suggested”.

One source says a deal may have unravelled after the leak to the media, when the parents realised they may not be able to keep the proceeds due to laws against profiting from crime and that it may jeopardise chances for a light sentence.

“From the Indonesian perspective, they’re no doubt thinking that they have bent over backwards — personal intercession from the Justice Minister, expedited court case, better conditions than most, etc — and, in the light of all of this, to see the boy and his family likely profiting from the crime has/will no doubt tick them off,” they suggested.

“So what might well have happened is that when the shit hit the fan on Sunday and the worst consequences became starkly apparent everyone decided to deny everything. Which, if these suspicions are true, is probably where we are now.”

Another scenario being suggested is Vandenberg struck a deal with Nine through network spinner David Hurley, who is believed to be close to the agent, without telling the family. Hurley told other media yesterday there is “categorically no deal”.

Prosecutors will recommend a sentence for the NSW teenager on Friday. He was found with 3.6 grams of cannabis and is pleading for no charges to be laid.

What a murky mess. Clearly the commercial networks have no boundaries on who they will exploit. However, it takes two to tango – lets hope the parents think again about profiting from all this (if they have in fact done a deal) – how could they do that to their child?
Certainly an interview I would not watch.

The really revolting thing about this whole sordid business is that programs like 60 Minutes hold up a mirror to society and it’s not a good look. In order to flog tampons and toothpaste, the media will prostitute itself and degrade any decency standard in order to gain the attention of the fickle consuming public.

They know that the public as voyeurs will tune in to the program in exploiting this situations and the advertising sales managers will rub their hands with glee. The situation has some parallels with the death of Princess Dianawhere reportedly advertising executives in one of our major television channels were jumping for joy at the prospect of the tripling of spot advertising rates as a consequence of the attention surrounding her death.

It will be interesting to see the outcome in view of the “weasel worded” denials from Channel 9 and representatives of the so-called “Bali boy’s” family as to what deal has actually been struck, and the extent to which all players in this sordid affair tell porkies to cover their tracks.

If I was a member of the Indonesian judiciary involved in this case I would be outraged at the prospect of a defendant subject to criminal proceedings profiting so massively from the situation of the application of Indonesian justice. This includes whole of the voyeuristic Australian media and associated political apparatchiks including both the Prime Minister and the Minister for Foreign Affairs prostituting themselves in a populist vote buying exercise. Now that the carpetbaggers have moved in I would be even more revolted.

I heard Ray Martin say on Monday night(Q&A) that there’s no deal!

I hope that this is so. Talk about using your child for monetary gain if it is true! I’d not watch it either!

If there’s any truth in it, it could jeopardise this young person’s future? I just hope he’s allowed home to Australia and is treated for any addiction he has. No doubt he’ll require counselling also. (If I was his mother, I would too! What a traumatic time – a nightmare?)

It’s amazing, the fall from sobriety of the Australian media-consuming public. There are two lumbering elephants and an ugly gorilla in the room here and we are so drunk with trough-feeding we won’t even notice, let alone mention them:
Shapelle, the Bali Nine and the Australian tabloid media.
Drug busts in Bali are celebrity news. It doesn’t matter who it is as long as it’s an Aussie. They’re all innocent, we want them back so we can exploit them and Indonesia’s interests are irrelevant. It goes straight to the tabloid extreme and no one gives a stuff.
Australia seems to be completely bamboozled by Indonesia – their Muslim religion (except Bali), their slaughterhouses, their ‘people smugglers’ and yet their strong views and standards about drug offenses on their territory. Our media participates in the scrums around Indonesian court proceedings (because they are ‘larrikins’ of course) and pretends not to understand how hypocritical and scungy it all seems.
Liz45, if you were his mother, you would probably already have been ‘counseled’ by a whirlwind of legal, financial, diplomatic and media-handling professionals. The shock, grief and scandal of your personal trauma would probably not be helped by most of the ‘advice’. These guys have no standards and mostly, neither does their audience. It’s simply entertainment, on TV. This is how it’s done and we all know it. Why are we shocked?

I want to see the Murdoch/9/daily telegraph treatment of this.
“Government refuses to legalise grass. Kid forced to buy overseas”
“Hell hole baits and traps unsuspecting innocent addict”
“I was used as a political pawn”
“Parents of addict blame government. Again”,