The end of the Media Watch season in particular is close to a scandal, a mega public broadcaster fail.

Every year the ABC’s Media Watch — together with Four Corners, Foreign Correspondent, Q&A and a host of other shows — retires in early November for the summer, not to be seen again until February. It is always a shame.

And it is about funding, pure and simple. The rest of us are still at work and yet to enter the summer daze, yet the ABC’s key current affairs programs seem to adhere to the academic teaching year, rather than that of the rest of the working and political world.

But this year, the end of the Media Watch season in particular is close to a scandal, a mega public broadcaster fail.

Last night was the final Media Watch for the year, yet today sees the beginning of the public hearings of the federal government’s media inquiry — surely one of the most important events in journalism for years.

By the time Media Watch returns, the inquiry will be finalising its report. All over, done and almost dusted without a single acerbic comment from Jonathan Holmes. Or not on the airwaves, in any case.

Holmes tells me that he plans to cover the inquiry on the Media Watch website, and on The Drum. A lot better than nothing, but not enough in my view.

The lack of more coverage is also one of the consequences of the killing of the ABC Radio National Media Report many moons ago now. That was a bad decision (and will be reversed next year with a remounted media program). We live in an era when almost any story is to some extent a media story, and no industry is changing faster, or with more implications for broad civic health.

Surely, at the very least, ABC management could have planned a few specials over the summer. I asked this morning if it had done so. They say:

“Of course the ABC will cover the media inquiry hearings: on news, radio current affairs like AM and PM, current affairs programs like 7.30 and Lateline. It is likely that this issue will also attract analysis through The Drum online and on TV.

“It is simplistic to suggest the only way the ABC would cover this inquiry, or indeed any stories worthy of coverage 52 weeks a year, through one weekly, quarter of an hour television program. Media Watch plays an important role, but it is not the only way to cover the story.”

True, but it is the venue on the ABC for critique and analysis of the media. Surely the budget could have been given a boost, just this once. 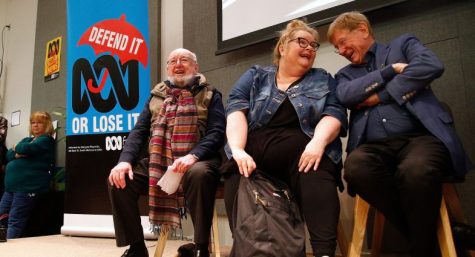 Kerry O’Brien: imagine a news landscape without the ABC

Funding has ruined our Media Watch fun, no doubt about it.

Meantime, mega-dollars from the ABC budget were ploughed into the banal drama lightweight ‘Crownies’.

I agree with the academic year at the ABC, but what really annoys me is the five day public service week that operates on television news with the weather announcements. From Monday to Friday we have the specialist weather guy with charts and flows and everything. On Saturday and Sunday we have the utility announcer reading the weather with no outside help.
Sure, they do a good job of it, but arguably viewers are more interested in weekend weather than during the working week. Is this some public service hangover? Has it anything to do with actually putting out a seven day news service?

I’d prefer to get rid of ABC ’12’ (24) and have the resources put into programs that cover things much better.

What does funding limitations even mean? Are these various staff–from presenters, producers, researchers to cameramen–not paid for almost 4 months? (Like in the USA where teachers are technically not paid during official holidays and do in fact often work other jobs?) Do they go into hibernation? Can Margaret enlighten us to the mysteries of how it works.

I think Media Watch is the most important program on the ABC and should really be extended to half an hour. It’s a classic case of the role of a public broadcaster in providing services that commercial media will not or cannot provide. Any commercially funded media watchdog service risks being compromised.

As to the canning of the Media show on ABC radio national, that made absolutely no sense at all – presumably another victim of Maurice Newman’s gradual nobbling of the public broadcaster and turning it into a carbon copy of the commercial channels.

By the way, I’d happy turn my blog The Failed Estate into a beefed up media watch if some philanthropist will fund me.