The Australia Network tender has now joined the storied ranks of disastrous Federal Government tender processes, a list is headed by the notorious Hughes case from the 1990s.

Compared to Hughes, the Australia Network is a tiddler, just $22m a year for a vanity broadcasting service. Hughes exposed serious problems in the way bureaucrats went about tender processes, and saw a lot more procedural rigour introduced into large tenders. In particular, a new class of consultant, the independent probity auditor, proliferated in Canberra. They were procedural specialists who, for a generous retainer, sat in on meetings, considered the paperwork, offered advice and provided a report at the end of the process on how fair it had been and whether all tenderers had been treated fairly.

Given its profile, the previous international broadcasting tender process, in 2005, had a private sector probity auditor. This time around, the Australian Government Solicitor was engaged as probity auditor. It was on the basis of AGS advice that the government terminated the process.

If AGS had been asked for specific advice without being involved in the process, there would have been a strong suspicion the government was trying to manufacture a reason to terminate the process — even the best legal advice is shaped by exactly what question you ask. It of course was trying to manufacture a reason, but AGS’s involvement as probity auditor suggests the government obtained clear, well-informed advice that the process was flawed and unfair to one or both of the parties.

During the 2005 process, the Howard Government came under great pressure from News Ltd to award the service to Sky, with News executives lobbying in Canberra and a steady drum of commentary in support of Sky’s credentials. The Howard cabinet let the tender process proceed unmolested, and endorsed its outcome. That proved beyond Labor’s cabinet this time around.

When Labor was first elected in 2007, it was said Kevin Rudd had big ambitions for the Australia Network, in keeping with his big diplomatic ambitions. This was entirely consistent with past practice. The revived version of the network was a vanity project of Alexander Downer’s, and so it would be for Rudd, who despite the presence of Stephen Smith was his own Foreign Minister.

But Downer, at least, was limited in his ambitions – he wanted to restore Radio Australia’s role in the Asia-Pacific and establish a broadcasting service to address the “arc of instability” from the western Pacific around to Indonesia (this was the late 1990s, post-Asian financial crisis).

Rudd, thinking he was flush with money from the mining boom surpluses, was said to have a bigger service in mind. The GFC fixed that. When the government amended the tender process to expand the operational reach of the service to the Middle East in an effort to acknowledge the significance of the Arab Spring and, more importantly, give the ABC another chance to win, it offered not a cent more in the contract, despite the significantly greater expense required in getting onto an additional satellite or negotiating in-country re-transmission agreements.

As far as DFAT was concerned, there were always two problems with the service (apart from the fact that it could think of better ways to spend $20m). One was the ABC’s pesky editorial independence. For DFAT, if the ABC was going to tender for the service, it should have done so fully on the government’s terms, just like its private sector competitors. But the ABC, which didn’t even want to tender for the service in the first place, always stood fast on its independence. If it operated the service, it operated it on the same editorial policies as any of its other services.

The other was the ABC’s inability to secure extensive rebroadcasting in China. The ABC has a cooperation agreement regarding facilities with Beijing’s chief propaganda arm, CCTV, and last year signed a deal with Shanghai Media Group for content swapping and facilities-sharing. But Sky trumped that with a deal with CCTV to swap English-language news programming. CCTV’s news programming is heavily reliant on party propaganda and said to be the object of ridicule by younger Chinese.

The deal with Sky is part of an aggressive push by Beijing to expand CCTV’s influence and counter the “negative image” of the brutal dictatorship in the western media, including the establishment of a Washington DC bureau. You can see why the sinophiles of DFAT would have looked far more approvingly on Sky’s bid this time around than in 2005.

But the fingerpointing about the leaks goes a little further up the food chain than DFAT. Whereas the Hughes case reflected poor bureaucratic practice, the Australia Network tender debacle reflects problems higher up, in a divided Cabinet and ministers eager to circumvent processes that even the Howard Government observed. 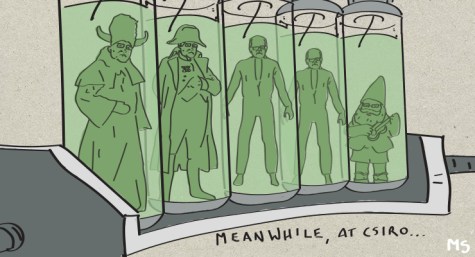 Scott and the spinning Jenny, Josh, prime prime minister and king of the world 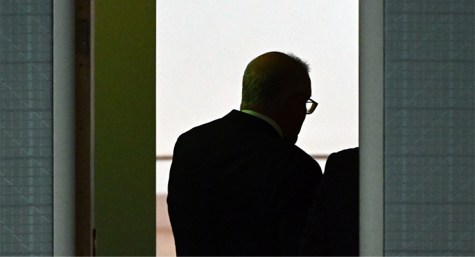 The suggestion here is that Cabinet leaked. I have seen nothing indicating that this was so.

Equally, I have seen nothing to indicate whether or not Rupert’s bunnies disclosed too much or dug out too much about either party’s offers to provide the service – ABC or Sky.

Until the facts are on the table, I cannot agree that politicians, staffers, bureaucrats or ABC were the seat of the fire. I find that it is tidy and saves effort to suspect Rupert first in all matters involving skullduggery, then only to change my mind if contrary facts emerge.

I just love the fact that totalitarian China’s TV network is called CCTV.

Editorial independence of the ABC? Long time since that was the case!

This has been a complete fiasco completely of the government’s own making. They should never have held a tender process in the first place, as Australia’s international broadcasting should obviously be conducted by our national broadcaster not a private company. To put it out to tender with the intention of making sure no one but the ABC would win it was plain stupid.

It’s clear that News Ltd has been running a pro-Sky, anti-ABC campaign throughout the whole process, with the ABC largely unable to defend itself as it was bound by the tender rules to not comment on the process. Sky was, of course, bound by the same rules, but News Ltd, despite its close connection to Sky, was not. It is also apparent that certain pro-Murdoch elements within the government and/or public service have been leaking information designed to present Sky’s bid in a good light and make it difficult for the ABC to win the contract.

This is the best result in the circumstances.
To allow Murdoch to run it would be a disaster.
Please leave it in the hands of the ABC.