A troubling report on Europe

A report to be released today by the Demos think tank draws attention to the growth on the continent of extremist right wing political groups.

A troubling report on Europe. There’s a clear tendency for economists and financiers struggling to find a solution to Europe’s sovereign debt problems to forget about what the people actually think. Yet a report to be released today by the Demos think tank draws attention to the growth on the continent of extremist right wing political groups. 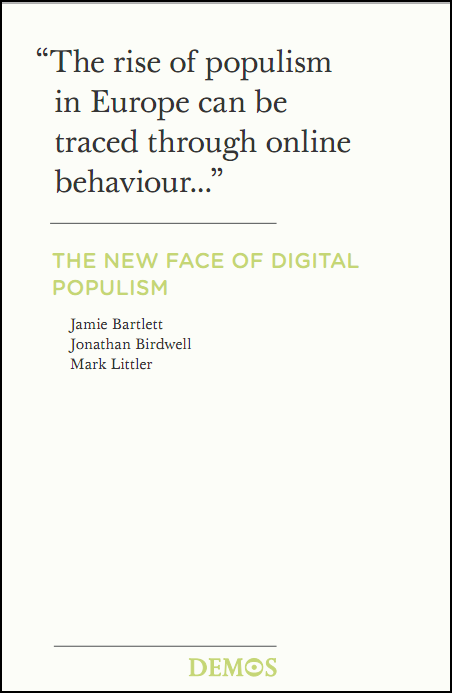 While so far the attraction of such groups to young people appears to be motivated more by anti-immigration and and especially anti-Muslim sentiments than economic conditions it is the young disproportionately affected by the unemployment caused by the prevailing policies of fiscal austerity. Worse, I fear, is yet to come than what Demos reports is already scary enough.

It describes how over the last decade, populist parties have been growing in strength across Western Europe.

These parties are defined by their opposition to immigration and concern for protecting national and European culture, sometimes using the language of human rights and freedom. On economic policy, they are often critical of globalisation and the effects of international capitalism on workers’ rights. This is combined with ‘anti-establishment’ rhetoric and language. Often called ‘populist extremist parties’ or ‘the new right’, these parties do not fit easily into the traditional political divides.

Their growth over the past decade has been remarkable. Formerly on the political fringes, these parties now command significant political weight in the parliaments of Austria, Bulgaria, Denmark, Hungary, the Netherlands, Sweden, Latvia and Slovakia, as well as the European Parliament. In some countries, they are the second or third largest party and are seen as necessary members of many conservative coalition governments. The growth of these movements is mirrored online.

Populist parties are adept at using social media to amplify their message, recruit and organise. Indeed, the online social media following on Facebook and elsewhere for many of these groups often dwarfs their formal membership, consisting of tens of thousands of sympathisers and supporters. This mélange of virtual and real-world political activity is the way millions of people—especially young people—relate to politics in the twenty-first century. This nascent, messy and more ephemeral form of politics is becoming the norm for a younger, digital generation.

Methinks they don’t like him. The Courier Mail was at it again this morning with a strange attack on Queensland Liberal National Party  treasurer Barry O’Sullivan over what most readers of the paper would surely regard as a light hearted joke-bet with a mate. 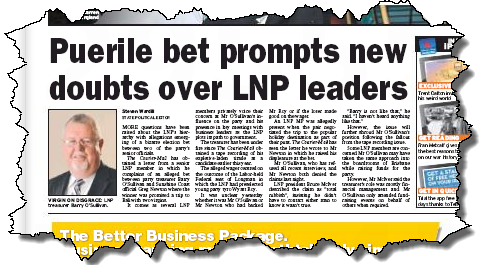 The O’Sullivan offence was to have a wager with Sunshine Coast LNP official Greg Newton over who would win the Labor-held Federal seat of Longman with the payoff being a trip to Bali with two virgins. New questions have been raised in Queensland about the Liberal National Party’s hierarchy,” declared the page three yarn, “with allegations emerging of a bizarre election bet between two of the party’s senior officials.”

This latest supposed expose follows another recent Courier Mail  “revelation” based on a a tape recording of Mr O’Sullivan’s ” expletive-laden tirade at a candidate earlier this year.”

United States influence on the slide. There once was a time when the United States ruled supreme. But no longer. And there is one simple measure of the decline. Golf.

Back in the 1980′s when the major golfing tours of the world jointly set up a World Golf Rankings it was players from the USA who dominated. Nearly 60 of the top 100 ranked players were Americans. These days the number is down in the 30s. 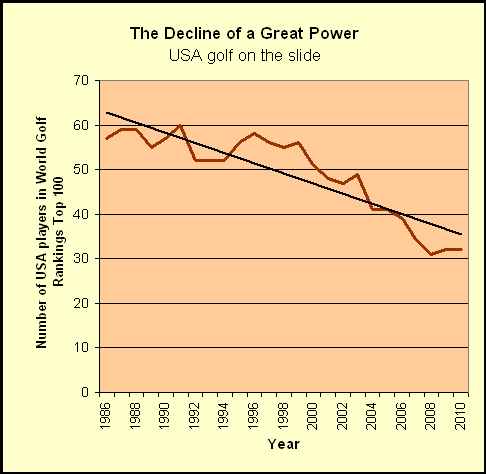 So it is that a team representing the USA it is not even favourite to defeat a rest-of-the-world team that excludes players from Europe. The market on the President’s Cup to be played for in just under a fortnight’s time has the Internationals as a 52% chance of winning to the USA’s 48%.

The current World Golf Rankings has 39 US players in the top 50 which is better than it has been in recent years but a figure that is likely to fall before year’s end. Whereas the US professional tour has finished for 2011, the European still has some major contests to go that will see players from that tour with an opportunity to pick up further ratings points.

An unpopular visitor. When Barack Obama addresses Australia’s House of Representatives later this month he will do so as  far less popular president at home in the United States than most of his predecessors since the pollster Gallup began measuring approval ratings.

Perhaps that’s the reason he appeared to be getting on so well with Julia Gillard as shown in those photos last week from the G20 conference in Cannes! A low approval rating certainly gives them something in common.

With a year to go Obama clearly has a re-election contest on his hands. 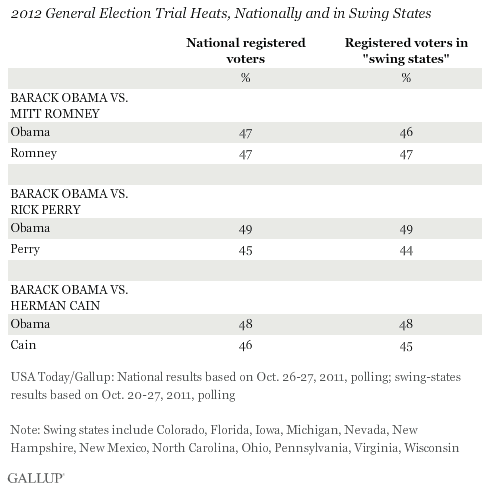 With two years to go, Julia Gillard seems to have an even tougher job although there has been  modest improvement over the last couple of weeks in Labor’s standing on the Crikey Federal Election Indicator. 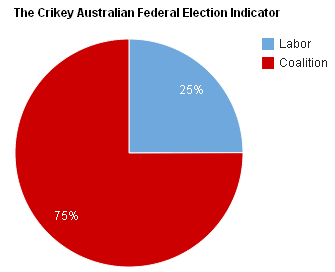 It’s not the bet that was the issue – it’s who won and did they go?

You got the colours on the graph the wrong way around for Labor and Coalition.

Meski
Ah the laziness that comes from using the automatic Microsoft suggestion. I promise to rectify it next time!