No wonder David Jones is doing it tough -- it blocked public entrances to its Elizabeth Street store this morning because of the arrival of two of the world's great lightweights, sisters Kim and Khloe Kardashian. Plus other media news.

Great moments in media and retailing. No wonder David Jones is doing it tough — the company blocked public entrances to its huge Elizabeth Street women’s store in Sydney this morning because of the impending arrival of one of the world’s great lightweights, sisters Kim and Khloe Kardashian. Kim is the one who has updated almost instant divorce (72 days her latest marriage lasted); Khloe is famous for being Kim’s sister.

Their status as instant somebodies saw David Jones lose control of its senses and arrange a glitzy function at the flagship store. It barred entrances from the most obvious routes and would-be customers were forced to walk down to the new Westfield to get in. The Kardashian sisters were due to launch a range of handbags at 10.30am — but they were late, just as they were late by an hour for a function in Kings Cross last night.

Their visit also sparked a silly claim and counter claim last night from Ten and Seven about who had an exclusive on the first interview with Kim. Ten issued a statement twice yesterday, which read in part:

“On the attached FTP is a compressed file of the interview that TEN’s Entertainment Reporter Angela Bishop did with Kim Kardashian this afternoon. It was her first interview since the announcement of her divorce, and she broke her silence on plans for the wedding presents, her ring, and how she’s pleased to be in Australia to take her mind off things. If audio or vision from the attached FTP file is used it must credit TEN news.”

Seven was promoting its exclusive interview with Kim Kardashian on Today Tonight last night. The segment floated away, it was that lightweight. — Glenn Dyer

Seamus Bradley will move to the world desk next week.

David Rood will move to a news-editing role on The Sunday Age.

Please see me if you would like to be considered for the role of state political correspondent.

Bradley was an associate editor of The Sunday Age and Rood was working the Spring Street beat. As we reported earlier this week, The Sunday Age will soon bid adieu to senior writer Michael Bachelard who is heading to Fairfax’s Jakarta bureau starting in January. — Andrew Crook

The Oz pumps paywall via Fitness First. A Crikey reader forwarded this on to us this morning. We enjoyed this line from The Oz/Fitness first copywriters: “You’ve exercised your body, now it’s time to exercise your mind.” We wonder if this offer is eligible to The Australian staff … 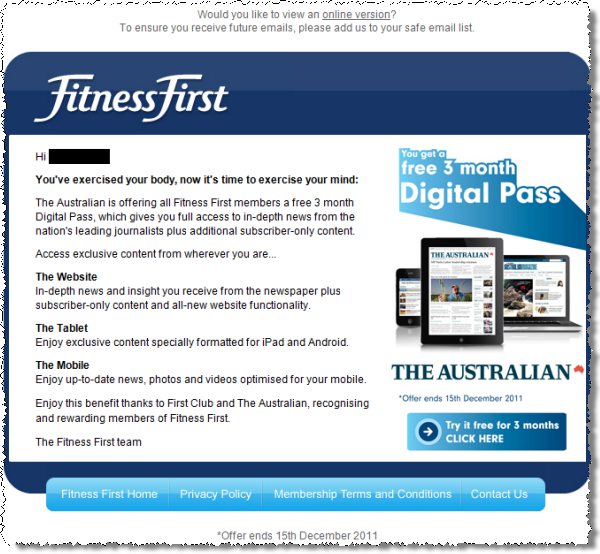 Front Page of the Day. France’s Le Figaro leaves no one guessing what they think of Greek PM George Papandreo on its front page today: “Papandreou, the man who puts the euro at risk” … 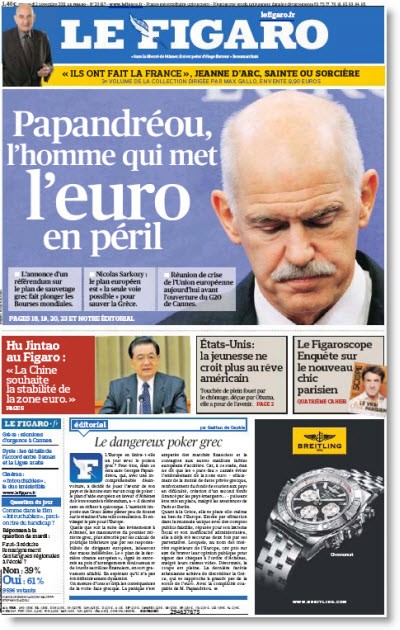 “The adult Murdoch siblings saw a family therapist last year to discuss succession at the media empire built by their father, Rupert Murdoch, an article to be published in the forthcoming issue of Vanity Fair is to claim.” — The Guardian

“Privacy Commissioner Timothy Pilgrim wants the media to be subject to more stringent privacy controls even though his office rarely receives complaints about news organisations.” — The Australian

“The office of a French satirical magazine here was badly damaged by a firebomb early on Wednesday, the publisher said, after it published a spoof issue ‘guest edited’ by the Prophet Muhammad to salute the victory of an Islamist party in Tunisian elections. The publication also said hackers had disrupted its Web site.” — New York Times

Paywalls: the good news and the gamble

“The Australian’s online paywall is up and running. The New York Times has announced strong subscriber figures. Peter Clarke discusses the prospects for paid content with Gordon Crovitz, Sophie Black and Jason Wilson.” — Inside Story