The Australian Press Council has launched a fresh probe into The Australian's foreign editor Greg Sheridan over the use of the phrase "illegal" to describe asylum seekers after repeatedly flouting a recommendation to stop.

The Australian Press Council has launched a fresh probe into The Australian‘s foreign editor Greg Sheridan over his use of “illegal” to describe asylum seekers, after the decorated columnist repeatedly flouted an earlier recommendation to stop.

As Sheridan presumably girds his keyboard this morning to respond to the tragic drowning deaths of dozens of asylum seekers off the Indonesian coast, Press Council executive secretary Jack Herman has confirmed the regulator had received a new complaint highlighting his re-deployment of the rogue descriptor.

In a front-page piece on October 14 reacting to the government’s shelving of the Malaysia Solution, Sheridan tapped out the barred bon mot on four occasions (“Illegal immigrants and the people who smuggle them can mark this down as a magnificent victory over the Australian political system” / “It makes a mockery of the government’s previous position that it is not Australian policy, or pull factors, but the conditions in the source countries, or push factors, that cause this determined illegal immigration” / “Illegal entry by boats will now be quicker, easier and cheaper than the lengthy process of trying to come here as an immigrant” / “Australia will now be subject to determined illegal immigration by people who have not undergone a selection process by Australian authorities”.)

Sheridan had previously been told to cease and desist. In an APC adjudication published in The Australian on June 20, as required under its membership of the Press Council, it had been made abundantly clear that the “inaccurate” and “unfair” phrase was out of bounds and that “asylum seeker” should be used instead. The Press Council’s guideline no. 288 spells out how journalists should refer to people seeking asylum:

“The Council believes that the term ‘asylum seeker’ is a widely understood descriptor, generally a fair and a sufficiently accurate one, and one which avoids the kinds of difficulties outlined above. The Council recommends its use as the default terminology in relevant headlines and reports both by the press and others.”

And as activists have repeatedly pointed out, under the UN Refugee Convention — to which Australia is a signatory — a person is lawfully able to enter a country for the purposes of seeking asylum, regardless of how they arrive or whether they hold valid travel or identity documents.

The June complaint was submitted by James Sharp and related to Sheridan columns on October 23 and 28 last year and March 5 this year. In its judgement, the APC noted The Australian was fully aware of its preference, having been the target of a another upheld complaint brought by “A Just Australia” in 2009.

Herman told Crikey this morning since the APC had issued its guideline it had received a positive and compliant response from most sections of the media. However, some journalists such as Sheridan had decided to stand their ground. There were also problems when politicians and officials used the term publicly — in that case “it was hard to expect journalists not to do the same”.

Unfortunately for Sheridan, the APC found his use of “illegal” in the March 5 column in relation to Senate debate had not in fact been uttered by any senator. Also, according to the Council, the fact the pieces constituted analysis or commentary rather than hard news was no excuse.

News Limited is understood to be currently preparing a response to the latest complaint. It will also prepare a submission to the federal government’s media enquiry led by retired judge Ray Finkelstein and journalism academic Matthew Ricketson, which is expected to examine the role of the APC.

Sheridan did not respond to three questions sent to him this morning in relation to the matter. 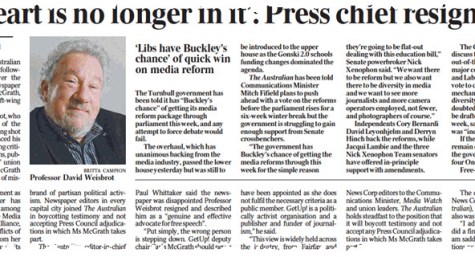 I am no great fan of Sheridan though his knowledge and contacts mean
that it is often possible to get something from his articles. However,
I am all in favour of him sticking to his guns rather than have some
outside body tell him how to express himself.

As to the question of using the phrase “illegal immigrants” it is not even
clear linguistically or technically that it is a blatant misuse of language.
There are no doubt some technical (i.e. technical legal in one pretty
clear sense of “legal”, to wit, as part of the corpus of law) uses of “illegal”
but mostly, and in the press, it is used in a colloquial non-technical
sense when used as an adjective. Thus “illegal substance” is pretty
loosely used to mean something that it is against the law (but, if so
criminal? or civil? or regulatory?) to use in some way or, but only
maybe, against the law in one of the possible ways to sell or keep or
whatever. Obviously “illegal immigrant” doesn’t pick up any of those
uses of illegal as an adjective. It therefore invites speculation about
its ambiguity or uncertainty of application. Is it perhaps saying that
these people who are (again loosely) called “immigrants” have not
complied with all the laws which would allow them to claim lawful
resident status. Maybe not, but the point is that it is a bit of a
Humpty Dumpty word.

Of course it is quite likely that it is used either for jouralistic or sub-
editorial shorthand convenience, or as a rhetorical symbol which
in an ongoing debate amongst people who know perfectly well what
they think and what they think of the words used. The trouble with
many committees is that they feel that, by reason of their very
existence and the human desire to be seen to do somethng
significant they must express an opinion beyond saying “p**s off
and deal with the trivia yourself”.

@Iskander Of course it matters when a group of people is described as illegal. You can do things to illegal groups that you might not do to innocent people. Illegal groups are responsible for their own predicament and must take the consequences. We have to remember that one of the circumstances where we’ve decided that people can come to Australia is If they are seeking asylum.

I don’t care what label you use, they are forcing their way into our country without invitation. We cannot solve the whole world’s problems by throwing open our doors to every unemployed goatherd wanting a new career as a social welfare recipient!

Semantics aside, seeking asylum is not illegal per se, but how many hundreds of thousands do you want? The easier you make it to come the more you will get. every so-called asylum seekers is placing additional pressure on our social welfare housing and education systems, funded by the poor bloody Australian taxpayer is who is being shafted up the butt with carbon taxes, flood levies etc, and being told that they are guilty if they object to this influx.

The other interesting aspect of this influx is that in many respects it is not socially harmonious with overall Australian cultural values, and the social and religious value sets are quite different. Furthermore many of these individuals have no useful skills, and will be a permanent drain on social welfare resources.We are already facing pressure for sharia law from some quarters, and this pressure will intensify if the UK experience is any guide.

Sheridan is amongst a group of commentators on international affairs who dress narrow polemics up as reasoned analysis. This guy is a propagandist from way back.

The asylum seeker issue is fuelled by hysteria and incendiary demonising by his ilk and finds a largely credulous audience with their ready prejudices (like this twit above), ready to disbelieve the legitimate claims of asylum seekers who didn’t stand in a non-existent queue of orderly people waiting for whichever repressive regime they are escaping to allow them to migrate, or a third world stopover suffused with social and economic disadvantage. The silliness of this position overwhelms me at times.

The history of propaganda reveals you can package lies very successfully if they play to irrational fears and prejudices – it is especially difficult to counter when cloaked in the garb of ‘border security’. So the term ‘illegals’ is tailor made for the job!

The Coalition’s constant vilification of Labor for being weak on border protection has now morphed into a hypocritical concern for the rights of refugees. These of course – yes, you guessed it – will be protected on Nauru.

But how can anyone forget the Libs’ response to Tampa and kids overboard? Blame the victims for their own plight, extract as much sensationalism out of the role of people smugglers, put words in the mouth of ADF personnel who cannot answer for themselves, and then whip up public sentiment against refugees. Throw in dollops of confected outrage over your political opponents complete lack of preparedness to face down the ‘threat’ and you have your stock in trade ‘dog whistle’ response to the terrible plight of some of the most vulnerable people on the planet.

Oh, I forgot – then you can set about making weak neighbouring countries complicit in policies that violate human rights! Sadly, the Labor government fell in behind this construct too easily! It now has an opportunity to put things right.

Is it possible that our general decency might be something Australians can be proud of again? A sensible, humane and orderly approach to offshore processing, which involves regional partners to their benefit, could be a crucial element to stymie the smuggling trade, whilst enabling on-shore processing within the community after mandatory health checks are completed in short-term detention.

Arrangements with key community groups to manage welfare, work-for-allowance strategies and language training could be developed to integrate asylum seekers in the larger society soon after their arrival. Regional areas with labour shortfalls could be targeted for short-term settlement in this respect.

The UNHCR & IOM could be brought in as partners in the process to lend their mandated legitimacy to the exercise. Isn’t it time to stop playing the narcissistic school-yard drop-kick with the bullying posture and derogatory language and start behaving like responsible grown-ups?

@kraken
This is a typical response from the Lotus eaters who see no problem with the opening of our borders to anybody who wants to turn up on our doorstep. It is all well and good to get your rocks off by siding with a popular cause, but what about the social and economic cost to Australia. How many hundreds of thousands of so-called refugees do you want? What proportion of Australia’s budget do you want to apply to this purpose?

There are potentially tens of millions of refugees in the world and we can’t take them all. Should those with the wherewithal to pay for people smugglers buy their way to the head of the queue condemning other less economically fortunate refugees to remain permanently in refugee camps?

If we are to have controlled refugee access into our country, who should administer it, the Australian government or people smugglers? Address the real issues and stop being so self-indulgent.